Own Your Very Own Firewood-Powered Truck For $4,500 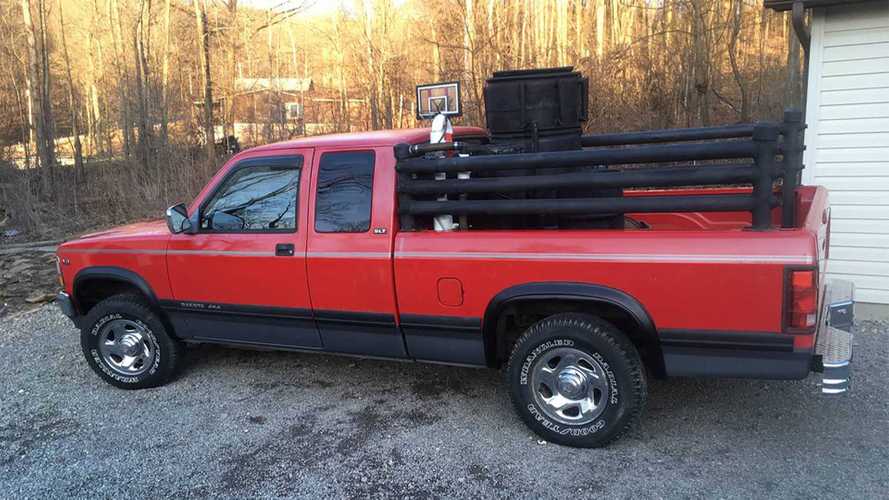 It will still run on gasoline, too.

The Chrysler Turbine cars could run on an assortment of different “fuels” – diesel, jet fuel, vegetable oil, and even tequila. It was an ambitious experiment in the early 1960s that looked at alternative fuel sources, but it was never as ambitious as this 1995 Dodge Dakota that’s listed for sale on Craigslist. It runs off not only gasoline, but also firewood thanks to a gasifier contraption in the truck bed.

The ad says the Dodge “runs great,” it has a “solid body,” it’s in “nice shape,” and it’s “very dependable.” The truck retains its carbureted V8 engine and automatic gearbox. The photos show a clean-looking truck, too. The red paint looks a tad faded, but that could easily be attributed to mediocre image quality. If there is any rust, we can’t see it, and we can’t spot any significant dings or dents either.

Check Out Other Cool Cars:

Weird Ford F-250 Takes Chopping The Top To The Extreme

It runs on gas like any other truck, but it is equipped to run on firewood through a wood gasification process, which turns wood into fuel under extremely high temperatures. The listing says that the equipment can be easily removed from the truck if you don’t need it. It can also, apparently, power an external generator. It’s not as exciting as using tequila, but why waste good alcohol?

The seller is asking $4,500 for the truck, which doesn’t seem outrageous, considering you can remove the gasifier and have yourself a regular pickup truck. The truck has 98,000 miles on the odometer, and that lines up with the well-kept body. Gasifiers have been around since the birth of the automotive industry but only gained popularity during the fuel shortages of World War 1. A quick internet search found an assortment of late-model vehicles using gasifiers instead of gasoline. It’s an alternative fuel source that never caught on and has remained a hobbyist activity.