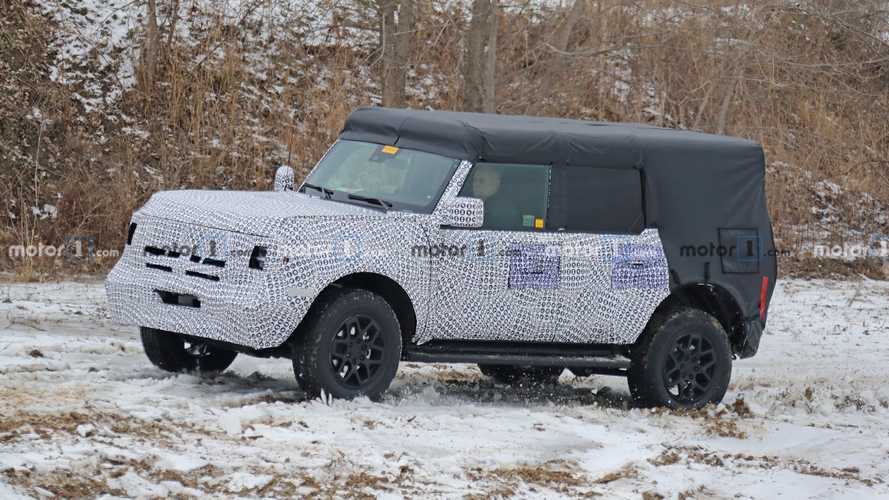 The upcoming 2021 Ford Bronco has to be one of the most anticipated new models set for unveiling this year. Ford confirmed the model way back at the 2017 Detroit Auto Show, and numerous spy photos since then have shown the Bronco in the early stages of development. But today, new spy photos show a Bronco that’s much further along in the development process. While there’s plenty of camouflaged hiding the SUV’s true design, the boxy shape is undeniably Bronco-like.

The square design is difficult to miss, though there’s plenty of padding disfiguring much of the design underneath. The roof looks especially bulky, possibly hiding the long-rumored removable roof panels. Padding at the front and rear hide the finder details of the Bronco’s upright design. Without a clear picture of the front, it’s difficult to determine if the Bronco headlight photo leaked at the end of last month matches; however, they appear similar.

The boxy design gives the Bronco short front and rear overhangs, which will appeal to off-road enthusiasts. Ford’s been adamant since announcing the Bronco’s return that the new one would be a real, no-compromise, off-road vehicle capable of keeping up with the likes of the Jeep Wrangler and Toyota 4Runner. The spy photos show a spare tire on a swing gate that sits between what looks like production-ready taillights, and plenty of ground clearance, too.

The Bronco spied here is the four-door version. There will be a two-door variant, too, just like the Wrangler. The new spy photos show a shape that’s similar to the Bronco R Ford revealed last November, which should please enthusiasts who wanted to see the Bronco retain its iconic square design. A pickup truck variant is possible that could use the 2.3-liter EcoBoost engine and 10-speed gearbox from the Ford Ranger.

Now that Ford has moved onto what appears to be near-production-ready Broncos, a reveal can’t be too far away. Ford has said it’ll unveil the new Bronco this spring. New rumors suggest that could happen at the Detroit Auto Show this June, which happens just before the beginning of summer on June 20.