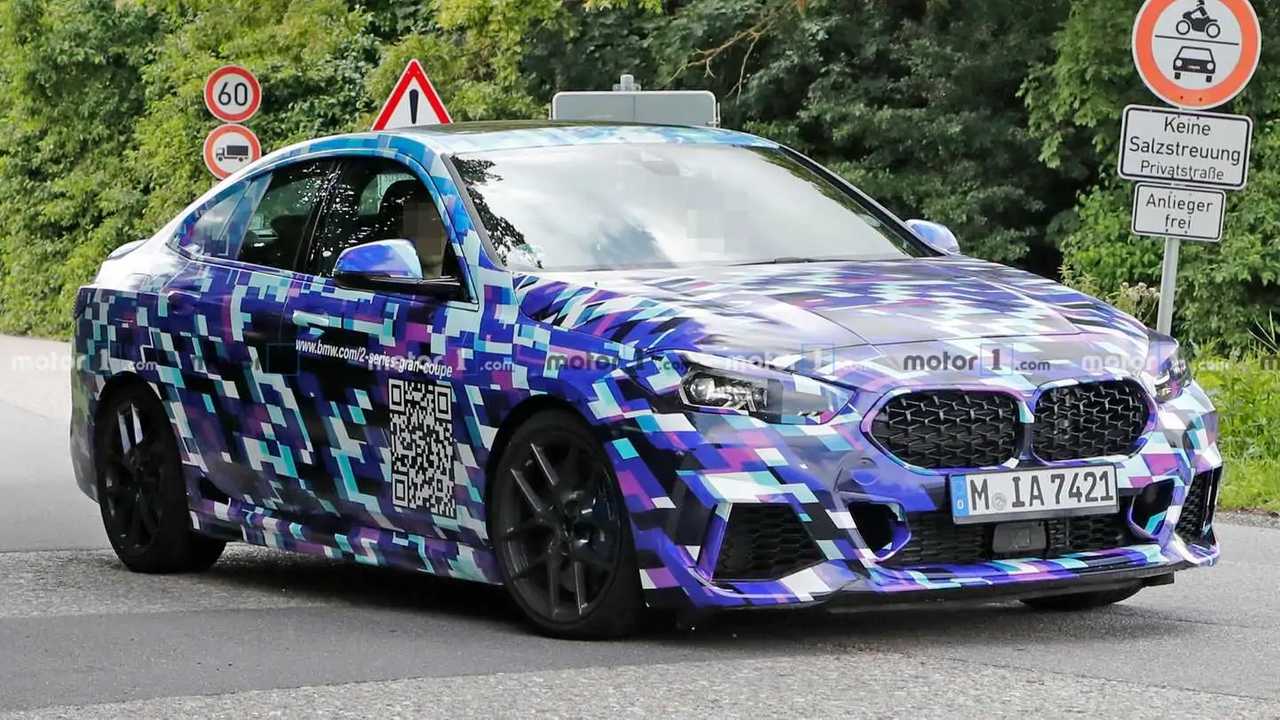 It appears to be the hot M235i model.

Not to be confused with the 2 Series Gran Tourer, the 2 Series Gran Coupe is a new entry in BMW’s ever-growing portfolio. Our spies got up close and personal with a near-production prototype of what will be Bavaria’s belated rival for the Mercedes CLA, now in its second generation. Caught wearing a funky body wrap rather than conventional camouflage, the swoopy sedan looks virtually ready to hit the assembly line as it appears to have all of the final bits.

Mind you, this is not an ordinary 2 Series Gran Coupe as we have reasons to believe it’s actually the range-topping M235i xDrive model. How can we tell? Well, it has the exact same front grille pattern as the newly launched M135i five-door hatchback from which it has also borrowed the blue brake calipers adorned by the M logo. The chunky air intakes up front and the angular dual exhausts at the back further reveal the model’s identity, as do those “vents” in the corners of the rear bumper. The lowered sports suspension is another telltale sign we’re dealing with the flagship version.

After accessing the website written on the prototype’s front doors, we discovered something interesting. Head to www.bmw.com/2-series-gran-coupe and you’ll find the model’s dedicated page showing the already revealed teaser image accompanied by the following message: “Take a first glance at the all-new BMW 2 Series Gran Coupe from July 24th on this page.” In other words, it looks like we’ll see more of the stylish sedan in a week from tomorrow. Whether it will be a more revealing teaser or the full debut is not known at this point.

Getting back to the prototype at hand, it will ride on a front-wheel-drive platform like all the other 2 Series Gran Coupe models and the next-generation 1 Series. As it is the case with the aforementioned M135i, its more practical sibling will come as standard with AWD. Motivation will be provided by BMW’s most powerful four-cylinder engine ever installed in a road car, a 2.0-liter with 302 horsepower (225 kilowatts) and 450 Newton-meters (332 pound-feet) of torque or the same you get in the X2 M35i small crossover.

A New "Coupe" Is Coming:

We’re expecting the M235i Gran Coupe to be slightly heavier than the M135i, which means it probably won’t match the 0-62 mph (0-100 kph) sprint in 4.8 seconds of the hatchback. As a side note, the five-door model will get an optional M Performance Package that’ll shave off a tenth of a second, so expect the equivalent 2 Series Gran Coupe to receive it as well. As for top speed, BMW will install an electronic limiter programmed to kick in at 155 mph (250 kph).

The German marque has shot down rumors of a 400-hp M140i, which likely means the chances of seeing a BMW competitor for the Mercedes-AMG CLA 45 / CLA 45 S are slim.