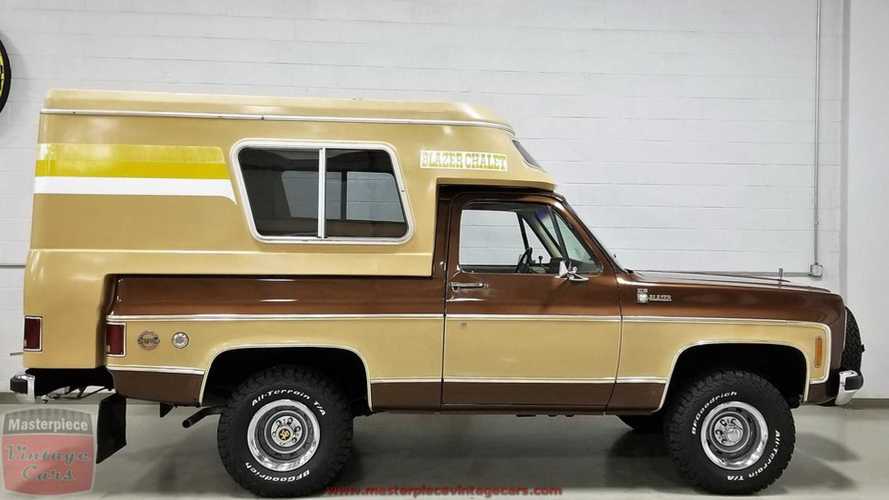 Do you have room in your garage?

Converting off-road vehicles into campers isn’t a new trend. Back in the late 1970s, General Motors built the Chevy Blazer Chalet camper, a converted Blazer with a tiny camper attached. Over two years of production, Chevrolet sold just 1,800 Chalets. While they are rare, one is up for sale through Masterpiece Vintage Cars, which has a 1977 Chevy Blazer Chalet camper eager for a new home.

Jurassic MegaRaptor Overlander Has No Equal In Off-Road Camping

According to the listing, the camper is stock and unrestored with an estimated 52,401 miles on the odometer. Powering the four-wheel-drive adventure-mobile is a 400-cubic-inch, four-barrel V8 paired with GM’s Turbo Hydra-matic gearbox and full-time four-wheel drive. Now, this coming from the late 1970s it’s reasonable to expect a bare-bones camper, but that’s not the case with this 1977 Chalet. It features power steering and brakes, factory air conditioning, tilt steering wheel, factory plaid seats, dinette table, and rally wheels.

The camper itself is small, yet it was optimal when new. The camper features a kitchen with a refrigerator and cooktop. It can seat up to four while sleeping two. The camper also features a pop-off roof that provides over six feet of headroom. The camper shell is made from fiberglass reinforced plastic over a steel frame. While there are few interior blemishes – it is over 40 years old – the interior is remarkably clean.

Masterpiece Vintage Cars lists the Chalet’s price at $29,900, which, while expensive, feels like a steal considering its rarity and age. This would be the perfect getaway camper for someone who enjoys vintage cars and vintage campers. It may not have the latest features, gadgets, and campaign gizmos, but it’s unlikely you’d bump into anyone else cruising around in a 1977 Chevrolet Blazer Chalet camper. And if you do, you two would have something to talk about.