Lego Hoonicorn Mustang Is Most Insane Custom Technic Build Ever

It's radio controlled with dual differentials and details galore.

Just recently, Head Hoonigan In Charge Ken Block dropped a strange-looking picture of his Hoonicorn Mustang on Facebook. Turns out the car was actually a Lego recreation, and a quite good one at that. It’s not one of the bonkers full-size creations we’ve seen recently, like the McLaren Senna or VW T2 Camper Van. This one is better, because it’s something we can actually build – and drive – for ourselves.

Being fans of Block’s tire-slaying antics and certified Lego nerds we were compelled to learn more about this custom creation, so we shot a message to the mastermind behind this project, Lachlan Cameron. Yes, this is straight-up a 100 percent Lego build with no custom parts created, though Cameron did say it has quite a few chromed pieces. It’s a My Own Creation (MOC) Technic project that, aside from looking fantastic, is also radio controlled with WiFi-enabled controls through a smartphone.

It’s designed to run on a couple different types of motors, and Cameron spent a significant amount of time creating a detailed suspension setup with front and rear differentials to give it some realistic motion. The gear shifter inside the car even moves, and speaking of which, check out the interior detail. The doors and trunk open, as does the hood where a V8 engine resides complete with moving pistons. The only thing missing from this build is a set of bald, smoking tires.

Cameron was kind enough to let us post some of his photos on the Lego Hoonicorn, but you have to jump over to his site at Rebrickable.com to see just what all went into this car. Cameron’s been building custom Lego projects for three years, with designs like this mental Mustang taking between 1-3 months to complete. And the best part? Even though this isn’t available as a kit, Cameron has instructions and a parts list available for those interested in having a Lego Hoonicorn of their own. 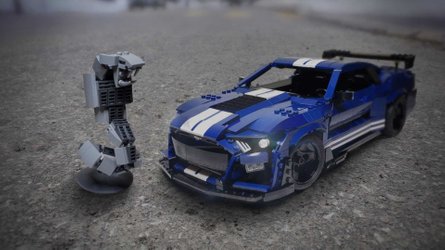 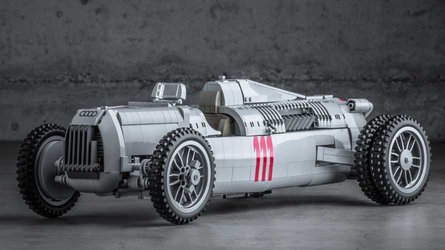 Special thanks to Lachlan Cameron for sharing photos and the backstory of this build with us.