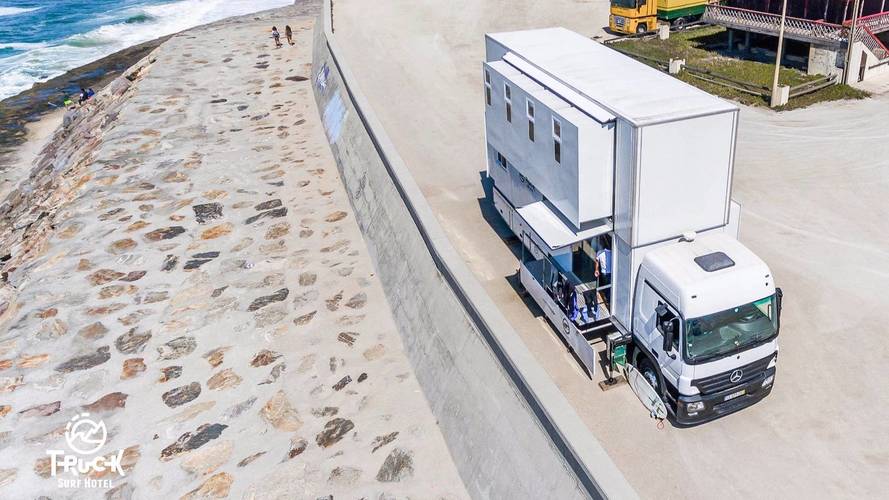 This is a great idea for your next family trip.

Traveling in RVs and Campers in the U.S. is common. We have seen a lot of these vehicles-turned-rolling-homes around and most of them are really great, more than livable, to say the least.

However, some people took this mobile lifestyle to another level, and converted an Actros, which is essentially a workhorse truck built by Mercedes, into a cool hotel-on-wheels that offers adventure and surf trip packages. Their mission? To share the lifestyle with adventure-seekers and travelers.

Check out these other cool modified vehicles:

Truck Surf Hotel is the brainchild of Daniela Carneiro and Eduardo Ribeiro, who took inspiration from their experiences in order to formulate the concept of the hotel. The two have been traveling for years in a camper van, exploring both Europe and Africa for different cultures and surf sports. They created the concept of Truck Surf Hotel so other people can experience the bliss of uncrowded surf spots, as well as different natural parks and mountains, while living in a luxurious hotel on wheels.

With this in mind, Truck Surf Hotel offers adventure and surf tour packages in Portugal (June to October) and in Morocco (January to April). Although the things you will do in the tour have already been set, you can still tailor-fit the itinerary to your liking. Well, based on the FAQs on their website, looks like they are easy to talk to. Carneiro is the on-board travel guide and photographer, while Ribeiro is the surf coach.

With hydraulic system that allows expansion of walls and ceiling, the 2-story Truck Surf hotel offers comfortable accommodation for its occupants, not to mention its great interior setup and vibe. It has five air-conditioned rooms in total, with four rooms having individual double bunk beds and one private room for couples. Traveling alone is recommended by Carneiro and Ribeiro as they want to “create an environment where people get to know each other through epic adventures.” However, if you’re traveling with your family or friends, they have group packages, too.

One week package tour in Morocco starts with $588 (499 Euros) per person, while the Portugal trip starts at $724 (614 Euros) For complete rates and other details, visit the Truck Surf Hotel's official website.

Here’s a closer look at the Mercedes-Actros-turned-2-story-hotel: