The man behind the AMC Gremlin, Pacer and AMX had humility – a rare quality in the styling world. He was a better person for it.

Some would argue that all true artists give outward form to internal issues. A quick glance at Dick Teague’s resume wouldn’t lead you to suspect otherwise; he must have had serious inner strife – how else can you explain the AMC Pacer?

Except this is to trivialise the work of one of the most consistently resourceful automotive designers of the past five decades; one who could rustle up a new model armed with little more than a vivid imagination and access to a parts bin. Often on the back foot, and starved of finance, he knew how to make a little go a long way.

In a life pockmarked with incident, Teague overcame numerous obstacles to style some of the most easily recognizable cars ever to emerge from North America – or indeed anywhere else, for that matter. However, his name languishes in a netherworld between fuzzy appreciation and absolute obscurity, at least beyond the design community.

So, while the likes of Harley Earl and Bill Mitchell continue to garner veneration, and Gordon Buehrig and Howard ‘Dutch’ Darrin cult status, it’s about time torches were lit for the man who pulled off a seemingly impossible task: he made AMC hip.

Born in Los Angeles on Boxing Day 1923, Richard A. Teague was fortunate to reach adulthood. An accident-prone and often perilously ill child, he nonetheless left an early mark after his artist mother Thia landed him a role in the popular series of Our Gang movie shorts, a gig that rendered him a her, as Dick became Dixie.

Yet his showbiz career proved a fleeting one. Riding in the back of a car after a day’s filming, he didn’t make it home after a drunk driver lost control and spun out, hitting the vehicle in which Teague was riding. In the ensuing collision, the five-year-old was propelled through the windscreen. Miraculously he survived but, tragically, he lost an eye. This barely a few years after his father had been killed in a similar accident. 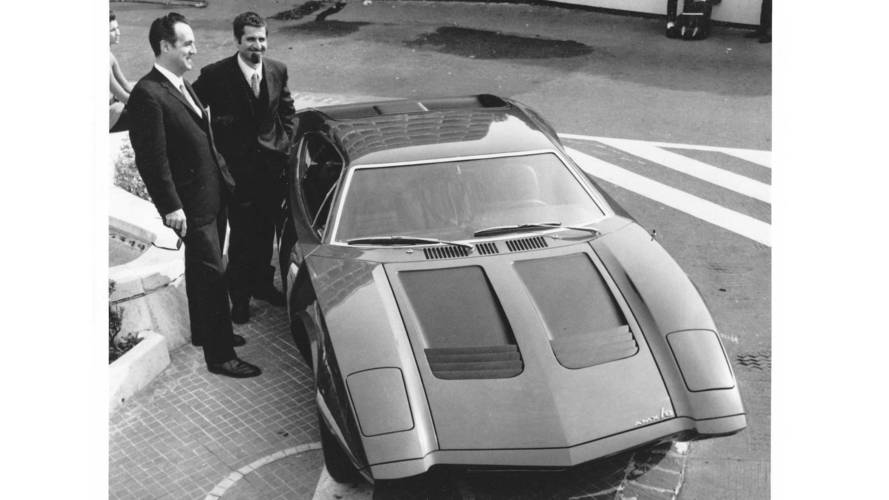 Not that these calamities hobbled young Teague’s drive: by his early teens, he’d discovered hot rodding. A friend and contemporary of tuning deities Ed Iskenderian and Stu Hilborn, the young tearaway took to street racing aboard a ’32 Ford hi-boy roadster before one too many encounters with Johnny Law saw him head for the Muroc dry lakes to get his kicks.

Avoiding the World War Two draft because of his disability, Teague dropped out of art college and took his first professional design job at Northrop Aircraft Corporation. There he worked as an illustrator on the XP-61 Black Widow night-fighter project, before replying to an advertisement in the "personals" section of the Los Angeles Examiner that read: "Interviewing for a prospective automobile designer to come to Detroit and be a part of a growing team of General Motors design staff."

In October 1947 the then-23-year-old aced the interview, and the following March he took his place in the Korean war-depleted styling department. His tenure in the Oldsmobile division was fleeting, the starry-eyed futurist failing to gel with reserved studio head, Art Ross. Loaned out to Cadillac before an equally short-lived return spell with Olds, Teague was consequently "…transferred out of the company."

Other great designers and engineers from the past:

A move to New Mexico with his new wife beckoned, as did a job with a defence contractor that proved unrewarding: the pull of penning cars remained resolute. Fortunately, a phone call from former GM man Frank Hershey would prove life changing: "How would you like to be chief stylist at Packard?"

Armed with archaic in-line engines against hot new V8s, the once-proud marque was haemorrhaging by the turn of the 1950s. Designers at 1580 East Grand Boulevard, Detroit (who included one John Z. DeLorean…) knew they were up against it. However, under the stewardship of Jack Nance, the company came out fighting. With the Teague-styled Packard Balboa and Predictor show queens wowing crowds, it was his Caribbean production car that momentarily staved off the inevitable. When the company finally tanked in 1958, it was time for him to move on once again. 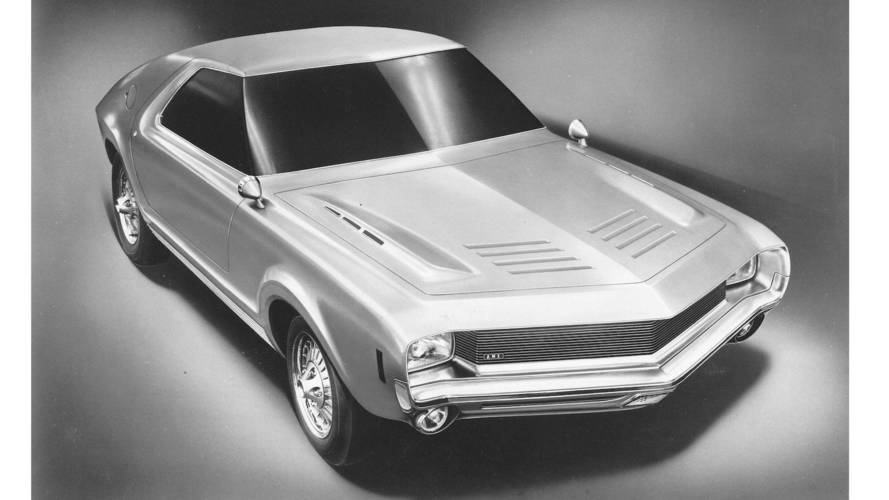 This time it was to Chrysler, where Teague soon became embroiled in an acrimonious turf battle between director of design William Schmidt and vice-president Virgil Exner. These warring factions made working life interminable for Teague, who was ultimately shuffled off along with Schmidt to what was purported to be an outside consultancy for Chrysler. Not that any of his efforts were ever translated into three-dimensional reality. Teague would later reflect in Road & Track magazine: "It was the worst 18 months of my life."

Fortunately, better things were to come: on September 3, 1959, Teague accepted the position of assistant director of styling at American Motors – and momentarily almost wished he hadn’t. The Wisconsin brand’s output suffered from a dreary image, something that came home to roost when Teague’s youngest son demanded he be dropped off a couple of blocks from school as he was mortified at the prospect of being seen in his father’s Rambler company car. Teague would alter that perception, being named styling director within three years and vice president of AMC after five (a position he would hold for 23 years – an industry record).

His first major project was the ill-starred Tarpon, a medium-sized coupe that would have conceivably matched Ford’s forthcoming Mustang for pace and style – had it been given the green light. AMC president Roy Abernethy didn’t believe there was a large enough market for such a car, so he nixed it. In its place, he requested that its styling cues be transposed onto an altogether larger car. The resultant Marlin was a sales dud. There then followed the original 1966 AMX show-stopper that went from rendering to finished article in just 60 days.

But that was but a mere appetizer. Teague, backed up by newly appointed chairman Robert Evans, finally managed to persuade the suits that AMC needed a "pony car" of its own. Or rather two. Remarkably, AMC managed to launch the Javelin and AMX within six months of one another in 1967-’68 – the latter model being in effect a Javelin truncated by 12 inches.

Around 55,000 Javelins were shifted in its first year alone. Throw in competition success in Trans-Am for the Pennsylvania-based Penske squad (manufacturers’ titles in 1971-’72), and positive ink in the motoring press, and the more conservative board members were soon sated.

All of which served Evans and Teague with a platform to push forward with ever more radical projects as they strove to attract a more youthful audience. Buoyed by the affirmative response to the non-running AMX II supercar at the ’69 Chicago Auto Show, AMC sought to fend off the proposed Ford-sponsored De Tomaso Pantera with its own mid-engined rival – the AMX III. Mercurial Italian engineer Giotto Bizzarrini was engaged to design the car’s semi-monocoque frame and all-round independent suspension; AMC’s familiar 390-ci bent-eight engine would sit amidships. 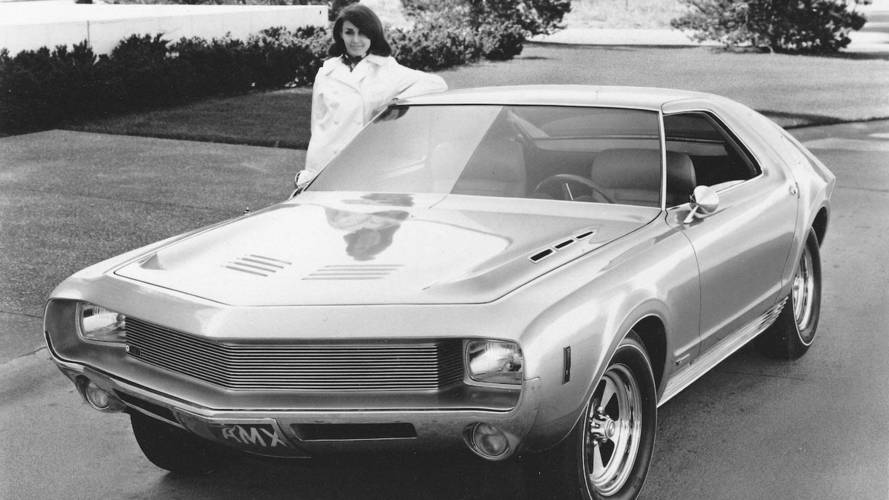 Teague produced a dramatic outline that matched the very best Latin exotica for visual drama; one that was rapturously received on being unveiled to a select audience in Rome in March 1970. The AMX III was beautiful, dramatic and powerful, but it never stood a chance. Build costs would have proven untenable, so the project was canned. Rarely one for ruing missed opportunities, Teague was nonetheless devastated – but he did at least get to keep one of the six prototypes.

Yet if a supercar was cost prohibitive, it wasn’t as if Teague had been gifted much of an operating budget for more mainstream offerings. Even so, he seemed to be blessed with an innate ability to get the most out of a dollar by using interchangeable inner doors, glass and other parts between models. Pragmatism was key: witness the much-maligned Gremlin, AMC’s attempt at breaking into the sub-compact market.

Tinder-dry coffers ensured there was no hope of creating a new car from the ground up. Instead, Teague took the existing Hornet platform and shortened the wheelbase, reputedly doodling the car’s outline on the back of a sick bag during a return flight from Detroit. With its long nose and cropped tail, its styling was different enough for Car and Driver to comment: "It borrows from no one."

And while the Gremlin would be critically mauled (it didn’t help that it was launched on April 1, 1970…), some 670,000 or so were shifted over eight years, making for a tidy profit from a $5 million development outlay. It represented a miracle of subsistence engineering and design nous.

However, it was the car that followed which cemented Teague’s reputation as a lateral thinker. Asked to conceive what was effectively a sub-sub-compact, he envisioned the Pacer in 1971 during a heated conference with shareholders as his various proposals were shot down. It was originally intended to be a lightweight economy car, but the production reality was entirely different.

Teague wanted lightweight materials, front-wheel drive and Wankel rotary power. Instead, he was obliged to use the existing 88-hp inline-six (and later V8) in what he himself described as a "football on wheels." The Pacer, outwardly at least, was as radical as cars got in period.

Not that everyone liked radical, mind. Despite numerous plusses (a drag coefficient of just 0.32 Cd being one of them), the Pacer took a hammering in the media. But still it sold. Some 280,000 or so were made from 1975-’80. Once again Teague had produced a successful product despite being handicapped with an infinitesimal development budget.

But as the 1980s dawned, he found himself becoming increasingly disaffected. Attempts at persuading a sceptical board that his mini-van concept was a winner proved futile, and Chrysler was left to make hay alone.

One design that did fly was the Jeep Cherokee that stayed in production through to 1991 (latterly under Chrysler), but with escalating influence from France following Renault’s 1980 buy-in, Teague realized his time had passed. Gluing new badges on to La Régie’s output (et voila, the Renault 9 becomes the AMC Alliance…) wasn’t his bag so, in 1984, he walked away. One last freelance gig for paint manufacturer PPG – the bizarre Alpine A310-based Wedge concept car – preceded retirement.

More so than most of his design contemporaries, Teague was, first and foremost, a car enthusiast. He owned more than 300 automobiles, his downtime being spent wielding spanners or surfing swap meets. Taking to Automobile Quarterly in 1991, he admitted: "I finally have a collection of classics from 1902 to the AMX III that reflect the great eras of the automobile."

Teague died in May of that year following a protracted and debilitating illness. Apparently an affable and charming man, he would often dismiss his career as being one long lucky streak and was prone to playing down his achievements. "I should’ve worked harder, but mom always said: 'Better to be a has-been than a never was.'" Such humility sold him short.

5 Photos
By: Richard Heseltine
Published by: Angel Sergeev
++
++
Got a tip for us? Email: tips@motor1.com