Do You Love Your Car Enough To Be Buried In It? 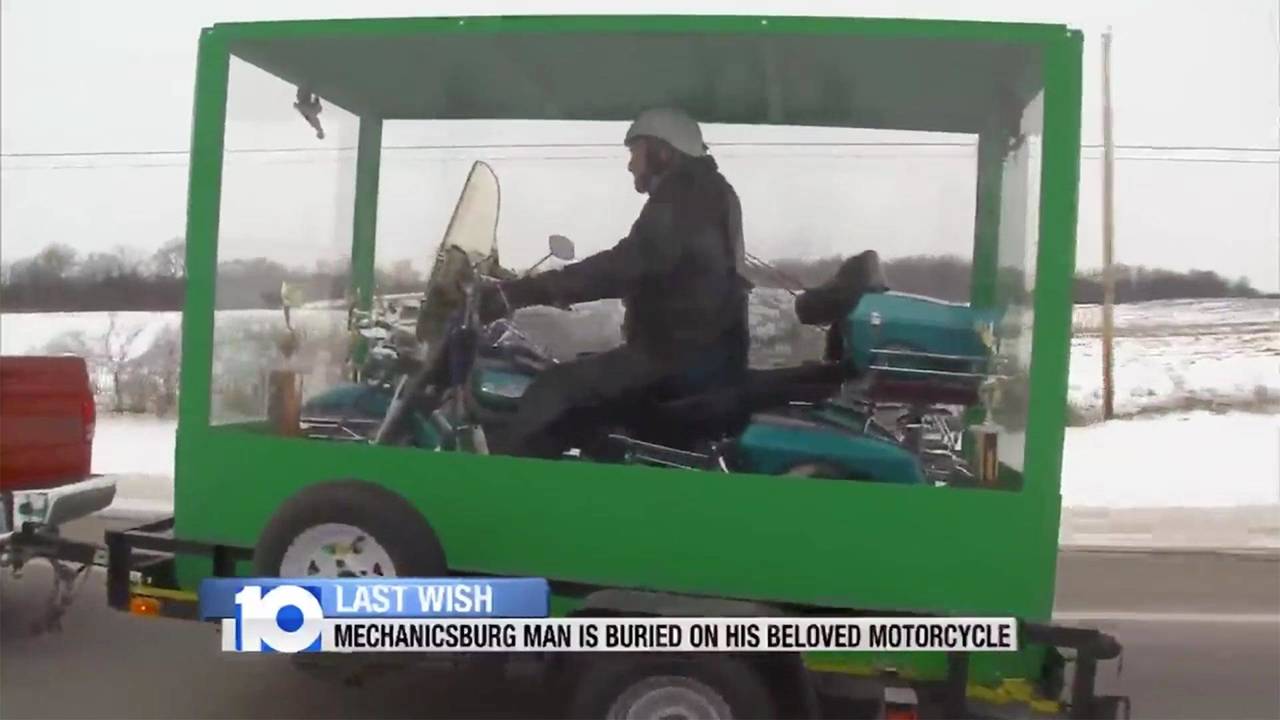 You can't take your car with you into the afterlife, but it's possible to spend the rest of eternity behind the wheel.

You might think you love your car, but is the connection deep enough to expend the time, money, and energy to be buried in it? A surprising number people have enough passion for their vehicle to find this immense effort worthwhile. Whether you have a connection with a Ferrari or a nondescript hatchback in China, these clips show that ride can be your final resting place.

Buried Astride a 1967 Harley-Davidson

The most impressive vehicular burial in recent memory belongs to Billie Standley in Mechanicsburg, Ohio. It's not in a car but on a motorcycle. He was so serious about going to the grave on his 1967 Harley that Standley's family worked while Billie was still alive to figure out how it could be done, according to the Dayton Daily News. The final undertaking required a modified cement septic tank and three burial plots, but Standley got to take a final ride by arriving to the cemetery on his bike while a truck towed them along.

Lonnie Holloway went out in style. He was buried behind the wheel in his prize green 1973 Pontiac Catalina. That's not all, though. In the passenger seat of the big coupe, Holloway packed his collection of guns. As one funeral attendee responded to the old adage that you can't take it with you: "You may not take it all the way, you can take it a little ways on the road." Makes sense to us.

In a Ferrari While Wearing a Négligé

Being buried in a Pontiac is one thing, but Sandra West outdoes them all by spending the rest of her days in a valuable, vintage Ferrari. For ultimate comfort, she's in a lace négligé, too.

West was a Hollywood socialite and former wife of a multimillionaire Texas oil baron. According to the book Strange but True Tales of Car Collecting, West wrecked her Ferrari 250 GTE in 1977, and her injuries subsequently caused her to die in an overdose of prescription pain pills. West's will specified for her burial in one of her Ferraris. There's some debate about which of her cars is in the grave, but experts, including Ferrari Chat and the Ferrari 330 GT Registry, maintain that it is West's 330 America.

The guy above visits West's final resting place and shows some vintage photographs of her burial in a large, concrete cube.

In a Hatchback in China

Being buried in your car isn't limited just to America. This video from China's Shanxi province shows an impressive undertaking of interring a man in his hatchback. Rather than simply digging a hole for the vehicle, a team of people work together to haul it into an underground crypt. While the backstory to this event is hazy, the immense effort to get the car to its final resting place shows how the people there feel about the owner.

Posed on Motorcycle at the Funeral

While not buried on his motorcycle, this man in Puerto Rico sat on his bike during the viewing. He died in a shooting, and the bike was important enough for the family to position him on it prior to the burial.

Willie "the Wimp" Stokes wasn't technically buried in his car, but he did go to his final resting place in a custom coffin shaped like a Cadillac Seville. Stokes was a gambler and reputed gangster who was killed in Chicago, Illinois, in 1984. His casket featured a Caddy grille, lights, tiny windshield, and even fake wheels with whitewall tires. Propped behind the wheel, Stokes wore a massive diamond and held $100 bills. Jet magazine even covered the funeral, including taking photos of the odd coffin.

Bill Carter and Ruth Ellsworth composed a song about the unique funeral, and Carter recorded it in 1985. Stevie Ray Vaughn later covered the song, which you can hear above.

Unfortunately, many people buried in a car haven't received the extensive press coverage like the folks above. These more obscure stories are often fascinating, though.

For example, Rose Martin bought a white Chevrolet Corvair in 1962, and she kept the famously maligned model for entire life, according to Corvair Corsa. When Martin passed in 1998, she took the Corvair to the grave, too. A local mechanic removed the rear window and engine, and Martin's casket slid into the car. There's no concern about this Corvair being unsafe at any speed anymore.

George Swanson loved his white 1984 Chevrolet Corvette, and his last words to his wife in 1994 were allegedly, "Don't forget to bury me in my Corvette," according to the The Washington Post. After his cremation, Swanson's ashes were ready to go into the 'Vette, and then the problems started. An Associated Press story reported cemetery officials "delayed his burial because they were worried about vandalism and did not want to offend other clients." Weeks of negotiations happened before Swanson and his 'Vette eventually went to their final resting place.