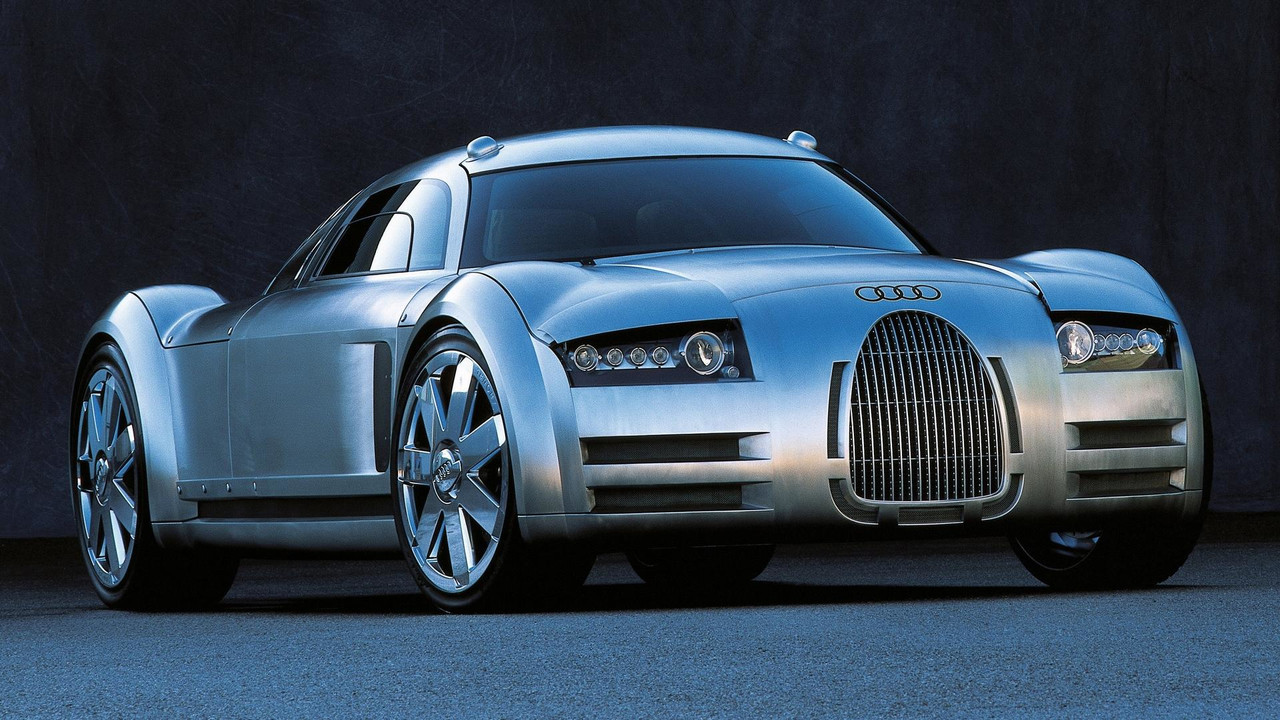 The Audi Veyron that never was. That's why it looks so sad.

Debuted: June 1, 2000 at the Autostadt in Wolfsburg, Germany

From its peculiar retro-futuristic design and Veyron engine, there’s a lot to remember about what looks like a first-generation TT on a heavy dose of steroids.

Named after the legendary race car driver Bernd Rosemeyer, the concept saw the light of day a year after the Bentley Hunaudières with which it shared the monstrous W16 8.0-liter naturally aspirated engine. Bugatti slapped on four turbochargers for the 2001 Veyron concept before putting it into production from 2005 until 2015. A heavily upgraded version of the engine still exists today in the new Chiron.

Engine aside, the concept was Audi’s way of paying tribute to the iconic Auto Union “Silver Arrow” race cars of the 1930s made famous by Bernd Rosemeyer. He unfortunately perished at the young age of just 28 in an Auto Union Streamliner on January 28, 1938 behind the wheel of an Auto Union Streamline. It happened during a top speed record-breaking attempt while doing around 273 mph (440 kph) on the Frankfurt to Darmstadt autobahn.

You can see the source of inspiration in the design by looking at the gorgeous race cars from the Silver Arrow era combined with styling cues from the original TT pinned by Peter Schreyer, which is still the coolest TT to date. Since Audi wanted to make the Rosemeyer as aerodynamic as possible, it decided to replace conventional side mirrors with a pair of cameras.

As far as the interior is concerned, all eyes are on that lovely open-gated six-speed manual gearbox in charge of delivering the immense power to both axles. The minimalist cabin with polished aluminum surfaces was a nod to the stripped-out interiors of race cars with more dials than buttons. It also featured adjustable pedals and a pair of body-hugging bucket seats wrapped around in fire-resistant upholstery.

The four-ring company never had any intentions of putting the Rosemeyer into production. As a matter of fact, the concept was not even functional. It even said so in the press release back in 2000:

“Audi’s design study at the Autostadt in Wolfsburg is not a prototype ready to be driven, nor has it been created in anticipation of a production vehicle.”

Only time will tell whether Audi will have something above the R8. The company has admitted it’s toying around with the idea of doing a limited-run hypercar, but it hasn’t received the stamp of approval just yet. These days, RS SUVs are more important than anything for Audi Sport...