The Kings Of SEMA And One Bad-Ass Bronco: Podcast #28 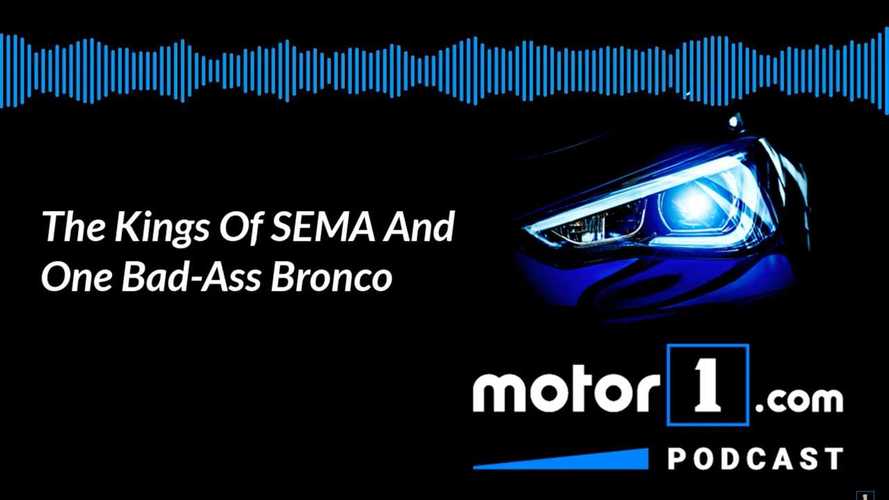 This year's SEMA Show saw some amazing cars debut, including a sneak peek of the Ford Bronco's return.

This year's SEMA Show in Las Vegas was one for the books, and Motor1.com Editor and Video Producer Clint Simone joins this week's podcast to tell us all about it. Simone is a SEMA veteran and knows the show like most people never will, so he's the perfect guide. Joining him is regular show host John Neff and Senior Editor Greg Fink.

Of the many hundreds, if not thousands, of cars at SEMA this year, only a few captured our attention and wouldn't let go. Ford's debut of the all-electric Mustang Lithium was a total shocker (pardon the pun), while Speedkore had jaws dropping on the floor again this year with a carbon fiber-bodied Dodge Charger Widebody that was twin-turbocharged to produce 1,525 horsepower and converted to all-wheel drive. Then there were the Supras – so many Supras.

Before SEMA began, though, Ford took us out into the desert around Las Vegas to show us the Bronco R, a Baja-bred racing version of the upcoming 2020 Bronco reboot that will compete in the Baja 1000. The Bronco R's body gives us many visual clues for what to expect from the production version, and we even got to go for a ride as passengers (check out the video here).

You Can't Listen To Just One:

How The Koreans Are Killing It With Design: Podcast #27

What's Up With Americans And Hatchbacks? Podcast #26

After sharing a few reader comments, our hosts ended the show with our favorite segment, What We're Driving This Week. Fink spent a week as a family man behind the wheel of the latest Toyota Sienna minivan, while Clint took the refreshed Honda Civic Si for some memorable laps around Circuit of the Americas in Austin, Texas. Neff, meanwhile, got a new car that represents a big life change: a 2016 Chevy Spark EV. You'll have to listen to find out more.