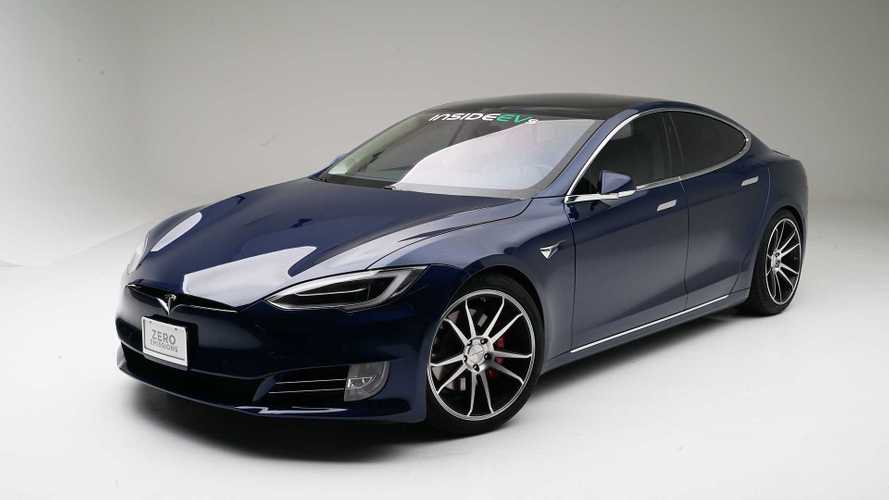 There’s little the Tesla Model S P100D wants for. After all, it’s insanely quick, exceedingly comfortable, and capable of traveling more than 300 miles on a full charge right out of the box. Which might explain why Dream Giveaway chose to modify this Deep Blue Metallic Model S P100D very conservatively.

On behalf of the non-profit New Beginning Children’s Homes, Dream Giveaway added little more than some aftermarket wheels and a handful of suspension enhancements to the electric luxury sedan. It’s not a lot, but it’s enough to make the car look and feel just a little more special than your typical Model S. If you’re itching to win it, click here and get double tickets.

The 10-spoke wheels are a particularly attractive touch and give this Tesla a unique and handsome look that helps separate it from the herd of Model S sedans currently overrunning local shopping mall parking lots. The wheels come wrapped in a set of Continental tires, too. The sticky rubber and suspension upgrades help this P100D handle just a little bit better than the stock model. Turn-in is a smidge sharper and body motions are better controlled. Of course, we’re talking incremental improvements here, as the stock Model S already leans very little in turns thanks to its low center of gravity that comes courtesy of its floor-mounted battery pack.

Boot the accelerator pedal and this P100D pushes forward with the brutality of a rocket ship leaving the launch pad.

Boot the accelerator pedal and this P100D pushes forward with the brutality of a rocket ship leaving the launch pad. With more than 500 horsepower pushing the sedan forward by way of two electric motors (one at each axle), the P100D feels ferociously quick. Tesla states the car can make its way to 60 mph in a mere 2.5 seconds – we don’t doubt that.

Be gentle with the accelerator, though, and the Model S behaves like the luxury sedan it is. Quiet and comfortable, this high-performance electric sedan includes cushy seating for five, fetching cream upholstery, and a giant 17.0-inch infotainment display that offers high-quality graphics, logical menus, and quick responses to user inputs.

Despite its mind-blowing performance, the P100D is a frugal thing. Its large 100-kilowatt-hour battery pack and general efficiency allow this luxury sedan to travel an EPA-rated 315 miles on a full charge. And thanks to Tesla’s near-nationwide Supercharger quick-charging network, topping off the P100D’s battery pack is a quick and simple affair should you decide to push the sedan’s range to its limits. To make at-home charging a cinch, Dream Giveaway includes a Tesla home charger to the winner of this Tesla.

This Tesla is everything you need, and more, and it can be yours for as little $3. That’s right, one $3 sweepstakes ticket can get you behind the wheel of this $100,000-plus electric supersedan. You can make a tax-deductible donation at DreamGiveaway.com, benefitting sweepstakes sponsor New Beginnings Children’s Homes, which provides unrestricted grants to Mothers Against Drunk Driving, the National Guard Education Fund, and more.

While every ticket holder will have the satisfaction of donating to a charitable cause and a tax-deductible donation to boot, one lucky person will also enjoy the pride of calling this 2018 Tesla Model S P100D their own. Additionally, Dream Giveaway will fly the winner down to Clearwater, Florida, to pick up the car and cover $35,000 worth of taxes on the vehicle. But you can’t win if you don’t enter so get on over to DreamGiveaway.com.