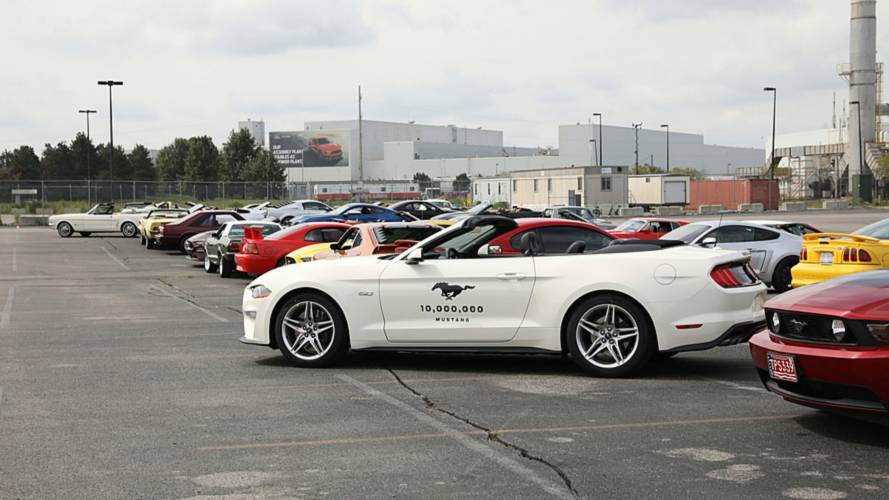 We get the lowdown on how the Blue Oval counts its cars.

Ford recently celebrated a milestone, and unless you’re living under a rock on one of Saturn’s moons, you probably heard about it. The 10 millionth Ford Mustang was recently built, rolling off the Flat Rock, Michigan assembly line to a parade of its siblings ready to celebrate the occasion, its special Wimbledon White finish paying homage to the very first Mustang sold in 1964.

There’s no doubting that Ford has built many millions of Mustangs in 54 years, but is this car really number 10 million? Like, exactly the 10 millionth Mustang ever made? For that matter, how does Ford determine production numbers in general? Are pre-production cars and prototypes tossed into the mix?

We reached out to Ford on the matter for a bit of clarification. The company actually offers official certificates of authenticity for certain specialty vehicles through the Ford Performance Group, which can include production information broken down by body style (coupes or convertibles), colors, and in some cases even option packages. Tabulating those numbers, however, isn’t an easy task.

“The factory looks at it from a commodity standpoint,” said John Clor, communications manager for the Ford Performance Group. “It takes a certain amount of components like axles and bodies to build a finished unit, and all those units count towards the factory production. There might be a hundred units built, but if eight are sent out for crash testing, technically they wouldn’t count towards final production numbers in Ford’s eye because they were never titled. Those units were consumed by Ford.”

In other words, Ford factories monitor total unit construction, but only saleable vehicles count toward the final production sequence.

However, sometimes it can take a long time – possibly up to a year – to have a definitive final count. That’s because some pre-production cars might later be certified as saleable vehicles, either through a refit of production parts or other circumstances. Also, this is the process used on specialty vehicles like the Mustang Shelby GT350, not necessarily mainstream Mustang production.

With the 10 millionth Mustang having recently rolled off the line, does this mean its production number could change if a pre-production unit built earlier is upfitted and sent to a dealer as a saleable unit?

In short, the answer is no.

“Prototypes and pre-production vehicles like that aren’t part of the figures,” said Erich Merkle, head of U.S. sales analysis for Ford. “We also don’t count pre-production cars that might go back for a refit. It’s really just the saleable vehicles that are included in the production total.”

“Prototypes and pre-production vehicles like that aren’t part of the figures,” said Erich Merkle, head of U.S. sales analysis for Ford. “We also don’t count pre-production cars that might go back for a refit. It’s really just the saleable vehicles that are included in the production total.”

Technically speaking, that means more than 10 million Ford Mustangs have been built over the last 54 years once all the various test cars and workhorses are included. Exactly how many more is anyone’s guess; there’s virtually no documentation of these behind-the-scenes vehicles, and the vast majority are dismantled or destroyed anyway. That might be upsetting to some, but this is pretty much how any production run of an item is tabulated – be it limited-edition collector coins, numbered prints of a special painting, or that ultimate-edition set of Star Wars dinner plates you’ve always wanted.

From a saleable production standpoint, then, Ford’s process of tracking specific production numbers seems well and truly dialed in. If the powers-that-be say this Wimbledon White GT convertible is the 10 millionth production Mustang, we absolutely believe them.