How It Feels To Drive The Iconic BMW 507 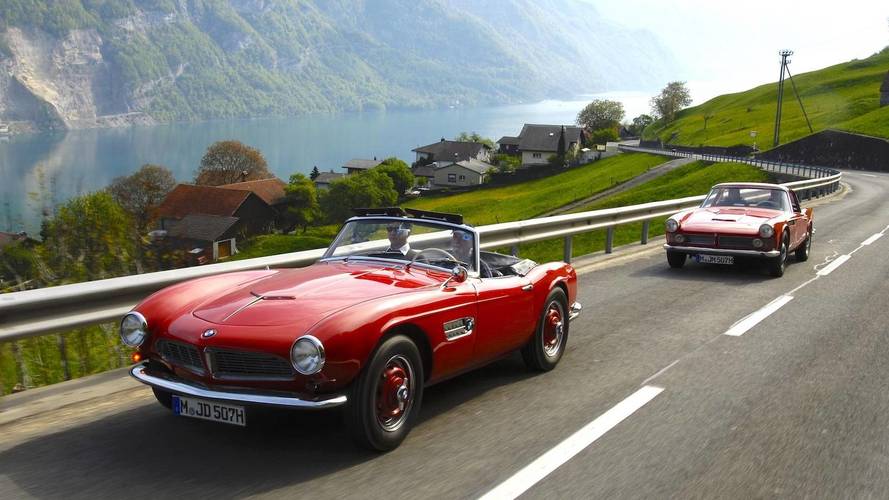 By: AutoClassics.com
Published by: Adrian Padeanu

Is the 507 as good as its reputation suggests? And how does it compare with the one-off 3200 Michelotti Vignale version of the 507? The answers may surprise you...

Most people today connect the iconic BMW 507 with Elvis Presley, who owned one, and with some unspecified golden age in the history of the Munich-based brand. In fact this beautiful car was a commercial disaster, and that period in the history of BMW was one burdened by doom and gloom...

During World War 2, BMW was unable to build cars but it did develop arguably the best radial engine of World War II, the BMW 801 of Focke-Wulf Fw-190 fame; it also worked on jet engines and managed to start the production of one, the 003, before hostilities ended. BMW also produced its excellent motorbikes for military use, and that was that.

Right after the war, BMW almost ceased to exist. Its main car building facility in Eisenach found itself under Soviet occupation and, using the undamaged tooling and stock of parts, began to turn out brand new cars like the 327. After a while, the BMW name was changed to EMW so as not to cause further conflict with the West.

The Munich facility, which had made aircraft engines, had been reduced to rubble and very little could be salvaged. Anyway, the American occupying forces did not permit BMW to restart vehicle production. Nevertheless, the BMW management persevered, and kept begging the Americans for permission. In 1948, the production of the R24 motorcycle commenced. BMW was back in the game.

It was alive, but only just, and had no car to build. One of the managers tried talking to Ford and Simca to produce their vehicles under license, but the talks got nowhere. Germany was poor and BMW's chief engineer, Alfred Böning, believed a cheap car was the answer: the motorcycle engine-powered 331 looked like a scaled-down pre-war BMW model, but the board did not approve it for production.

It was vetoed by the former banker and Opel plant manager, Herr Grewenig, who believed, correctly, that for a while BMW would not possess a large enough factory to efficiently produce a cheap car while making money on it, and he pushed for the creation of luxury automobiles that could be made in small numbers and with a more sizeable profit margin. He won in the end, and he had Böning design the BMW 501.

This car, powered by a six-cylinder engine, a development of a pre-war design, was delayed, too heavy, underpowered, and cost as much as an average German earned in four years – not exactly a recipe for commercial success. The bodies were built at subcontractor Baur in Stuttgart because of delays to in-house facilities, thus adding to the cost.

The 501 was updated after a while, and in 1954 a parallel model was introduced, the 502, with a new, 2.6-liter V8 engine, designed by Böning and Fiedler (the same Fiedler who was instrumental in the creation of the 328 before the war, and who earlier had gone away to work for Bristol Cars in England).

Sales of the 501 and 502 were finally healthy, but insufficient for the company to develop. The next stage of BMW's history involves Max Hoffman, the former Austrian Rolls-Royce and Bentley dealer who sold cars on the East Coast of the United States, so important in the history of Mercedes and Porsche.

In those days, influential car importers could actually have a say in what car makers built, especially those like Max Hoffman and Luigi Chinetti, men with a strong track record in sales.

Max Hoffman, buoyed by the success he generated with the 300SL Gullwing and the 190SL Mercedes, suggested that BMW take advantage of the new trend for fashionable sports cars and produce a coupe based on the 502. He felt sure that if it cost $5,000 or below, he could easily shift thousands in the US.

BMW decided to take the plunge, but the 503 coupe proposal, a four-seater using a lot of 502 carryover parts, was deemed by Hoffman not to be radical enough. He did not like what the factory was working on, so he suggested that his friend, Albrecht Graf von Goertz, a disciple of Raymond Loewy, submit his refreshingly different design.

His work was approved for production as the 507, and both the 507 and 503 were introduced to the public in the same year 1955, the 507 in New York, and the conservative 503 in Frankfurt. Unfortunately for the beautiful 507, the expected U.S. sales never materialized, as Hoffman, having learned the car cost twice as much as the initial estimate, more than the 300SL, withdrew his huge order.

BMW produced only 252 (or 253, depending on who you ask) 507 roadsters between 1956 and 1959, and even such owners as Elvis Presley (whose car surfaced recently) and John Surtees would not persuade the buyers to part with their money.

The car was practically hand-made, hence very expensive, its 3.2-liter V8 engine developed only 150 horsepower, and its performance was inferior to that of British cars imported to the US. At the same time, the demand for motorcycles, the staple of BMW income, tumbled, and the 500-series of sedans were no longer selling in numbers which would guarantee profit. 1959 was a year of huge losses, and of despair.

Today, the BMW 507 is no longer associated with the worst year in the company's post war history. The 507, whose styling elements surfaced on the Z3 and the Z8, is now a fantastic investment, with some reaching $2 million at auction. If you have one in your garage, it can only grow in value. If you don't, it's unlikely you will get a chance to try one, so let's talk about how it drives.

For starters, it is really beautiful in the flesh. In 1956, the 507 must have been stunning, unless it was parked next to a Gullwing. The proportions are ideal, the surfacing superb, and the details timelessly elegant. The engine starts well enough when cold (totally different when very hot) and the gearbox action instills confidence. There is no American-style V8 burble, just a technical, clean, Germanic engine note which never becomes intrusive.

So far, so good. It doesn't accelerate as well as one may expect, getting to 60 mph (96 kph) in about 12 seconds from standstill, and its top speed is around 120 mph (200 kph). Steering is heavy and vague, and while the car can be hustled along a mountain road, it requires skill and doesn't flatter the driver. At least the suspension is supple and soaks up bumps well.

As a cruiser, a boulevardier, it is quite credible but less so as a driver’s car. Yes, I know Hans Stuck (below) raced one and won his class at a hillclimb in 1958, but Hans Stuck had won hillclimbs in the deadly V16 Auto Unions, and he could drive anything with wheels on it faster than anyone else.

The wooden brakes (all but the last few cars had four Alfin drum brakes) need a proper shove to decelerate the car, and at speed the chassis feels average for the period. Granted, it's safer for an inexperienced wheelman than a Gullwing, but also because the Mercedes arrives at corners more quickly plus it overwhelms the senses with the abundance of stimuli.

The BMW 507 was so perfectly resolved in terms of design that only two stylists attempted to improve on the Graf's work. One was Raymond Loewy, in 1957, but his creation was so ugly it is but a curious footnote in the history of the iconic car.

But there was another designer who tried it, and his work makes much more sense. Giovanni Michelotti, so well known in Britain for his work on various Triumphs, from the Herald to the Stag, was a prolific designer who always sought ways to entice new customers.

Hoping to win a new contract with BMW (he was already consulting on the BMW 700), Michelotti started sketching a more modern skin for the BMW 507 chassis in 1957. He bought a chassis via the Italian BMW importer, Alessandro Paolini of Casa dell’ Automobili, in 1958, and contracted the body panel work to Scaglietti in Modena, the builder of so many fantastic Ferrari bodies. The assembly was done at the workshop of Alfredo Vignale in Turin.

This prototype, acquired by BMW in 2006 after a complicated life, is now called "3200 Michelotti Vignale," and was originally presented publicly in Turin in 1959. Unfortunately for both BMW and Michelotti, the talented Italian was unable to persuade BMW to continue the production of the 507 with an updated body, built in Italy at lower cost.

The car looks a bit like a Maserati, and has a completely different air to that of a standard Von Goertz 507. It also has electric window lifters and a cockpit more cramped than the regular one.

Having driven both a normal 507 and the Michelotti prototype over the same roads, the latter proved more stimulating, perhaps due to its unique nature and complicated provenance. It is in fact heavier, probably due to its prototype nature and the abundant use of lead filler by Vignale's craftsmen.

Still, due to a different, less relaxed driving position and a different windshield vista, the placement of the car in corners seems curiously easier, and more tempting to push harder. A different exhaust note, much harsher and louder, also lends the car a different flavor. A redesigned dashboard looks right. Better than the standard car? In terms of appearance, no, but in terms of rarity and history, we have to give it the nod.