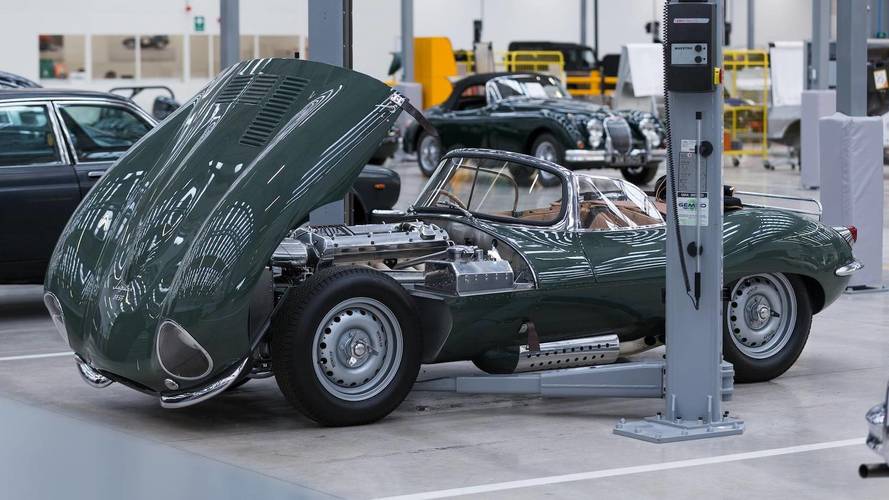 It's packed with classics in every state of repair, and there are surprises around every corner – even the 007 Spectre cars. Welcome to the Classic Works tour.

Big manufacturers are homing in on their heritage more than ever before, not just because a strong history boosts the brand but because it has become big business in itself. Jaguar Land Rover has always had a collection of classics, once crammed into the reception at the Browns Lane factory and various sites around Coventry, but it moved into a whole new league when it opened its new Classic Works in June 2017.

The new building is on the Prologis Park in Ryton, on the outskirts of Coventry, the site of the old Rootes, later Peugeot, factory. It's also a few doors down from Jaguar Land Rover’s equally plush Special Vehicle Operations HQ. It’s open to the public on a pre-booked basis, with three-hour Works Tours for £49 ($68) or £39 ($54) for children.

Seeing as it’s been a while since the Works building opened, we thought we’d revisit to see how it’s worked out, and what’s going on in the workshops.

The front section of the building, occupying roughly a sixth of the 14,000 square meters (150,700 square feet) overall, is dedicated to a stunning showroom and customer area. To one side are the "Reborn" Land Rovers, with both patinated and fully-restored examples on show, to help customers choose which they’d go for. It’s not an easy choice – lovely as the shiny ones are, the patinated Series Ones have a spine-tingling appeal.

At the other end, in front of the Classic Works offices, are a couple of Jaguar XK8s, both for sale. Scattered around the rest of the reception are various greats from Jaguar history – expect to see race cars, XKs, E-types, even XJ220s.

The best bit, though, is the workshop, viewable from the reception through glass walls and sliding doors. There are 54 individual workshop bays and stripdown areas, plus a dedicated engine shop. It's an impressive sight.

As you walk in now, the first section you see is the continuation car area, currently XKSS but shortly to move over to the D-types; the last three XKSS continuations will be completed alongside the first of the D-types.

Moving around the outer edges of the workshop, the next stop is the XJ220 area. On our visit, there were no fewer than five 220s undergoing work, some in for servicing, some much more involved – Classics Works have already been carrying out restorations on XJ220s.

There are a couple of XJ Coupés hanging around here, awaiting attention, which is a fine reminder of the increasing desirability of these models, and then a line-up of Range Rover Classics, in for "Reborn" rebuilds, from chassis-up. It’s a clear reminder of the success of the Land Rover Reborn program.

In the next row of bays, there are yet more Series Land Rovers, and a long line of much newer Defenders, all awaiting the V8 Works conversion. There will be 150 of these built, again from chassis-up, replacing brakes, suspension and all running gear, refurbishing chassis and bodywork, and retrimming the cabins. It’s reckoned well over half sold out within a day of them being announced.

Further over there are the Jaguars, every type, some in for a service and others undergoing major surgery. Nestled in among these is the prototype E-type Zero, the electric conversion that Jaguar unveiled in September 2017.

Ironically, it’s not so far away from the engine shop, impressively clean. In fact, it’s only in one far corner of the workshop that the white floors are hidden under your typical rusty vehicle parts. This is where Series One Reborn parts are being stockpiled, and there’s every chance of seeing Michael Bishop, the brains behind the Reborn project and an inveterate Land Rover enthusiast, rummaging happily through the bits.

Next to the pile of parts is the doorway through to the storage section, almost as big as the workshop and packed with cars – well over 500 of them, in double-decker storage. There’s everything in here, from Series Ones and Range Rover Classics awaiting Reborn treatment, to rare models kept for posterity.

Then there’s still a portion of the massive James Hull collection bought by Jaguar in 2014, several classic Jaguars still in Mille Miglia logos from previous years, a couple of 007 Spectre film cars and even a D-type replica that is now tucked away, given that Jaguar Classic has just introduced the new D-type continuation cars.

A group of visitors is being guided around the cars here, the participants poring over the many artifacts. It’s as good as a proper car museum in here in many ways, and there’s an excitement to squeezing between the cars to work out what it is you’d spied from afar.

It’s time for our visit to come to an end, though not before some time reunited with the continuation car team, in the closed-off area at the back of the workshop, to see the prototype D-type continuation receiving finishing touches.

It seems that Classic Works is thriving, and the improvement for all involved is clear, especially when you consider that Jaguar Land Rover's heritage operations had previously been spread across 14 different sites (and it all came together here without any job losses). We exit via the gift shop, of course, looking forward to the next visit.