How A Soaking Wet Nürburgring Kept Subaru From Making History 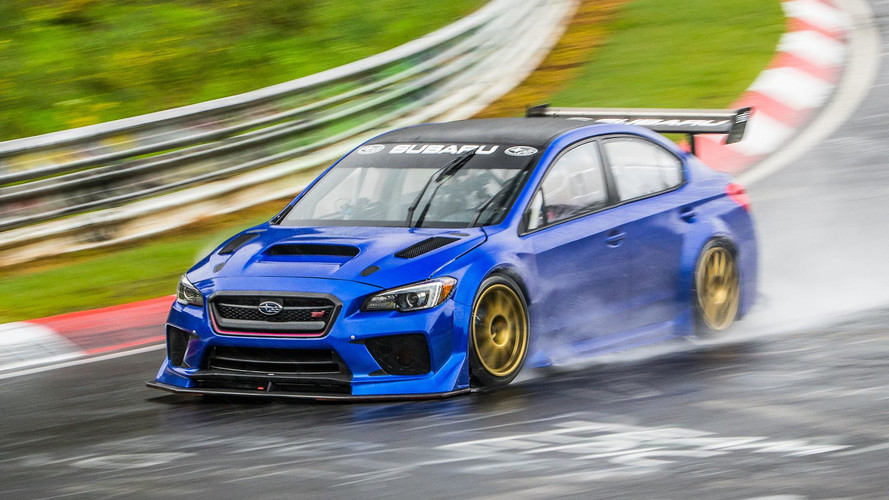 The goal: Run the Nordschleife in under seven minutes. The problem: Mother Nature.

Subaru communications director Michael McHale says this with confidence, rain dripping off his coat and splashing onto the door sill of the WRX STI I’m sitting inside. I’ve just completed three terrifying laps around the soaking wet Nürburgring, and while I’m beaming with excitement (I didn’t die!), the Subaru team is pretty bummed. They’re here to attempt a sub-seven-minute lap, to have a specially prepped race car become the quickest four-door around the Nordschleife. But that’s not happening. Everything – including the race team’s ambitions – is soaked.

Subaru came to attempt a sub-seven-minute lap, to have a specially prepped race car become the quickest four-door around the Nordschleife.

The car in question is called STI Type RA, for “Record Attempt.” It started as a showroom-ready 2017 WRX STI, and then the folks at racing company Prodrive took control, turning it into the monster track-stormer you see here. It might not look the same, but this very car is the one that broke the Isle of Man lap record last year with pro driver Mark Higgins behind the wheel. Updated and upgraded, this car’s new task is to pull off an outrageously quick lap around one of the world’s most challenging courses. No sweat, right?

The modifications are substantial. Yes, that’s Subaru’s turbocharged, 2.0-liter boxer engine under the hood (from the WRX, since the STI uses a 2.5), but it’s heavily massaged and boosted, putting out roughly 600 horsepower. The Prodrive team says it’ll rev up to 8,500 rpm, though one engineer admits “we’ve run it to nine” before. Prodrive adds its own sequential gearbox, with shifts that take between 20 and 25 milliseconds to execute. That’s far quicker than your average dual-clutch gearbox, and way quicker than any human’s reflexes. The only part of the powertrain that carries over unchanged is the STI’s trick active center differential, which moves power fluidly between all four wheels.

At the ground level, the suspension is full rally-car spec, with heavily upgraded springs, dampers, links, and struts. The brakes are massive – 15-inch vented discs with eight-piston calipers at all four corners. Subaru’s iconic gold wheels are fitted with nine-inch-wide racing slicks, and the wheels have an 0.6-degree increase in negative camber compared to when this car ran the Isle of Man. All this means better stability and traction for running a course as challenging as the Nürburgring.

Oh, and one super cool detail: That massive rear wing is electronically adjustable. There’s a button on the steering wheel that flips the top part of the wing up or down, depending on how much downforce is needed. It happens with a loud, hydraulic “chunk,” immediately followed by a collective “woah!” from the assembled onlookers.

Richie Stanaway is the lad tasked with pulling off the lap record. The 25-year-old racing driver from New Zealand has competed in the 24 Hours of Le Mans, Bathurst 1000, and FIA World Endurance Championship (among other events), but this run is decidedly different. He’s optimistic, the day before the record attempt when the weather is still cooperating. But as the rain comes in, his mood, like the sky, darkens. He’ll give it his best shot, but nobody on hand is expecting a miracle.

The car starts up with a ferocious snarl and Stanaway slowly drives out to the Nordschleife’s entry point. Before I know it, he’s off, the sound diminishing in the distance. Several eerily silent minutes pass before I finally see headlights as Stanaway enters the long straightaway, pulling hard as he picks up as much speed as possible to start the timed lap. With a massive plume of water behind him (and a helicopter overhead to record the whole thing), Richie speeds past as the hot lap officially starts, the rain pouring, the cold wind biting against the faces of the assembled media and Prodrive crew. Some eight minutes later, Richie returns, no official time card printed, no lap record achieved. He’s smiling, though – thrilled from the experience. Prodrive immediately starts making tweaks and tunes to the STI, and Stanaway goes out for one more lap later that afternoon, mostly for the sake of photos and video (check it out, below) rather than an honest-to-goodness record run.

This isn’t the end of the story. The PR team, the Prodrive engineers, they’re all assuring me that they’ll be back to try again.

There’s more good news, too. The Type RA name won’t just lend itself to this race car. Subaru confirms there will be a road-going, production version of the STI that wears this nomenclature, complete with a carbon fiber roof, upgraded suspension, Recaro seats, powertrain upgrades, and, yes, a ridiculous rear wing.

For now, Subaru walks away from this record attempt with a hunger to succeed. The car is capable. The driver is, too. Get the weather to cooperate, and I'll be on the edge of my seat for Subaru’s next shot at a record. Stay tuned.