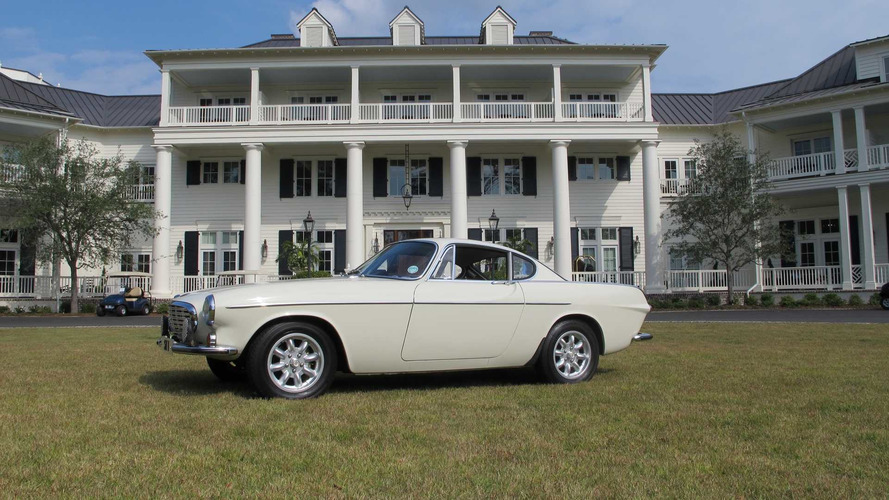 We reminisce about the time we drove the legendary actor’s classic Volvo.

I’m 50 feet away pouring another coffee when it begins: I hear the engines firing up, a clamor of revving, some humming loudly at idle. The first cars at the head of the pack begin to pull away. I fix the lid on my coffee and jet towards my ride, but just before jumping in I have to take a brief moment to gaze at this visual treasure, the Volvo P1800 –1960s-Euro-mod perfection packed into a two-seat, front-engine, rear-wheel drive looker. I mean a smoking jacket should be required just to get near this icon, to say nothing of behind the wheel. Thankfully, no such requirements exist, as we’re in sub-tropical South Carolina, the sun at full-bore, humidity lathering on a thin film of sweat if you’re standing still for more than a minute.

I jump in, hand the coffee to my co-pilot and literal cupholder, while the car immediately in front begins pulling away. I’m fiddling with my old school three-point belt, trying not to hold our convoy up. Adjusting the straps and working the mechanical latch requires more work than today’s pull-and-immediately-click-in belts, but remember, this was very advanced safety technology at the time, Volvo having invented it not ten years before, in 1959.

Volvo waived the patent rights in the interest of general safety, and now more than half a century on it’s estimated that a million lives have been saved globally as as result. One. Million. Lives. Safety isn’t always sexy, but it’s hard for the mind to grasp such a feat of this magnitude.

My co-pilot and passenger-in-chief is Russell Datz, Volvo comms man, motoring enthusiast and raconteur in his own right. While it would be nice to assume Russ is there for nice chats and atmosphere of balmy South Carolina, it’s also because the rare, thin wooden-rimmed wheel I’m gripping is the same one Roger Moore held not once, but many times over many years, London Registration number NUV 648E.

Moore’s first go with it was as Simon Templar on the 1960s British TV show The Saint, just before he would become James Bond. But he liked the car so much he actually bought it. And now, decades on, I’m the first media Volvo is allowing to drive it since they’ve acquired it. We get rolling here, only in my haste – this car is a right-hand drive, left-hand manual – I’m almost positive I’ve started us off in third. In the morning’s excitement and while I was checking out the Concours feast – Ferrari Dinos, a white E-Type, Porsche 356s with the 1500cc engines, an orange Fiat 124 Sport 1600, a red Diablo Roadster, roof – all this and I never got the chance to get acquainted with my steed for the day.

No matter, a few minutes in, belt is adjusted right, I’ve got a few rows and clutch presses and am starting to get a feel for the car’s rhythm. We’ve hand-cranked the windows down, we’re rolling thirty, forty miles an hour on our Minilite wheels before we get on the highway and can get a little speed going, but this drive is hardly about speed. It’s about the sheer pleasure of motoring, of delightful cruising, the yammer of the motor and of the breeze flying around us, gazing out and soaking in the endless palmettos and deep blue water, an island paradise this, right in the heart of the South. I’ve got the sunglasses on, even in shorts it’s warm, but a nice day for a drive. I suppose if you owned a P1800, just about any day would be.

The allure of the exterior design is in its clean, somewhat period-confused sensual aesthetic. The long and phallic front-end is sort of common for the period – think of the iconic Jag E-Etype – as is the high beltline, the slender pillars before the safety tests forced the thicker ones we have today, and those incongruous tail fins that belong to the decade prior, but somehow really work here. Two round headlights, two Hella fog lights, two singular taillights, a twin tailpipe, like hands and feet and ears and eyes, nature dictates that some things are best in pairs.

The interior is an exercise in pure elegance: Smiths instruments, touches of Gulf colors that are impossible not to adore, the speedometer the epitome of restraint and class with big numerals appearing only in 20s, topping at 120 miles per hour. Do we really need to know if we’re going exactly 23 mph, or can we be assuaged that if the needle is hovering a little above the 20, far from the 40, maybe that’s good enough and even preferable in some way? The tach shows revs up to 7,000, but there’s a hard redline at 6,500. Water and oil gauges are dead-center behind the wheel. There are no headrests, and we don’t particularly miss them. The rear-view mirror is fixed to the dash, but I can get by.

The seats are an ocean of foam, no bolstering, cosseting, you feel like you’re on the sofa in the living room, just fine. These were the very seats Moore – and a very, very long list of actresses – at least sat in during and around filming, from February 1967, until the series completion in ’69.

With its long shifter mounted straight into the floor, there’s more of a mechanical, analogue feel than today’s manuals. The notion that this rod is dictating one of four speeds seems to hit home extra. And those four speeds are plenty, the transitions aren’t harsh, the gear ratios aren’t too short, and with the constantly changing driving conditions you don’t feel as if you’re churning butter, this is driving as it was meant to be – engaging, with a light exuberance.

There are some things that technology has made better, to be fair. This 1800S – born in Sweden on November 29, 1966 – is absent power steering, for instance. On the highway and while moving, it’s easy to maneuver, change lanes, exit, turn into a corner. But in everyday situations, the tight parking lots, narrow driveways, sharp turns, and the like, it requires a fair amount of elbow grease, a bit of jostling to maneuver. We almost take that for granted today, that general ease and accuracy of today’s cars, even the poorer of the bunch do a comparatively good job.

Glancing out at the relative tranquility of the surrounds, it’s hard to imagine the wrath of a Category 5 hurricane literally reshaping the land, uprooting trees, and leaving devastation in its wake, as this area had recently seen.

Today, nothing is on the mind but the sheer pleasure of cruising along with the enthusiasts and owners that make up the Hilton Head Concours, a beautiful occasion to celebrate some of the most evocative vehicles, and Moore’s Volvo P1800 stands with the best in that department.

We’re going maybe 40 mph on a country road, the air whipping around us providing some relief from the humidity, the partial shade of the trees a small savior. An interesting quirk, there’s a mini fan behind the seats, angled towards the driver. Moore had it installed and had it running to keep himself cool – fitted in a smart suit and all – in between scenes. The fan has survived the decades, another little fun piece of history.