Should You Buy A New Car Or A Used One? 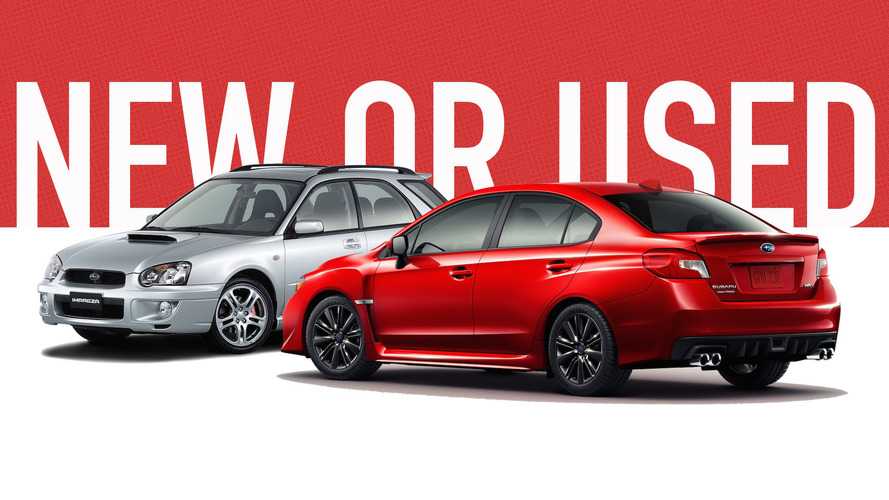 Though your decision may be based solely on financial considerations, there are plenty of pros and cons either way.

It probably wasn’t long after Henry Ford’s Model T began rolling off the assembly line that the first consumer pondered whether it was a better deal to buy a brand-new one or purchase a second-hand version for less money.

Buying a used vehicle is an act of sheer necessity for many consumers – the average pre-owned model costs around $19,000, versus well over $31,000 for a new car or truck. But even those who can afford a shiny new ride often find they can get more for their money – or perhaps save a few thousand bucks – buy shopping in the used-car market.

Fortunately, Motor1 has you covered either way, with our car shopping section able to provide both new and used-vehicle listings for your geographic area based on a wide range of price points and preferences.

In the meantime, here’s a look at the pros and cons of buying a new car or truck versus a used model:

For starters, buying or leasing a new car simply has an indelible allure for many consumers that outweighs the added up-front cost. There’s nothing like being the first person to drive a fresh new car off the dealer’s lot, without wear and tear, ungainly smells, or whatever residue that may have been left behind by a previous owner.

Except perhaps near the end of a given model year when dealers are winnowing down their inventories, new-vehicle shoppers typically have a full range of choices with regards to interior/exterior colors and equipment combinations from which to choose. Though there are far more used cars and trucks on the market at any given time than new vehicles, locating one equipped the way you want it and in the color combination you desire among locally available used models can be considerably more difficult.

A new vehicle’s retail price is set by the manufacturer, and though that figure can almost always be winnowed down by careful negotiation, this makes it reasonably easy to compare costs among different makes and models. Though used-vehicle shopping sites can provide price projections based upon past sales, the price of a pre-owned car is ultimately set by the buyer and seller, based on a wide range of variables, including its condition, mileage, and local supply and demand issues.

The price of a pre-owned car is ultimately set by the buyer and seller, based on a wide range of variables, including its condition, mileage, and local supply and demand issues.

Plus, slower-selling new cars often come with generous cash rebates that can be used to pad one’s down payment; not only does this reduce one’s out-of-pocket expenditure, it can help some consumers qualify for more favorable loan terms if their credit scores are lacking.

What’s more, new cars and trucks can generally be financed at lower interest rates and for longer period than used models. Automakers often offer cut-rate loans through their financing divisions as low as zero percent on some models, and we’ve seen new-car loan deals offered for as long as 84 months. You’ll need to have a stellar credit rating to qualify for the lowest rates, however.

If your credit is poor you may have no other choice but to shop for a used car at a dealership that can offer so-called “subprime” car loans to those with low credit scores, though be aware that interest rates here can be as stiff as 30 percent.

Finally, new vehicles always come with full factory warranties that can extend as long as 10 years on powertrain equipment, and often include value-added programs like roadside assistance and free scheduled maintenance plans. Some used cars come with warranties, though these are often just for brief periods of 30 to 90 days. The best bets in this regard are “factory certified” late-model vehicles offered by new-car dealers that have undergone a rigorous inspection and carry extended warranties for three or more years.

The best reason to shop in the used-vehicle market is that it’s almost always more affordable than buying a new one. That’s because new vehicles take a significant hit in terms of depreciation literally the moment after the title is transferred. Depending on the make and model, a car can lose as much as a third of its original value after the first year on the road, and a half of its initial cost after three or four years. Those looking for the best values among used cars will want to look for otherwise amenable models that, for whatever reasons, suffer the lowest resale values.

The biggest downside to buying a used car is that it almost always involves an element of risk, with the vast majority sold on an “as is“ basis. Even if a given pre-owned model seems to be in good operating condition, there are always questions regarding how well it’s been maintained and/or how gently it’s been driven. Once a car or truck reaches a certain age, ongoing repairs, both for wear-and-tear elements like the battery, tires, belts and hoses, and for other components that tend to fail at least once before hitting the 100,000-mile mark. Many cars require changing their engines’ timing belts at around 80,000 miles to prevent incurring further damage should it snap, and this can be a particularly costly repair.

The biggest downside to buying a used car is that it almost always involves an element of risk, with the vast majority sold on an “as is“ basis.

That’s why it’s prudent to always take a used vehicle you’re considering to a trusted mechanic for inspection, both to determine its current operating status and to help identify which components are most likely to need attention down the road. It also helps in this regard to buy a used car that comes with a warranty, even if it’s the remaining portion of the model’s original new-vehicle coverage. Again, if you can afford one, choose a late-model certified used car that comes with extended warranty coverage for added peace of mind.

Used-vehicle fraud is also a concern these days, particularly via online classified ad sites like Craigslist. A common scam is to advertise a car at a “too good to be true” price that’s located out of state and demand payment be sent to a third-party using a funds transfer service; unfortunately, once the money changes hands the seller is never heard from again. Used-vehicle shoppers also need to beware of involves vehicle “cloning,” in which thieves obtain legitimate VIN numbers from cars matching the year, make, model and color of a stolen or scrapped vehicle and swap or duplicate the identifying digits.

Fortunately, title search services like CarFax and AutoCheck can go a long way to assuage a used-car buyer’s fears in this regard. Such reports will disclose if the vehicle’s been flood-damaged or otherwise salvaged and rebuilt, and will give you an idea of how well the car was maintained, how many times its changed hands, and whether it’s been in an accident. If the dealer doesn’t already include a title search it’s well worth paying out of pocket for one.

When A New Car Is The Better Deal And Vice-Versa

Though consumers can almost always save money by choosing a used car or truck instead of a new one, there are circumstances that can flip that notion, especially for those who are considering a later-model ride. That’s because automakers have been upping the ante in recent months by offering hefty cash rebates and other incentives, especially on slower selling models, to help keep new-vehicle sales strong.

We’ve seen cash rebates as rich as $10,000 on some models, though amounts in the $1,000-$5,000 range are the most common. In some cases, a particularly hefty cash back deal can tip the proverbial scales in favor of a new model. Let’s take a look at the Jeep Cherokee, which was recently being offered with a cash rebate of up to $5,000. That would effectively bring the MSRP of the midrange Latitude model to $21,540. According to Kelley Blue Book, the retail price of a certified used Latitude with 24,000 miles from the 2015 model year is $22,144.

We’re also seeing new vehicles that are being offered with a combination of both a cash rebate and cut-rate financing that can likewise even the playing field with late-model used cars and trucks. For example, the Ram 1500 full-size pickup truck was recently offered with $2,500 cash back and zero percent financing for 36 months. Assuming a buyer will be placing a $3,000 down payment and will be financing the purchase for three years (in an admittedly simplistic comparison), here’s how things shake out:

Work the numbers and examine a vehicular transaction from every angle to assure you’re getting the best deal.

On the other hand, if a given vehicle suffers a particularly deep drop in resale value over the first year or two, choosing a late-model used alternative can be a financial no-brainer. Take for example, the Fiat 500L subcompact wagon, which has a base sticker price at around $22,000. Having among the worst resale values in the industry, a one-year old 500L retails for just $14,600 according to KBB; that’s a $7,400 price difference for a car that’s virtually identical new versus used, save for the miles it’s been driven.

The bottom line then is to work the numbers and examine a vehicular transaction from every angle to assure you’re getting the best deal on a car or truck that best meets your needs and budget, whether it’s new or used.