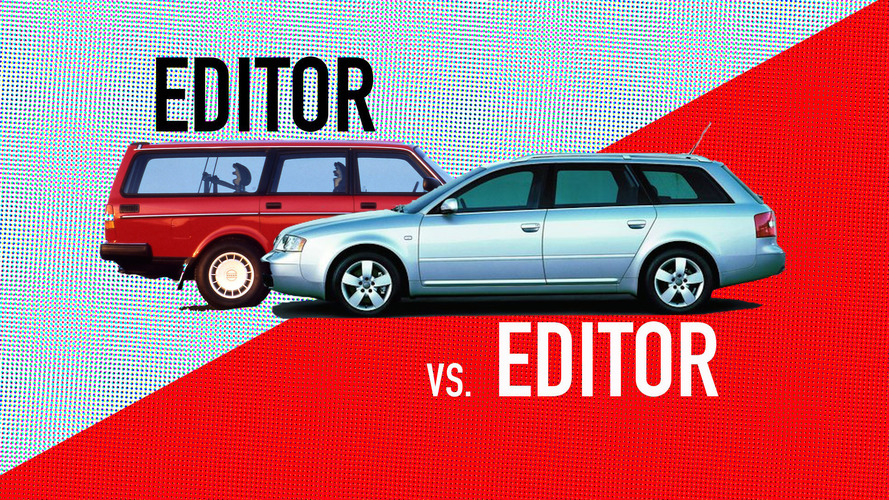 Jake and Seyth face off over reasonably priced wagons. Would you pick the classic Volvo 240 box or the newer Audi?

Motor1 editors can, and do, argue about everything. We’re putting that proclivity to good use in our new Editor vs. Editor series. The concept is simple: pick a car type, pick a price point, and then each editor tries to pick a winner within those parameters. We’ll present our arguments below, but it’s up to you to decide who the the ultimate champion will be. Tell us, in comments, who won the battle and why.

Seyth Miersma: To me the latest edition of Volvo’s 240 wagon is a no-brainer here. This is the iconic station wagon; Volvo’s straight-line styling made the car utterly unmistakable when it was on sale, and still a common sight on roadways. But what’s interesting to me is that, increasingly, the blunt face and profile is seen (rightly) as a seminal piece of industrial design. Because of that – and a well-deserved reputation for bulletproof operation – the kind of very-well-looked-after 240 you can get for ten grand these days, will probably appreciate in value.

Jake Holmes: The 240 was great… in the 1990s. The far more modern style and performance of this Audi A6 Avant, however, are the clear winners in this category. You get one of my favorite era of Audi interior and exterior design, that fantastic 3.0-liter V6 (220 horsepower), and lovely fat five-spoke wheels. The A6 hasn’t aged too badly at all, and while the interior has nary a touchscreen or Virtual Cockpit in sight, I can’t help but lust after the teutonic simplicity and precision of its cabin. Note the red LCD readouts and wood trim for extra early-2000s-German coolness.

SM: Yes, note the German coolness as it quietly rusts into pull-and-pay junkyard fodder in your driveway. Choosing perhaps the scariest era of VW Group mechanical quality is a bold move, Mr. Holmes, but I assume Motor1 readers will back me up when I say, “better you than me.” I’ll be the first to admit that the 2.3-liter four-cylinder under the 240 hood is not going to blow any doors off – a factory-rated 114 horsepower doesn’t win this argument for me. But the fact the engine will start and run for hundreds of thousands, if not millions, of miles, probably will. Take care of the 240 and it’ll take care of you, long after the last Dot Com Era A6 has retired from the road.

JH: You’re right, Seyth, that essentially any part of the Volvo 240 can be repaired with a screwdriver and a socket wrench. And you’re also right that in 2002, Audi engineering was known neither for its longevity nor ease of maintenance. I won’t argue that the A6 will probably be tougher and more expensive to fix over the long run. What I’m arguing, though, is that the car will make me happier while it is running: roomier, a bigger engine, modern safety equipment, all-wheel drive, leather seats, better sound deadening. Plus, let’s not forget, actual design and style instead of the ruler-straight boxy look of the Volvo. The 240 is a wonderful classic car, of course, but at this point Seyth’s example is 24 years old – and the 240 line was first introduced 43 years ago. Even the most durable car needs some TLC after that long on the road.

SM: I’ll concede the old vs. new argument, and even the fun to drive one. But I will not give ground on the fundamental superiority of the 240 as a wagon. Lest you forget, my choice has rear-facing jump seats. How do I drop a mic in a blog post?

Listen, in the final analysis my pick has a more timeless style, a better chance of achieving non-damaging ignition every day, and will actually turn your $10,000 investment into a return if things keep trending the way they have been. My exemplar for this argument, a 103,000-mile car, sold with no reserve on Bring A Trailer for $9,000. That sum would have been inconceivable five years ago. How much does a valve job on that 3.0-liter run again?

JH: Jump seats? Practicality? I accept that there’s a reason Volvo sold 2.8 million 240s over the years and why buyers still pay obscene prices for used ones today: They’re plain good cars. What I can’t accept is driving around in a dull car with few creature comforts and styling as inspired as a toaster just because it’s a little bit less likely to break. If civilization were crumbling and I needed a vehicle I could probably make last forever, sure, Volvo 240. But I live in the suburbs, so I want to roll in the style and comfort of the Audi A6 Avant. Come on, how great will it look blasting through a snow storm sideways on winter tires?