Just don’t stall the engine. That’s all I have on my mind on a sunny Wednesday at Bilster Berg.

And my track test in the BMW M6 GT3 does indeed have a lot in common with the training to get your driver’s license. Actually more than you would think as there are a lot of lessons to be learned before you even touch the wheel. The big question is whether I have paid enough attention during the theoretical parts of my training.

It starts with a ten-page dossier explaining all things technical about my track test, featuring a lot of data, procedures, and dos and don’ts. How do I start the car? When do I shift? What do I have to do in an emergency? And lots of other basic questions. All covered, I should be ready to go. 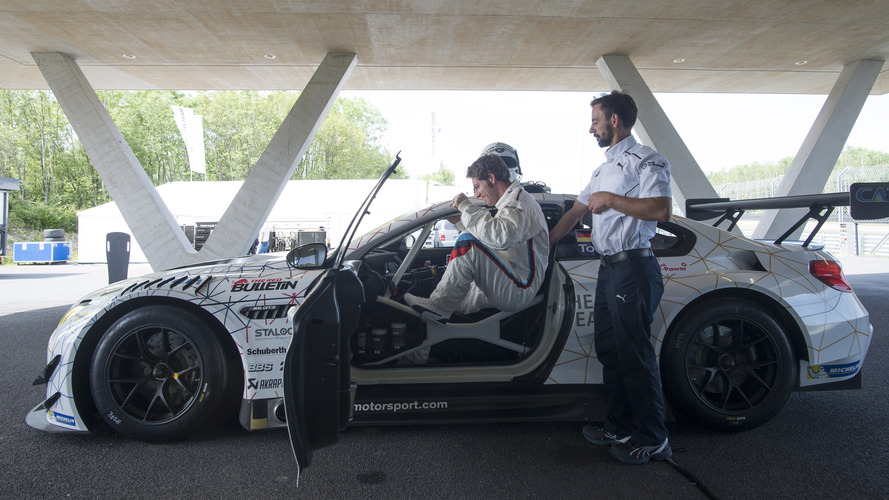 The M6 is a very different kind of machine. And it shows during the pre-test preparation.

After I have studied the dossier in detail I am paired with a senior BMW instructor to go through it all once more, and in even more detail. This takes a bit of time as the 500-plus-horsepower M6 GT3 is the fastest and certainly most complex car I’ve driven so far. And my past experiences include only a few test outings in touring cars. The M6 is a very different kind of machine. And it shows during the pre-test preparation.

Take the extraction training, for example. You have to complete it in order to qualify for the run. You fail, you don’t drive – simple as that. In practice it means getting into the car fully harnessed with helmet, HANS, belts, radio, safety net at the door, and rollcage all around you. Then from the word “Go!” you only have seven seconds to clear the car, move around the door to the hood, and put your hand on the engine cover.

It is as tough as it sounds. But with a few explanations of what to do first and how to move quickly (and with your eyes closed!) I get there, even right at the first attempt – a relief. But my racing gear is all sweaty already. 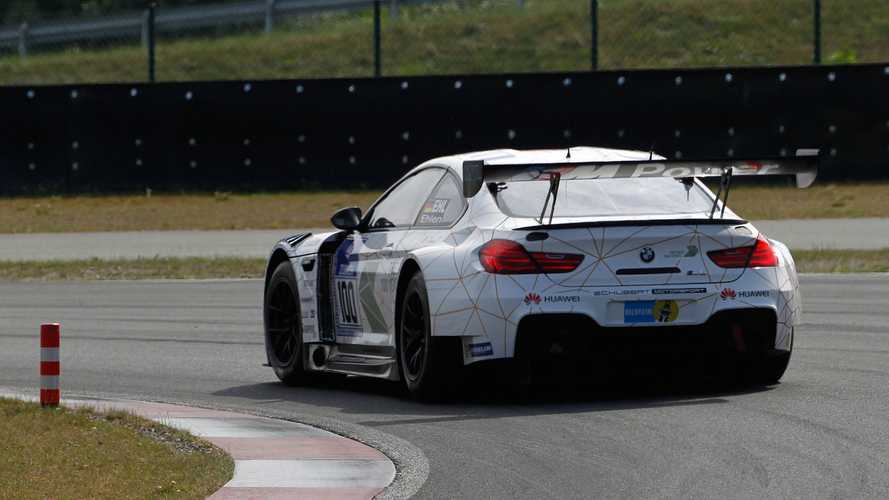 And the adrenaline keeps pumping because I’m about to go out on track for the first time. I sit shotgun next to DTM driver Martin Tomczyk in a BMW 235i.

This is a totally new experience for me as I know Bilster Berg only from the few pictures and videos I saw before heading there. But reality always is different, and I’m startled by seeing it firsthand from inside the car while trying to remember as much as possible from our reconnaissance laps.

Tomczyk hands over the wheel to me and gets in the 235i sister car to give me a few guided laps around the Ostschleife. And I start to get a feeling for the corners, the braking areas, and the speeds.

Then I’m alone on track to further familiarize myself with everything. And I have to say, the 235i is a great pleasure to drive already. So is the track, which is flowing and twisty. But there’s not (yet) time to enjoy all this for too long as I’m called back to the pits for the most interesting part. 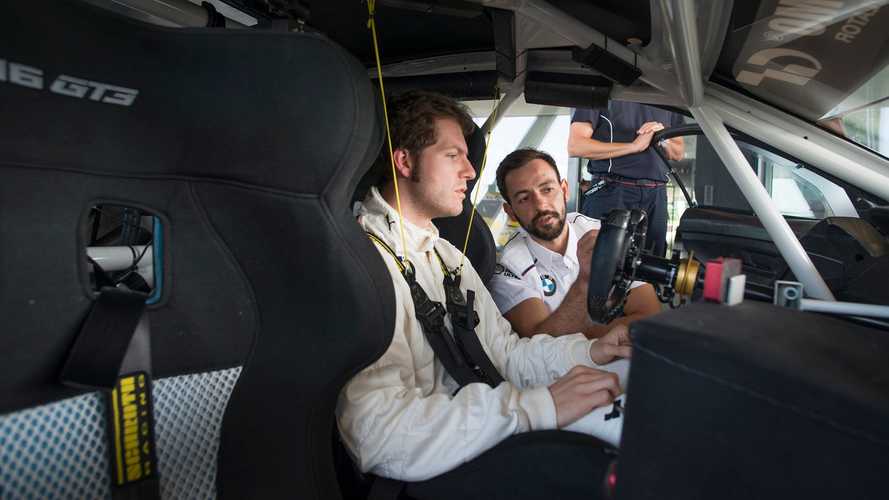 At the garage it’s out of the touring car and straight into the GT3. The “beast,” as Tomczyk refers to the M6. I have to admit there is a sense of anticipation and excitement on my side as I get strapped into the racing seat. Just a few days before this, I had witnessed the M6 in action at the 2016 Nürburgring 24 Hours. Now my hands grab the steering wheel of the very same car.

Once inside, I’m already focused on one thing alone: the launch. Will I be able to even start the car and get going without stalling it? Well, at my latest track test in the Opel Astra TCR touring car it didn’t work too well a couple of times... so I’m a bit nervous about this one for sure.

Considering the stressful conditions, I’m happy to have the support of “my” race engineer, Jeroen Den Boer, via radio. He guides me (once again) through all the necessary steps to start the car. Main power switch, on; Ignition, on; start! And there you are, that deep growling from under the hood, and the car comes to life.

As I’m told to get going the big moment has finally arrived. I’m on the clutch, feeling for the bite point, right foot on the accelerator, soft at first, then harder, mentally crossing my fingers not to make a fool of myself. But – hey! – the machine is moving. 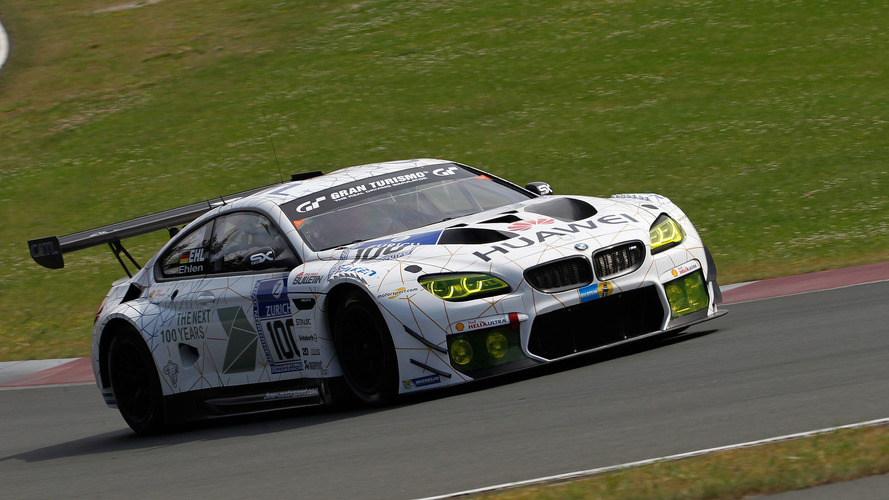 While driving under 40 miles per hour in the pit lane, you can feel that this car hasn’t been made for low speed. It’s anxious to get going fast, and so am I.

It’s a jumpy kind of start, but the M6 and I are rolling. However, there’s not a moment to waste as Tomczyk in the 235i is already waiting for me to catch up at the end of the pit lane – he will guide me around again to see how I cope with the M6.

While driving under 40 miles per hour in the pit lane, you can feel that this car hasn’t been made for low speed. It’s anxious to get going fast, and so am I. But for the time being it’s all about learning again, developing a feeling for the stronger package I’m driving now.

And boy, what a difference. The M6 is not only much bigger than the 235i but also a lot more powerful, albeit very agile and easy to handle. And that sound… I hear it properly for the first time when, after a few guided laps, I get the go ahead to run without the leading car. Bilster Berg, the M6 and I, here we go. 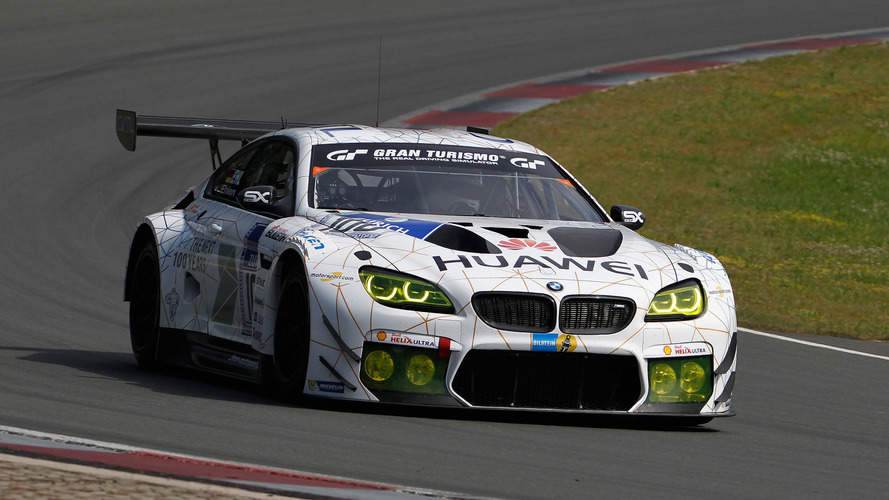 Time To See What It’s Got

Finally, it’s pedal to the metal on the longest straight. The dash lights signal me to upshift every few seconds, and I’m pushed into my seat every time I pull the shift paddle at the steering wheel.

I’m nearly 140 mph and on high revs in fourth gear, when I start to brake for the long left hander that leads to the rear part of the circuit where it gets twisty – and hilly. But the M6 is a pleasure to drive everywhere. It’s stable in the corners and easy to handle. I feel secure and safe enough to really concentrate on being fast, even at the end of the second big straight where you need to brake uphill and make sure to hit the line just right. After only a few laps I’m being ordered back to the pits for debriefing with my engineer and the crew. It’s on the laptop screen where my performance will be analyzed.

I’m happy with my laps so far, but well, there’s some disillusionment, too. I mostly used the correct gears but didn’t go on the power soon enough after the corners. And the biggest ‘problem’ is my braking. 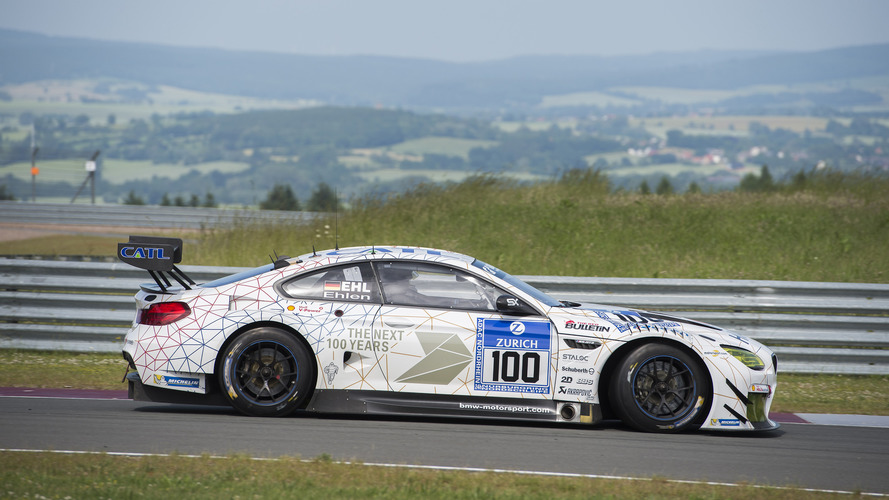 The M6 is a pleasure to drive everywhere. It’s stable in the corners and easy to handle.

“You’re braking with a pressure of 35 kilograms [77 pounds],” Den Boer explains. And in the reference data we have from BMW works driver Lucas Luhr we see braking with double that force. So there’s plenty of room for improvement on my side. Also, Der Boer tells me, I could brake a bit later, and harder, of course, to gain even more time.

Then again, during a track test you want to see a bit of performance, but you definitely don’t want to crash the car. So it is with mixed feelings that I get behind the wheel again, and with the aim to at least achieve a small improvement on my second stint.

The starting procedure is the same all over again. But when I hit the start button there’s a strange sound and the engine won’t come alive. I’m puzzled, but only for a moment. “Ignition,” Der Boer tells me on the radio. “You have to switch on the ignition first.” Whoops.

On my second attempt the M6’s engine rumbles to life and I manage to put the car in drive, too, without stalling. This bodes well for the next laps in the car which I will undertake completely on my own again as Tomczyk waves me by just after the pitlane exit. 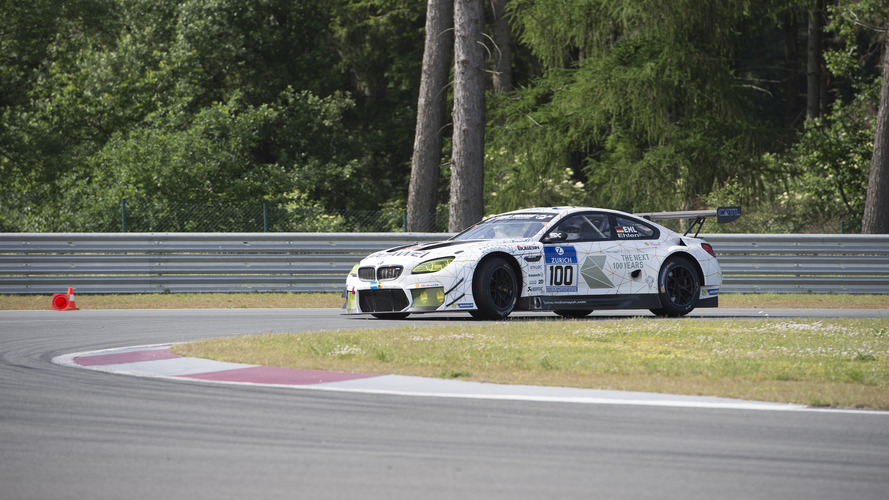 Driving this machine is stressful, both physically and mentally. But the car is designed to make you feel at ease immediately, because it just does what you want it to.

I go flat-out on the long straight, and I even manage to accelerate into fifth gear for a moment before braking slightly for the fast left-hander. The braking point for the twisty rear part, however, I miss. And I’m angry with myself for messing up the first lap already.

But I try hard to work on my braking on the back straight. I hit the pedal harder this time, and a bit later, too. And I’m thankful for the belts that hold me in place in my seat when I do. It’s definitely tougher now, but I have no time to rest: around the hairpin in second gear, briefly up to third in the left-hander, back to second, right, left and on the throttle for the last short straight.

And there it is again, the important braking point ahead of the chicane, a spot where you can gain or lose a lot of lap time. This time, however, there will be no overall best for me as, again, I’m a bit late on the brakes and have to work hard to turn the car into the left, right, left chicane. Concentration is key for this kind of operation, so I vow to do better. Even though I’m already sweating cats and dogs inside the car. 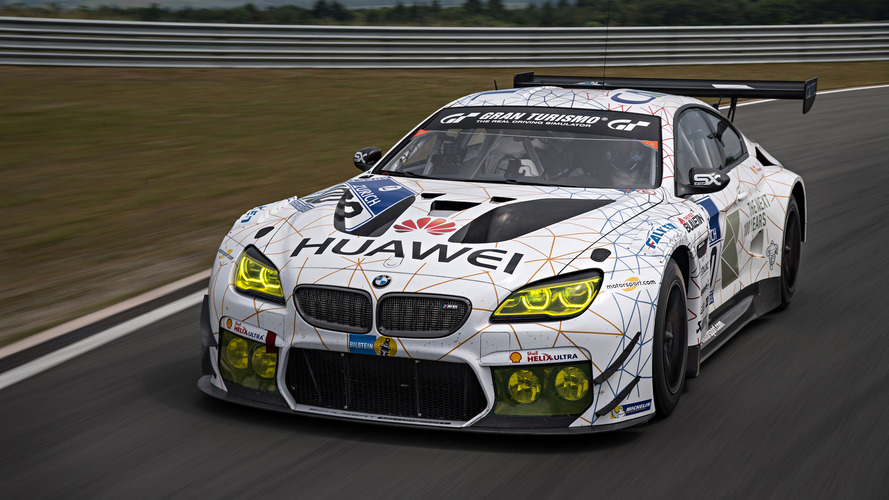 Working Hard Behind The Wheel

Driving this machine is stressful, both physically and mentally. But the car is designed to make you feel at ease immediately, because it just does what you want it to. This is why I find new confidence, and my third flying lap is my fastest, and feels like it.

On the other hand there is this little voice in your head that urges you on to go try even better all the time. Go with the flow, now that you have the chance. Just do it, push a little more.

But it’s fast-forward to reality only in my fourth lap when I miss the braking spot again for the chicane. There it is, my personal limit. And suddenly I don’t want to explore what lies beyond.
So I refrain from pushing too much on my final laps and I just enjoy the moment, working the wheel of this great piece of engineering, guiding it around a beautiful yet tricky circuit. A few minutes later I’m back in the pits and I park the car in front of the mechanics. What a ride.

It gets even better as once again I’m summoned to the laptop for a quick debrief.
Der Boer is happy with my performance. My braking was harder, my acceleration better, and I improved my personal best by a total of five seconds on a 65-second lap. That’s something to be happy about.

There’s more I learned at Bilster Berg. For instance, a bit of coaching can help you to really get to terms with a proper race car. And the M6 is a vehicle even an amateur driver like me can control with ease. You certainly feel the thrill of driving a real race car, which it is. And it leaves you wanting more.