We sample the hot-hatch-on-stilts for a few minutes in the Bay Area.

The 2022 Hyundai Kona N is the automaker’s newest full-fledged performance model, putting the Veloster N’s potent powertrain in a slightly more practical crossover body. We didn’t think we’d be getting behind the wheel of the sassy SUV for at least a few weeks, but Hyundai pulled a fast one on us and gave us some seat time in a pre-production example during our first drive of the 2022 Santa Cruz pickup.

With only a few minutes available to put the Kona N through its paces, we saddled up and headed toward the Bay Area’s Skyline Drive, a serpentine ribbon of pavement near Palo Alto. Skyline is full of tight hairpin corners and plenty of bumps and cracks in the asphalt, meaning it’d be a perfect place to test the nimble Hyundai’s mettle at reasonable speeds. Without giving away the ending, our brief time in the Kona N has us all the more excited to slip behind the wheel for a more extended test drive.

Like the sportiest Elantra and Veloster, the Kona has two pale-blue buttons on the steering wheel, activating either the vehicle’s most aggressive N driving mode or a pair of owner-customizable settings. Do yourself a favor – before you turn the vehicle over, make sure that multi-mode exhaust is cranked to its most vociferous setting. If you do so, you’ll be met with a decidedly un-Konalike bark from the N’s twin exhaust outlets, with plenty of burble and crackle when you rev it up. It’s the first indicator, apart from the wild body kit and well-shaped performance seats, that you’re driving something special.

That sound is courtesy of a turbocharged 2.0-liter inline-four, which makes a healthy 276 horsepower and 289 pound-feet. Since the Kona N is front-wheel drive, some of that grunt turns into wheelspin from a stop, and once the tires regain grip, they play tug-of-war with the steering wheel in spite of the Kona’s standard electronic limited-slip front differential. 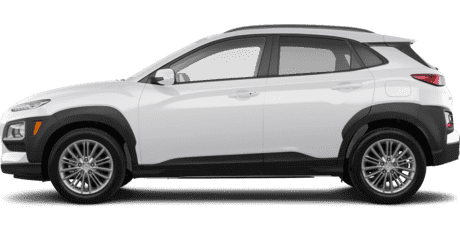 However, the torque steer is more charming than annoying, giving the Kona a much-needed dose of driving personality reminiscent of an old Acura Integra or first-generation Mazdaspeed3. As in those vehicles, the wheel fight is part of the vehicle’s allure, as though you’re taming a wild beast into submission.

The eight-speed dual-clutch transmission serves up aggressive shifts in N mode accompanied by a healthy little snarl from the tailpipes with each gear change. Responsive paddle shifters are standard, giving the driver plenty of control if desired. That said, the transmission does an excellent job of choosing gears on its own, offering ready downshifts under hard braking and holding gears when coasting, even at redline.

There’s also a bright red “N Grin Shift” button on the steering wheel that readies the engine for temporary overboost and puts the transmission on high alert. It’s perfect for swift passing maneuvers (on either the highway or the track), giving the driver 20 seconds of hyperactive performance before deactivating for a minute to save the vehicle from munching itself.

Around corners, the Kona N is an obedient driving partner, with surprisingly sharp turn-in and limited body roll thanks to stiffened, adaptive dampers and thoroughly revised suspension geometry. There’s some understeer when powering out of corners, but the Kona is short enough that it responds to throttle lift with a tiny touch of balancing oversteer. In its stiffest Sport Plus setting, the suspension beats up the occupants a fair amount, so a road like Skyline merits using Sport or even Normal – even at their cushiest, those dampers are still plenty stiff.

Our brief time piloting the 2022 Hyundai Kona N came to an end after a short jaunt down the freeway, and here it showed a few warts. Aside from the choppy ride over expansion joints, the Kona never really quiets down, with some omnipresent exhaust drone regardless of what the sound baffles are doing. And it’s hard to ignore some chintzy interior materials and plastics, a holdover of the Kona’s budget-friendly pricing in non-N form.

However, it might be more comfortable on a daily commute than the other members of the N family, and hot hatch fans and performance newbies alike will find plenty to like about the Kona variant. We’ll get a lot more time in the sportiest Hyundai SUV soon, so be sure to stay tuned. But with plenty of driving fun and more interior and cargo space than a Veloster, the Kona N might be one of our new favorite Hyundais.