The Spanish electric hypercar has more than 1,100 hp and costs nearly $2 million before taxes. We drove it on the track.

After more than 70 years of inactivity, Hispano Suiza showed up at the 2019 Geneva Motor Show wanting to make a lot of noise by showing a unique creation to the public and attending media: the new Carmen. It's an electric hypercar with a design based on the historical legacy of the brand, which takes its name from the granddaughter of the founder: Carmen Mateu.

Since that day back in Geneva, Hispano Suiza has been back under the focus of the automotive world. Founded in Barcelona in 1904 by Damià Mateu and Marc Birkigt, the company's trademark stork (check the logo) took flight again for the first time since the cessation of production way back in 1946.

Since it the Carmen's debut in Geneva, we've been resolute about wanting try this exclusive sports car, which is manufactured by hand according to the Spanish firm's values of exclusivity and sportsmanship. And now we can tell you, that that time has come.

However, since Motor1.com always seeks excellence, our test focuses on the Hispano Suiza Carmen Boulogne, an even more limited series of the Carmen, of which only five units will be assembled, destined for the most select collectors in the world.

How is this special edition different? Beyond offering more power and being even more expensive, its design and tuning are inspired by the world of motorsport. And there we find the link with Boulogne, the French city where the George Boillot Cup was held and different versions of the Swiss Hispanic H6 prevailed in 1921, 1922, and 1923. 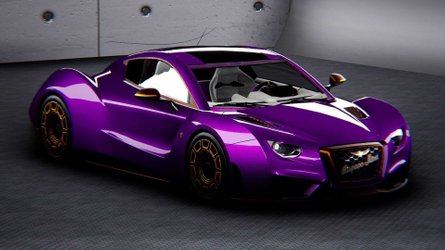 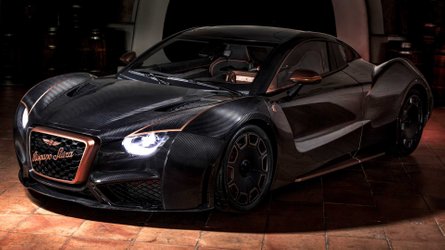 That connection to motorsport is reflected in the Carmen Boulogne's spectacular bodywork, like its visible carbon fiber or in the fact that the rear wheel fairings on the 'conventional' Carmen have been dispensed with.

Of course, since each Carmen is fully configured à la carte according to the tastes of each driver, the possibilities of customization are endless. And if not, ask Michael Fux, who has paid an additional 300,000 euros just to make his car bright pink.

The most impressive element of the car, however, are its automatic vertical-opening doors, which we would normally call butterfly wings, but which, on this occasion, we allow ourselves the license to name stork wings.

In fact, the figure of company's iconic fowl can be seen in different places around the car, such as in the taillights or next to the exterior mirrors. It's a symbol that pays tribute to a French flying ace  who perished during World War I – he was flying an airplane powered by Hispano Suiza.

Inside you can appreciate the quality and design of a car that is assembled entirely by hand. No expense was spared on materials, such as the best leather or Alcantara fabric, nor technology as evidenced by the two large digital screens: one for the instrumentation and another for the multimedia system and other functions, such as climate control or driving modes.

We appreciate the seats most, though. They're excellent buckets with multiple adjustments and feature a carbon fiber structure. Because that's another key point of the Carmen Boulogne: the search for the greatest possible lightness.

Moving on to the mechanical part, QEV Technologies, Hispano Suiza's technological partner, comes into play. This company specializes in electric mobility and motorsport. Among its biggest achievements is being crowned champion of the inaugural season of Formula E in 2015, together with the NEXTEV TCR team and driver Nelson Piquet Jr.

That success in competition translates to a 100% electric drivetrain composed of two motors moving the rear wheels. Those motors peak at 1,100 horsepower, and although that's official number, the brand confirmed to Motor1.com that, technically, it would be possible to reach 1,200 hp.

Our first go with the Carmen Boulogne on track took place in the passenger seat with Luis Pérez-Sala behind the wheel, a driver who competed in F1 in 1988 and 1989 (among many other things) and who's been a major contributor to the car's development. In fact, this Carmen Boulogne is still a test-car even though they say it's 95% complete.

I discovered what the car is truly capable of with the Spanish driver behind the wheel, which is, to be blunt, transporting you to another dimension when you step on the throttle... errr... the gas... let's just call it the accelerator. When that pedal is pushed to the floor, more than 1,180 foot-pounds of torque reach the rear axle and the sensation is indescribable.

It's not just that your body is pushed back against the seat, it's also feeling your brain crushed back against your skull (though it still generates a smile). The Carmen Boulogne accelerates from 0 to 100 in just 2.6 seconds. And the maximum speed? Well, it is limited to 180 miles per hour.

Another aspect that surprised me, almost as much as the acceleration, is the Carmen Boulogne's braking power thanks to the aforementioned carbon ceramic equipment.

After the master class, it was my turn. And the truth is, I had mixed feelings about piloting this hypercard on my own. On the one hand, I couldn't be more excited; I've been dreaming of this moment for the last few months. But on the other hand, the pressure was immense because Hispano Suiza wanted the car back safe and sound. Here in Spain, the saying "he who breaks, pays" is serious business. Breaking a $2 million could mean even my great-grandchildren are still paying the bill.

As the door closed and I motored past the exit of pit lane, I already knew this was a special car, a sports car with a soul. It may have been because of the special sound generated inside the cabin, or perhaps it was seeing the Hispano Suiza logo on the steering wheel and being aware of all the legacy and history behind it.

In my case, I could not access the car's maximum power (in Sport mode, it's limited to only 680 hp), but I was more interested in exploring its driving dynamics, which should be sportier compared to the standard Carmen.

In fact, the Carmen Boulogne has a modified suspension that's firmer, which makes the car a real corner-devouring machine with an ease that borders on scary.

There's one factor that plays a fundamental role here: the extensive use of carbon fiber. And I'm not only talking about the body, but also about its use in the vehicle's chassis and frame, which barely registers 430 pounds. In fact, the total weight is outstanding for an electric car: 3,593 pounds.

If we add to this the rigidity of the whole car, its lowered center of gravity, and its tremendously precise and communicative steering, the result is obvious: a car that fulfills what is asked of every good sports car. And by this, I mean braking very late before the curve, pointing the car accurately in the turn, and getting on the accelerator as soon as possible.

From there, the magic of electronics comes into play, which ensures each rear wheel transmits full power to the ground, without wasting a single horse, thanks to an electronic control unit that distributes the torque accurately and tremendously fast.

And once you leave the track, you can just choose a drive mode with less power and continue driving comfortably. The suspension is firm and has little travel, but it absorbs irregularities well.

Meanwhile, the battery that powers the system is lithium-ion, has 700 cells, and is placed in a 'T' shape. Designed and assembled by the brand itself, it offers 80 kWh of capacity and a range slightly greater than 250 miles. Sources from Hispano Suiza confirm to us, though, that development of this battery is ongoing and in the future, owners will be offered the possibility of installing newer improved batteries.

By driving this car, I can finally understand why Alfonso XIII, the King of Spain from 1886 to 1931, came to fall in love with the engineering of Hispano Suizo back in the first third of the 20th century.

Of course, the Carmen Boulogne wins you over with its design, technology, power, and dynamism. If we add to that its limited circulation, just five units, it's not surprising that its price starts at nearly $2 million euros... before taxes. That's the price you pay for driving a bit of Spain's history.