The Titan XD returns for another year with modest improvements.

The 2020 Nissan Titan XD faces a serious uphill battle. Though, it didn’t feel like it based on our recent jaunt through the bottomlands of the Mississippi Delta, not far from where the one-ton truck is built outside Jackson, Mississippi."

That’s mostly because the Delta is flat as a board. What few bridges the Titan XDs we drove over needed a mere tap of the throttle to coax a little more power out of the big V8. If only everything in life was this effortless. 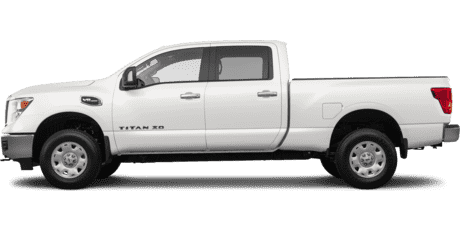 Underhood, every Titan – beefy XD or standard model with its shorter wheelbase and lower-duty frame and suspension – uses an updated 400-horsepower 5.6-liter V8 that’s as thirsty as it is powerful. Acceleration is brisk, even with a big load cinched to the trailer hitch, and the nine-speed automatic transmission offers big drivability gains over last year’s seven-speed.

The Titan XD’s gross vehicle weight rating is high enough to exempt it from EPA testing, but a truck with about 6,500 pounds worth of box trailer guzzled at around seven miles per gallon according to the trip computer. An unladen Titan, driven for about 120 miles at interstate speeds, doubled that figure during our testing, which means the Titan XD still uses a whole lot of the recommended premium fuel. Comically, the available navigation system has an electric vehicle charging spot point-of-interest icon. Maybe there’s a correlation between plug-in points and good restaurants?

What the engine gives up in efficiency it more than makes up for in towing confidence. Admittedly, our drive at just a smidge above sea level on largely flat ground is no match for hills or mountains, but the Titan XD has no problem getting up to and sustaining highway speeds. The V8 snarls under pressure in all the right ways. It’s kind of a shame this big, aluminum V8 hasn’t made its way into a sports car (and isn’t likely to any time soon). Then again, the twin-turbo V6 in the Nissan GT-R is the stuff of legends, so it’s not like Nissan is in need of another high-po powerplant.

Last year’s Cummins-built turbodiesel V8 is gone, though it’s not likely anyone will really miss it. The big engine was a towing champ, but it was expensive, and it never felt as at home in the big Titan as its 555 pound-feet of torque rating should have suggested.

Perhaps most impressive is the truck’s braking thanks to the vented discs that measure more than 14 inches at each corner. Pedal feel is also excellent. Highway stability is good, with the steering requiring limited corrections to sustain a straight path. The XD’s beefy tires – aired up to more than 70 psi to handle large loads – soak up expansion joints and shoddy blacktop patches. Compared to a recent standard-duty Titan tester, the XDs we hustled through the Deep South delivered an exceptionally composed ride. The 151.6-inch wheelbase is a foot longer than that on the standard truck, too, which certainly helps when it comes to ironing out bumpy roads.

It may lack the fine attention to detail found in high-grade Ram trucks, but the Titan’s interior has a comfortable, homey feel. The range-topping Titan Platinum Reserve has soft, quilted leather, and comically unconvincing fake wood. The mid-level Titan SL is nearly as plush inside, so don’t feel like you need the top-of-the-line trim. All crew cabs have the kind of exceptional interior space expected of vehicles that won’t fit in the average suburban American garage.

This year’s newly available panoramic moonroof opens up the big interior, at least visually. No part of the Titan’s inner trappings impress like a Ram’s do, though the layout is convenient enough. Controls are easy to reach and operate, even if they don’t move with high-end precision. At least the seats – which benefit from Nissan’s relationship with NASA – provide all-day comfort. Plenty of big bins and pockets offer good storage for habitual accumulators, and the rubberized insert that holds cell phones and tablets upright while allowing them to be plugged in is a particularly good design. Don’t look for an inductive charger, though.

The nine-inch touchscreen on higher-trim Titans responds quickly, and boasts an unusually sharp display. If only the backup and surround-view cameras were as sharp; they produce such a muddy image that drivers may assume their lenses are dirty. They’re not.

Out the Titan XD’s big windows, and past its hefty, optional trailering mirrors, immense swampland full of insects and reptiles we’d rather not meet beckons. We stuck to the road and kept our reptilian encounters to the mini alligator heads and feet plied by truck stops. Just $14.99 at a Love’s Travel Stop buys you an alligator head with glass eyes and most of its teeth intact. That’s one way to spend your money, I guess.

Much like those Dixie truck stop trinkets, the Titan XD trundles forward with charm if not sophistication. Nissan understands that the Titan XD is not for everyone – how could it not, since sales are a mere sliver of what GM’s Silverado HD/Sierra HD, the Ford Super Duty, and Ram HD trucks rack up. This year, Nissan is offering the Titan XD in only one configuration: as a crew-cab body with four-wheel drive, so don’t expect the breadth of trims and body styles the domestics offer. The base Titan XD S starts at $44,580 and lacks only a trailer-brake controller to be legitimately useful. The Titan XD SV tickles $50,000, and it comes ready to handle a gooseneck trailer.

Ford asks less for an F-250 XLT with four-wheel drive, though admittedly the Nissan’s 5-year, 100,000-mile bumper-to-bumper warranty could come in handy for high-mile drivers. And it’s worth noting that the range-topping $61,690 Titan XD Platinum Reserve significantly undercuts the most luxurious rivals from Ford, GM, and Ram. For now, it seems Nissan is content with moving just a few Titan XDs, which exist to satisfy an unusually narrow niche of buyers who want more, but not too much more.