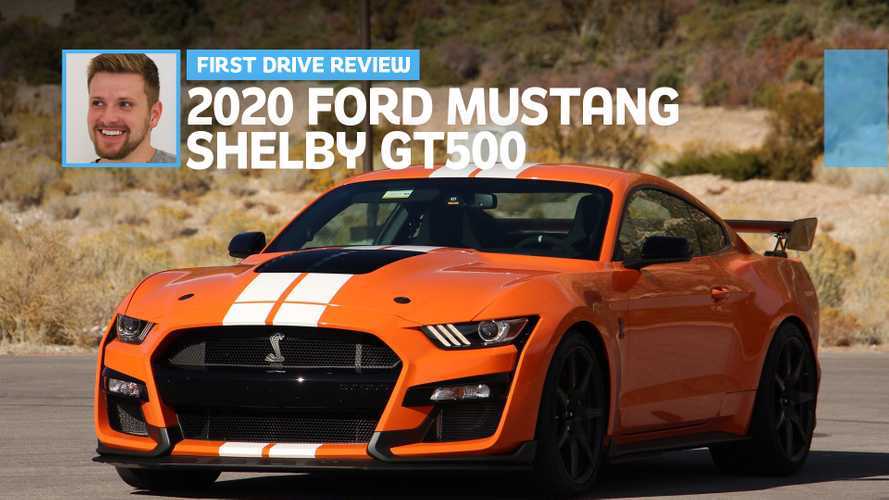 A Shelby Mustang by name, a supercar by any other measure.

Vegas is a city that embodies excess. Gold-plated hotels dot the skyline, neon signs illuminate the Strip, and a giant pyramid shoots a beam of light hundreds of feet into the air, for chrissake. Few cars exemplify that concept more than the new 2020 Ford Mustang Shelby GT500, the most powerful vehicle Ford has ever put on the road.

We traveled to Sin City, eager to put Ford's latest, arguably greatest pony car to work on the Las Vegas Motor Speedway road course, drag strip, and adjacent public roads. Obviously, the GT500's insane 760 horsepower figure is what draws us in. But its equally competent abilities on road, track, and drag strip, are what wowed us at the end of our drive.

The Shelby GT500’s designers took the term “subtle” and tossed it out of the 12th story window of Ford's Dearborn headquarters. This Mustang looks mean as hell, and we totally dig it. The gaping front fascia, flashy carbon fiber wing, and 20-inch wheels (both part of the optional Carbon Fiber Track pack), and Skittle-like exterior paint options scream “look at me” in the best way. But this excessive styling serves a purpose.

The Shelby's new gaping grille sucks up 50 percent more incoming air than the GT350, its front fascia openings having more than doubled in surface area. With the Carbon Fiber Track pack, the GT500 also produces more downforce than any Mustang before it (up to 550 pounds at 180 miles per hour), and with wider haunches and trim-specific 20-by-11-inch wheels, more lateral grip, too.

The GT500's supercharged 5.2-liter V8 essentially borrows the same block as the GT350. Though, it adopts a more traditional cross-plane layout rather than the GT350’s flat-plane setup; the GT500’s crankshaft yields 90 degrees of rotation versus its Shelby sibling’s 180 degrees. Additional reinforcement comes by way of things like extended bolts, which help the engine cope with the forces involved in producing 760 horsepower and 625 pound-feet of torque. That's a major improvement over the GT350's measly-by-comparison 526 horses and 429 lb-ft.

Civil In The Streets

Ford's pre-determined drive route up Mount Charleston near Las Vegas makes the perfect public proving ground for this Shelby GT500 test. At least, in theory. We briefly hustle the pony car through a handful of uphill switchbacks and fast straights, impressed by its flat cornering abilities and intoxicating straight-line acceleration, before local police politely puts a stop to our shenanigans.

It's no surprise that our eye-searing Twister Orange, carbon-fiber-draped Mustang draws the attention of a Clark County Sheriff's officer in a Ford Explorer Police Interceptor (brother, why hast thou forsaken me?) who suggests we “save it for the track.” Point taken. Knowing that Las Vegas Speedway waits for us in the wings anyway, our focus instead shifts to the car's everyday usability.

Even with a 760-hp supercharged V8, the GT500 is shockingly civil. The Shelby seamlessly utilizes just a fraction of its power when needed, making it a comfortable cruiser around town. Of course, the 760 horses are still available at a moment's notice, and easy to unleash, but by no means does this car feel overbearing. This is a refined daily driver.

Similar accolades apply to the standard MagneRide adaptive suspension, which softens up the Shelby’s ride somewhat versus the stiffer GT350. While engineers tout its abilities on track – and it is fantastic there, too (more on that later) – the setup makes for a comfortable ride in any of the initial three drive modes: Comfort, Normal, and Sport. Track mode, the fourth and final mode, is a bit too harsh for everyday driving. The big, cushy Recaro seats provide comfort for hours on end, and even with the new bulging hood, visibility doesn't take a dramatic hit thanks to the big, upright windshield and slim A-pillars.

Rear passengers, though, won't be as happy with this particular Shelby spec. Our tester, with the optional Carbon Fiber track pack ($18,500), adds neat exterior features like an adjustable carbon-fiber wing and new 20-inch carbon-fiber wheels, but removes the rear seat entirely. Because lightness. This particular car ditches navigation, too. Navigation and the 12-speaker audio system are only available as part of the $3,000 Tech package (separate from the Carbon Fiber pack). Honestly, we expect more standard features out of a $70,000 Mustang.

Freak On The Track

Mount Charleston offers just a small taste of the Shelby's true performance abilities. Las Vegas Speedway – in this case, the NASCAR track's adjacent drag strip and outer 2.4-mile road course – lets us unleash the GT500's true power. And unlike its predecessor, which even Ford admits is more of a quarter-mile car, this new Shelby GT500 proves it can actually corner, praise be.

In just the first few turns of the road course, the GT500 displays unrelenting composure that’s unmatched by any Mustang before it. Yes, even the GT350. Its turn-in abilities are lightning quick, cornering is dead flat, and there's tons of grip courtesy of the optional Pilot Sport Cup 2 tires (part of the Carbon Fiber Track pack). The GT500 reacts like a vehicle twice the price and a quarter of the size. It's that good.

Credit Ford engineers for building on the already exceptional GT350 base. The GT500 gets an advanced MagneRide suspension and unique geometry over its sibling (in part because of the larger wheels), as well as new electronic power steering and better springs, both front and back, all of which contribute to its refined feel.

The GT500 reacts like a vehicle twice the price and a quarter of the size.

Of course, the GT500 is still fast as hell. With its gas pedal to the floor, the car hits 130 miles per hour down the front and back straights without even shrugging. The supercharged V8 never runs out of stamina, and with Track mode engaged, throttle inputs are quicker, torque arrives more abruptly, and power is linear all the way up to the engine’s 7,500 RPM redline. You can play with the paddle shifters if you want, but the seven-speed dual-clutch gearbox is fantastic on its own. It responds with 80-millisecond up- and downshifts without any input from the driver. And no, there is no manual gearbox option.

With massive 16.5-inch front calipers and rotors by Brembo, the GT500 also has immense stopping power. Ford quotes a ridiculous 0-100-0 mph braking time of just 10.6 seconds (for reference, the Dodge Challenger Hellcat Redeye only does it in 11.8 seconds), and we believe it. On the track, the Shelby slows down the back straight to a manageable turn-in speed in an instant – there’s only a bit of wiggle from the rear.

Good news for drag racing fans: the GT500 is still stupidly quick on the strip. The Shelby rockets through the quarter mile in just 10.7 seconds, Ford says. But its launch control is imperfect. Where other systems punish the driver with intense G forces off the line, the GT500 briefly hesitates before taking off. The brake pedal bleeds out gradually once the driver lets off, taking a noticeable half second to build torque before the car sets off. Even then, power is flat – almost too flat – all the way through. In short, the Shelby doesn't punch you in the chest like the Hellcat and Demon do, as much as we wish it did. Our fastest time after three runs (much of it fiddling with the launch control system) is 11.5 seconds at 130 mph.

Fully Formed, For The Most Part

For all its strong points, the Shelby GT500 suffers slightly from being too similar to its lesser siblings inside. We expect features like the same 8.0-inch touchscreen with Sync and some chintzy materials to carry over – remember, the car the GT500 is based on starts at about $27,000. But buyers shelling out $70,300 super coupe probably expect more upgrades. Not even the $3,000 Technology pack, which adds navigation, a 12-speaker sound system, and memory seats, rescues the carryover cabin. One of the few things we’re happy to see carry over is the 12.0-inch digital instrument cluster from the EcoBoost and GT models.

There are some pricey options, as well. Hand-painted racing stripes cost as much as a whopping $10,000 (vinyl stripes are much cheaper at $1,000). And while we can't in good conscience lobby against the Carbon Fiber Track pack that includes those good 20-inch carbon wheels, Michelin Pilot Cup Sport 2 tires, and a carbon-fiber GT4 wing, we also acknowledge its $18,500 price is tough to swallow. The car we drove during our test asks more than $94,385 in total.

But those options are a relatively small price to pay for a car this good. The Ford Mustang Shelby GT500 exceeds all expectations – and then some. It's absurdly quick in a straight line, supercar-rivaling agile on the track, and surprisingly comfortable on the street. Nothing in the class, Challenger Hellcat and Chevrolet Camaro ZL1 included, even comes close to being as well-rounded (and ridiculously fun) as the Shelby GT500 is.