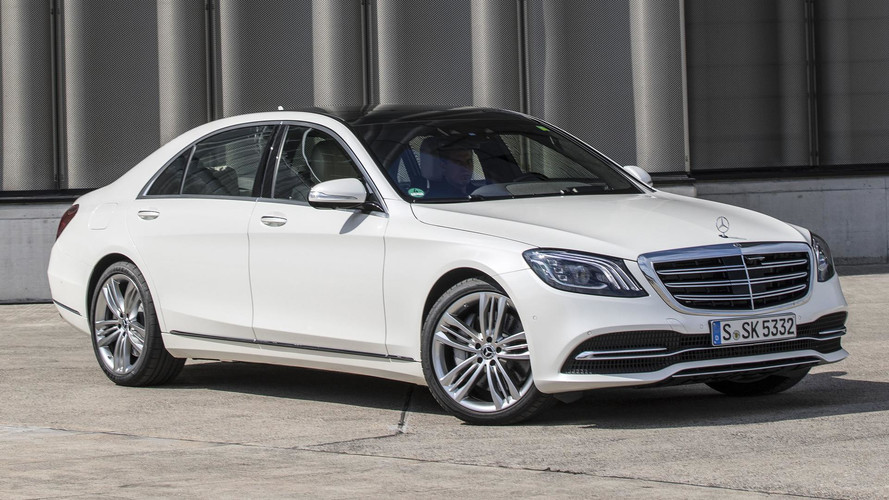 A mid-cycle update keeps Mercedes’ S-Class at the top of the luxury ranks.

Mercedes-Benz isn’t resting on its laurels for this mid-cycle enhancement of the S-Class sedan. During a product briefing in Zurich, no one is talking about addressing customer complaints or improving minor details. Instead, S-Class global development boss Hermann Storp lays down the objective with clear direction: “We want to build the best car in the world.”

After all, this isn’t just any Mercedes, it’s the S-Class. The flagship. “The benchmark car,” Storp affirms. More than all the others, this is the one car that must contain the full breadth of Mercedes DNA in flawless execution.

More than all the others, this is the one car that must contain the full breadth of Mercedes DNA in flawless execution.

Visual updates only tell a small part of the story, though the attention to detail here is nevertheless impressive. New headlights feature triple-line LED running lights, and the lower fascia air intakes are a bit more agape than before. The end result is a schnoz that’s a bit more assertive in its design, though I’m not sold on the final product – some of the handsome elegance from last year’s model is lost in this update, to my eyes. No matter, the rest of the S-Class shape is svelte and stately as ever, with minor tweaks to the taillamps and new wheel designs across the full range of models.

The U.S. gets eight variants in total. The S-Class range starts with the S450 and S450 4Matic, with the 362-horsepower, biturbocharged 3.0-liter V6 you’ll recognize from other 450-badged Mercedes models. Moving up the ladder, there’s the S560 and S560 4Matic, powered by the same 4.0-liter biturbo V8 found in the one-rung-up AMG S63, though obviously with less power. There’s a Mercedes-Maybach version of the S560 4Matic, as well, and if it’s hearty V12 oomph you seek, your choices are either the Maybach S650 or AMG S65, both with rear-wheel drive. All versions will hit U.S. showrooms later this year, with pricing to be announced closer to that time, and Mercedes says a plug-in hybrid version will arrive in the near future, as well.

I’d also be remiss if I didn’t mention the new S500 that’ll be sold in other markets, complete with a brand-new, 3.0-liter, biturbo straight-six that’s both more powerful and more efficient than the older V6 we’re getting in the S450. Yes, I’m also curious as to what the hell Mercedes is thinking by not offering this engine in the U.S-spec model, but company officials assure me it will arrive in our market eventually, just not in the S-Class. (Think CLS. Or AMG.)

Don’t let that AMG heart fool you: this is still a first-rate luxury sedan that’s more about comfortable cruising than canyon carving.

Despite this engine’s employment under the hood of the yacht-like S560, there’s a lot of AMG character within. It begins with a growl upon startup – a hearty, robust V8 sound. There’s a wave of torque right from the moment you dig into the throttle, with silky-smooth and linear power delivery. It makes for a surprisingly quick S560, too, the all-important 0-60 run dispatched in just four and a half seconds. The nine-speed automatic transmission effortlessly and imperceptibly swaps cogs, never executing a harsh shift even under aggressive driving behavior. Indeed, this engine is capable of a lot, but Mercedes’ 9G-Tronic automatic ensures that the AMG-ness never overstates the S560’s intended mission of being a formidable luxury barge. The S560 is unflappable, its refinement top notch.

In other words, don’t let that AMG heart fool you: this is still a first-rate luxury sedan that’s more about comfortable cruising than canyon carving. Bodyroll is present in corners, the steering is nicely weighted but appropriately devoid of feedback, and the air suspension filters out as many harsh surfaces as possible. Still, the eagerness of this 4.0-liter engine mean the S560 doesn’t hate being pressed into service for the occasional bit of sporty driving. But if spirited drives or hugely fast autobahn runs are your thing, might I suggest the AMG S63 – it uses the same V8 as the S560, but turns up the wick to the tune of 603 hp and 664 lb-ft. It’s fantastic.

Fully autonomous cars may still be many years off, but never before have I so easily been able to sip my coffee and fiddle with the infotainment settings while navigating foreign roads.

Of course, for as nice as the S-Class is to drive, it’s also wonderfully capable when you let all its semi-autonomous systems take over – let go and let God, as it were. The sheer number of let-us-do-it-for-you features here is exhaustive. Beyond Mercedes’ Distronic adaptive cruise control, there are assistance systems built in for the steering, emergency stopping, lane changing, speed limit detection, braking, blind spot monitoring, lane keeping, and collision avoidance, as well as all of the Pre-Safe active safety features. Fully autonomous cars may still be many years off, but never before have I so easily been able to sip my coffee and fiddle with the infotainment settings while navigating foreign roads.

Speaking of which, Mercedes’ latest COMAND interface now makes its way to the S-Class, complete with Apple CarPlay and Android Auto, if you’re into that sort of thing. This is all similar to what’s on offer in the smaller E-Class, with two screens that expand across two-thirds of the available dashboard real estate, controlled by either the traditional rotary knob and touchpad on the center console, or via the thumb sliders on the steering wheel. Those little thumb pads take some getting used to, but once you’ve figured out the operation, it’s pretty slick. That said, the COMAND interface itself isn’t super intuitive, with menus upon menus and menus within those menus. As I found out while winding along Swiss roads, a task as simple as connecting a Bluetooth audio player can be a bit more involved than you might think.

Thankfully, every knob and button and touchpad and dial is made of the finest material, so you don’t mind toggling a switch or running your fingertips along all of the beautifully detailed, brushed metal surfaces. The S-Class’ interior continues to set the standard for all luxury cars, period; even Bentley can’t compete with Mercedes these days. Nappa leather comes standard, as do 64 different interior lighting colors. Think of any luxury amenity, and I guarantee it’s available. In fact, Mercedes even went a step beyond the realm of what’s necessary with the creation of its Energizing Comfort controls. These pre-made settings alter the music, ambient color, seat massage settings, and even the air fragrance. “Enhanced health and wellness functionality boosts drivers’ attentiveness and well-being while reducing sleepiness and stress,” Mercedes says, and Hermann Storp insists it turns the S-Class into the “ultimate mobile oasis of well-being.” It all works well, but honestly, the functions made me laugh more than actually wrap me in some sort of on-the-go relaxation treatment.

But that’s proof of Mercedes’ attention to detail here: When you’ve already thought of everything, the only thing left to do is “energize comfort,” right? Every single facet of the S-Class experience has been thoroughly reexamined and improved upon to the highest level of quality and care. Is it the best car in the world? That seems a bit hyperbolic. But at the same time, I struggle to think of any one model that’s as wholly flawless as the complete S-Class range.