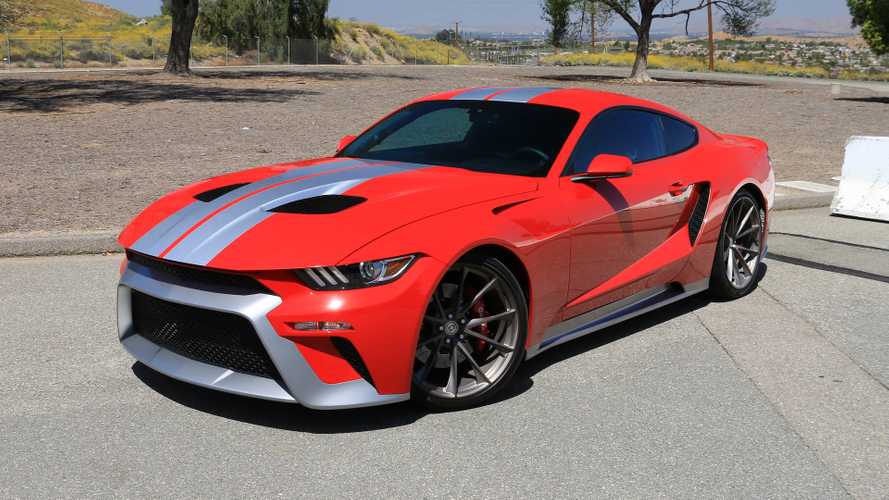 A tribute to two Ford performance icons backs up its wild styling with serious capability and meticulous craftsmanship.

“I didn’t want to build half a car,” explained Kenny Pfitzer, co-founder and CEO of Zero to 60 Designs, as he gave me a walkaround tour of the car formerly known as GTT, the company’s inaugural creation. “There’s a lot more to this project than just bumpers and paint.” After spending some time soaking in the laundry list of modifications required to bring this Mustang-meets-GT-supercar homage to life, and subsequently putting it through its paces on the back roads of Corona, California, it quickly became clear that this man definitely does not believe in half measures.

While Zero to 60 Designs is a relatively new player in the aftermarket scene, Pfitzer’s 20-year automotive resume includes more than 500 custom vehicle builds, including the Ford Bronco concept shown at the 2004 North American International Auto Show and the Dodge Challenger concept that would debut at NAIAS two years later, as well as an industry pedigree that includes fabricating for Metal Crafters USA and stints overseeing operations for West Coast Customs and Foose Designs.

It’s also clear from the grit on his shirt and the enthusiasm he expresses for the GTT that Pfitzer hasn’t relegated himself to some kind of hands-off conceptual guru role at Zero to 60 Designs – he’s still very much involved in the day-to-day build process for the projects his company takes on, and his new Southern California facility provides a one-stop shop for the design, engineering, fabrication, and assembly of vehicles like the GTT.

“Shortly after moving into the new shop, we had about six weeks to go before the 2016 SEMA show and we wanted to create something that would really showcase the work we’re capable of here,” he told me. “Being able to do almost everything in-house allows us to approach these projects really efficiently.”

While the GTT has seen its share of controversy, garnering enough attention to bring Ford’s lawyers into the fold over the naming convention used with the vehicle, one aspect which seems undeniable is the herculean effort that must have been required to bring together such an ambitious build in such a short amount of time.

Starting with a sixth-generation Mustang GT as the canvas, Zero to 60 transformed the bodywork using a combination of carbon fiber for the lower front fascia, side skirts, and rear diffuser, and a vacuum bag oven-cured epoxy composite for the rest of the body modifications. Sitting four inches wider at the rear and two inches wider up front versus a standard Mustang, while the GTT’s dual-personality aesthetic can be polarizing its presence is undeniable, as evidenced by the amount of attention it received whether stationary or in motion during my time with it.

While the GTT’s dual-personality aesthetic can be polarizing its presence is undeniable.

To give the GTT additional visual pop, Zero to 60 Designs applied its own custom shades of PPG paint using an in-house riff on Ferrari red and offsetting it with silver accents and stripes, while a Solar Gard ClearShield Pro film application protects the body surfaces from damage.

The interior of the GTT also sees a number of tweaks to set it apart from a factory Mustang. The cabin features custom leather with red double stitching along with an Alcantara headliner and visors, while custom-made speaker bezels, floor mats, and GTT-branded inserts on the Recaro seats serve to identify the car as something special when settling in behind the wheel. Zero to 60 Designs also offers audio upgrades for the GTT, an option well worth considering since the stereo is contending with the aural savagery that the powertrain can generate.

Providing that thoroughly American soundtrack is a warmed-over version of the Mustang GT’s 5.0-liter V8 that’s equipped with a ProCharger Stage 2 supercharger kit with custom tuning from SCT Performance, which plays its song through a custom-made three-inch exhaust system with Magnaflow mufflers. The combination can be dialed to dish out from 700 to over 800 horsepower depending on the specific tune used.

To keep the car’s overall capability balanced with all the additional grunt on tap, an Eibach Pro-Street-S coilover suspension has been fitted along with a set of Eibach sway bars, while upgraded Brembo brakes at all four corners provide enhanced stopping power versus the factory hardware. Rolling stock consists of forged 22-inch HRE P204 wheels which are wrapped in Pirelli P Zero rubber that measures 265 millimeters wide up front and 305 millimeters at the rear.

Taking this array of modifications into consideration, one could be rightfully wary that this car would be a handful in operation, but what’s perhaps most striking about the GTT is how civil and user-friendly it ultimately proved to be.

After vetting the durability of the stock six-speed gearbox and clutch, Zero to 60 Designs chose to leave the Mustang GT’s transmission setup as-is. That means the clutch effort and shifter action in the GTT are identical to that of a factory Mustang, so rowing your own doesn’t feel like a chore despite the additional power on offer.

This is a car you could take on a road trip without feeling like you need a visit to the chiropractor by the time you reach your destination.

It’s a similar story with the coilover suspension as well, which manages to corral body roll, squat and brake dive far better than the standard Mustang GT components while remaining surprisingly compliant around town. This is a car you could take on a road trip without feeling like you need a visit to the chiropractor by the time you reach your destination.

Drop the hammer and it’s a different story. While the throttle is mercifully easy to modulate, once I found enough open road to really uncork that blown V8 the GTT unleashed all manner of fury and fire, sprinting to 60 miles per hour in what my butt dyno estimates to be about 3.6 seconds. Mitigating wheelspin is a dark art all its own with this much motivation at the ready, though the Mustang’s traction control systems are clever enough to provide some assistance without feeling overly intrusive.

The custom Magnaflow exhaust is objectively loud when the go-pedal is stomped, yet somehow manages to not seem obnoxious when tooling around casually, avoiding the dreaded drone that many aftermarket exhaust systems exhibit at RPM ranges that somehow always manage to be right at freeway cruising speeds in top gear. The ProCharger blower provides its own sonic theatrics as well, whooshing and hissing when transitioning on and off throttle.

“This isn’t supposed to be some sort of display piece,” Pfitzer told me after I spent a few hours of quality time behind the wheel. “We engineered this car to be driven hard.”

At a base price of $124,950 and $149,000 all in and as-tested, the Ford Mustang GT modified by Zero to 60 Designs is available now through the company on a built-to-order basis. One could argue that this is a serious chunk of coin to drop on a car that is, at its core, a modified Mustang GT. While that may be true, you’re also not likely to find another one at your local Cars and Coffee, as Zero to 60 Designs plans to create no more than 50 examples of the GTT in total. There’s also a level of craftsmanship in the execution of the bodywork in particular that’s rarely found in the aftermarket – a number of curious onlookers mistook the GTT for a factory prototype, which is no doubt part of the reason why Ford felt the need to clarify its lack of direct connection to the GTT in no uncertain terms.

But that’s also exactly the kind of reaction that Zero to 60 Designs covets. “Park this thing next to just about any modern supercar at a car show and see which one gets more attention,” Pfitzer quipped. After witnessing the phenomenon first hand, count me among the believers.