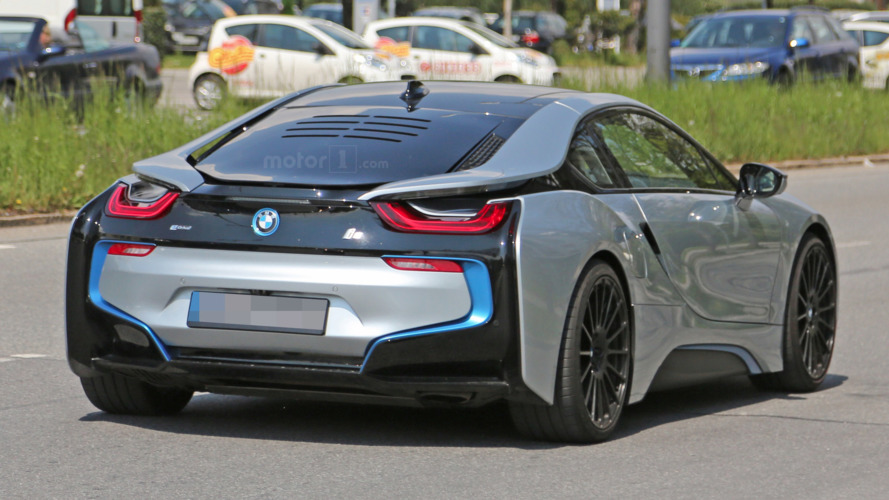 May be packing an upgraded engine.

The BMW i8 may be in store for a more powerful engine, and these spy photos appear to show a prototype testing in Germany. A new rear engine cover, which is opaque and features prominent cooling vents, is the biggest clue this i8 packs something unusual inside.

Given that the BMW i8 prototype spotted here appears to have not only additional engine cooling but also enlarged AP Racing brakes, it’s not a stretch to imagine it has more horsepower on tap than the standard plug-in hybrid.

There are two possibilities as to what, exactly, this prototype portends. Reports suggest that the 2018 BMW i8 will be refreshed with a stronger powertrain, thanks to upgrades to the 1.5-liter turbocharged gas engine, the electric motors, and the car’s six-speed automatic transmission. That could reportedly boost output to as much as 420 horsepower.

A more interesting rumor says that BMW is planning a performance-focused variant that could be called the i8S. The most recent rumblings said that BMW was planning to use either a 320-hp 2.0-liter biturbo four-cylinder engine or a 480-hp biturbo 3.0-liter inline-six, along with an upgraded electric motor to drive the front wheels. That car was expected to debut this year, to coincide with BMW’s centenary celebrations.

We’ll still have to wait some time to see just how much more performance is being added to the BMW i8. Expect to see either the i8S or the refreshed standard i8 in the coming months.