There is a method to the madness.

The Mercedes-Benz EQS is revealed, and it's quite the machine. From its sleek cab-forward shape to the full glass dash with three touchscreens, it's certainly something you won't mistake for pretty much anything else on the road. Some internal-combustion habits die hard, however, and by that, we mean oddly placed access doors on the exterior where you can fill the vehicle with fluids. But isn't this sucker electrical?

It certainly is, and with Mercedes giving the EQS an estimated WLTP-based range of 478 miles, it covers a very impressive distance on a single charge. That's also plenty of time for the windshield to accumulate all sorts of nasty crud, and while EV powertrains are completely different, some things never change. As such, that small door on the driver-side fender is where you fill the washer fluid tank. But here's the million-dollar question we know you're asking. Why break up the Merc's clean body lines with something as mundane and seldom-used as a windshield washer reservoir tank?

The answer is two-fold. For starters, the EQS doesn't have a front trunk. In this case, that also means it doesn't have a traditional hood to open. In general, the only time that section of the car opens up is when some deeper maintenance is required, so accessing the tank in there wasn't an option. We asked Mercedes for some additional information on this, and we were told that the fender placement for the reservoir was primarily done out of convenience. We can't really argue against that, as the door flips open for easy access, no fuss no muss.

Perhaps it could've gone in the boot, but how many times have you spilled fluid when filling it under the hood? Nothing ruins your grocery run or vacation luggage quicker than a splattering of ammonia-infused blue juice, and a fender location also keeps the tank close to the windshield, reducing the chance of a leak somewhere in the system. And it's not like the rectangular door is an eyesore – some might say it even injects a touch of character to the EQS. 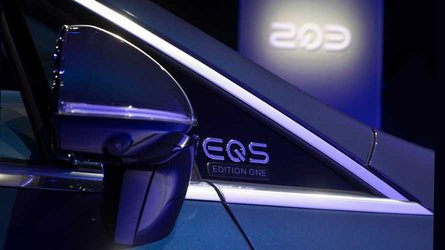 In any case, that's what the little door on the fender is for. Is it clever thinking from Mercedes, or an afterthought to fix a design flaw not realized during the development of a six-figure luxury sedan? Discuss.