We also have some fresh renders that try to digitally remove the camouflage.

July 14, 2020, was the day when BMW introduced the iX3, so why are the Bavarians in a hurry to give it a facelift? We have an idea. You see, the current-generation X3 is already approaching its fourth anniversary, and therefore it’s about to go through the typical mid-cycle update. We’ve already seen prototypes undergoing testing, some of which were actually of the newer X3 M launched two years ago.

Ok, but what does have to do with the iX3? Our thinking is BMW wants to bring the electric crossover's design in line with the conventionally powered X3. The prototype spotted this week by our spies in Sweden had those cool LED headlights we’ve seen on the traditional X3 test vehicles hiding the Life Cycle Impulse (LCI), and it appears the taillights have slightly different graphics as well.

You’ll also notice the front fender air vent looks a little bit different now and it appears to be hiding some sort of badge. It could very well be an “M” denoting the revised iX3 will be optionally offered with an M Sport Package. It would probably explain why BMW chose to fully camouflage the bumpers, with the front one seemingly carrying redesigned air intakes.

It will be interesting to see whether the iX3 LCI will come with a beefier version featuring xDrive seeing as how the current model is offered exclusively with a single motor and rear-wheel drive. The drivetrain is good for 282 horsepower and 295 pound-feet (400 Newton-meters) of torque. It does 0 to 60 mph (96 km/h) in 6.8 seconds and tops out at an electronically capped 112 mph (180 km/h).

Underneath the oh-so-familiar skin is a battery pack with a 74-kWh usable capacity granting 286 miles (460 kilometers) of range according to the WLTP testing regime. It’s too soon to say whether the facelift will bring some improvements in terms of battery, which would be necessary if there are plans for a dual-motor variant. That said, we wouldn’t hold our breath for any significant hardware changes considering the iX3 is less than a year old.

BMW is expected to roll out the X3 and X3 M facelifts later this year, with the purely electric derivative likely not far behind. In the meantime, we have some fresh renders (see above) attempting to see what that swirly camouflage is hiding. It's worth mentioning the blue iX3 is depicted with the optional M Sport Package possibly coming with the facelift. 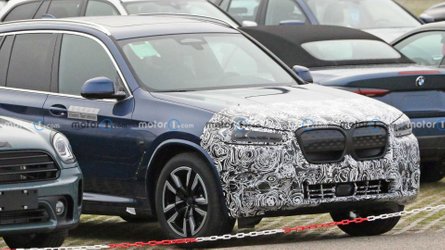 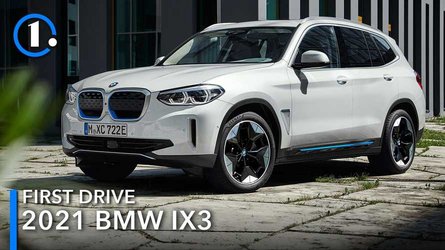