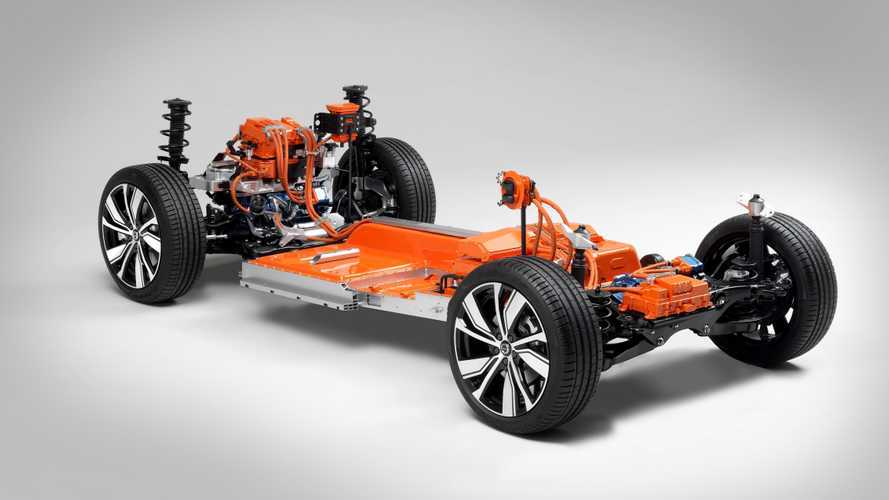 Volvo claims it's one of the safest cars ever.

Back in February 2018, Volvo announced its current generation of combustion engines would be the last one in a move to gradually shift focus to electric vehicles. The process has already started through downsizing the engines as all of the company’s production models are powered by four-cylinders, with the XC40 taking the next step by being Volvo’s first model to offer a tiny three-cylinder engine.

The small crossover will go down in history for another reason as the Swedes have chosen the XC40 to become Volvo’s very first production EV. Announced in April and teased here ahead of its October full reveal, the zero-emissions version is said to be “one of the safest [cars] on the road” thanks to a reinforced frontal structure necessary after taking out the internal combustion engine.

In addition, the battery mounted in the floor provides better protection against roll-overs as the center of gravity has been lowered. To further boost safety, the battery pack is housed within a safety cage using a frame of extruded aluminum located right in the middle of the vehicle’s body structure to form a crumple zone around the battery.

The XC40 Electric will also have a reinforced rear structure where the electric motor is going to be built into the body structure to enable a better distribution of collision forces away from the cabin in the event of a crash. In an accident, those collision forces felt by the passengers inside the cabin will be diminished, thus lowering the risks of serious injuries.

Current Volvos already have a comprehensive list of safety tech, but the XC40 Electric will raise the bar by offering newly developed Advanced Driver Assistance Systems (ADAS) encompassing radars, cameras, and ultrasonic sensors that will rely on the software created by Zenuity.

The Geely-owned marque says it will release more details about the pure electric crossover in the coming weeks, prior to a first public showing programmed for October 16. The XC40 sans a traditional engine will follow the recently launched plug-in hybrid model equipped with the T5 Twin Engine powertrain offering a combined 258 hp and 28.6 miles (46 kilometers) of electric range.

The advance of electric cars constitutes the biggest change in the history of the automobile. For the first time in over a century, cars move without a petrol or diesel engine in the engine bay and have a battery in the floor, changing the car at its core.

With the introduction of the forthcoming fully electric Volvo XC40 SUV next month, Volvo Cars is not just launching its first fully electric car – in true Volvo tradition, it is also introducing one of the safest cars on the road, despite a fresh set of challenges presented by the absence of an internal combustion engine.

“Regardless of what drives a car forward, be it an electric machine or combustion engine, a Volvo must be safe,” says Malin Ekholm, head of safety at Volvo Cars. “The fully electric XC40 will be one of the safest cars we have ever built.”

While building on the excellent safety standards of the original XC40, Volvo Cars safety engineers had to completely redesign and reinforce the frontal structure to deal with the absence of an engine, meet Volvo Cars’ high safety requirements and help keep occupants as safe as in any other Volvo.

“The fundamentals around safety are the same for this car as for any other Volvo. People are inside, and the car needs to be designed to be safe for them,” says Malin Ekholm.

To help keep passengers safe and the battery intact in the event of a collision, Volvo Cars also developed a new and unique safety structure for passengers and battery alike in the XC40. The battery is protected by a safety cage which consists of a frame of extruded aluminum and has been embedded in the middle of the car’s body structure, creating a built-in crumple zone around the battery.

The battery’s placement in the floor of the car also has the benefit of lowering the center of gravity of the car, for better protection against roll-overs.

Meanwhile, the car’s body structure has not just been reinforced in the front, but also at the rear. Here, the electric powertrain has been integrated in the body structure to realise a better distribution of collision forces away from the cabin and reduce the strain on people inside the car.

The new ADAS platform is a modern, scalable active safety system that consists of an array of radars, cameras and ultrasonic sensors. Because of its scalable nature it can easily be developed further and lays the foundation for the future introduction of autonomous drive technology.

Volvo Cars will reveal more details about the fully electric XC40 in the coming weeks, before it will be first shown to the public on October 16.