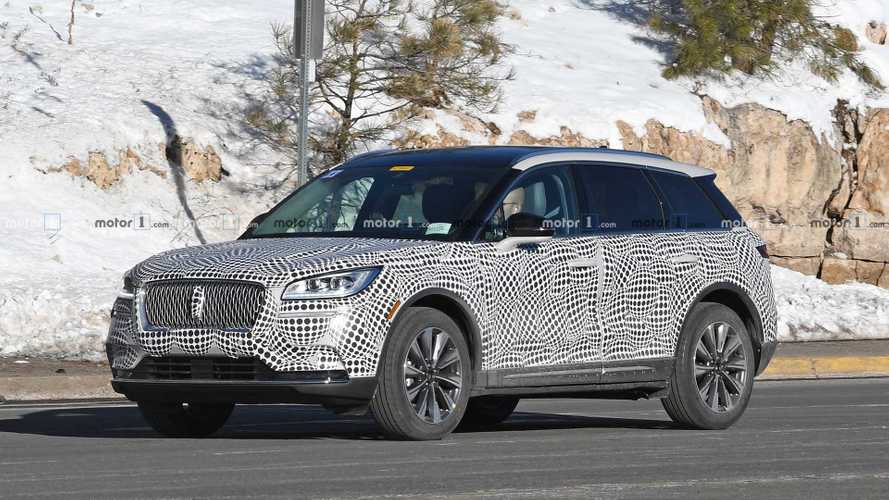 It's our best look so far at the MKC replacement.

Here’s our first good look at Lincoln’s new compact crossover, and we like what we see thus far. We’re still going with the name Corsair for this MKC replacement – we haven’t heard anything that suggests something different from the initial report, and honestly, we dig the aviation-themed moniker. One of the coolest aircraft from World War II was the Vought F4U Corsair with its unique inverted gull wing design. Wouldn’t it be insanely awesome if this Lincoln Corsair offered gullwing doors like the Tesla Model X?

Such a feature is extremely unlikely, especially since this latest batch of spy shots clearly reveals normal-looking doors. In fact, these photos nabbed of a prototype in Colorado reveal all kinds of new details, not the least of which is an overall resemblance to Lincoln’s new large SUV, the elegant Aviator. Previous photos showed a heavily camouflaged prototype with boxy proportions, but that’s all gone now. The Corsair’s sloping roof is very similar to the larger Lincoln, as is the high beltline. Up front, we see a familiar face with the grille and headlight arrangement looking quite similar to the Aviator. It’s certainly not a bad look to mimic.

We haven’t heard much about powertrain or features, though we expect to see the Corsair come standard with front-wheel drive. All-wheel drive would be optional, and power would likely come from a 2.0-liter EcoBoost mill. In the Ford Escape that engine currently produces 245 horsepower (183 kilowatts), and a hybrid offering for the Corsair is almost a certainty.

According to our sources, Lincoln’s original plan was to replace the MKC for the 2021 model year. In light of insatiable crossover sales, it seems that timetable has been bumped up considerably. We’re now expecting to see the Corsair arrive for the 2020 model year, but a specific reveal date isn’t known. However, given the minimal camouflage we see on this pre-production model, we wouldn’t be surprised to see Lincoln take flight with the Corsair very soon. The New York Auto Show in April seems like a good place to make that happen.