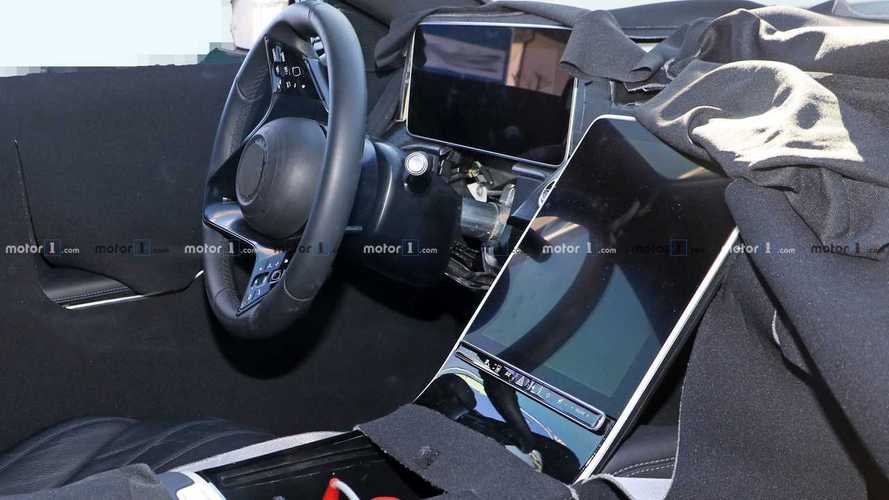 But is bigger necessarily better?

Hot on the heels of yesterday’s spy shots depicting the 2020 S-Class, our spies have now sent us something even more interesting. We’re able to take a good look inside the cabin of Mercedes’ future flagship model and its massively reworked dashboard. With the vehicle being an early prototype, it doesn’t come as a surprise the interior is a bit rough around the edges, but it’s nevertheless an excellent opportunity to see into the future of the W223.

If you feel like conventional controls are a bit old school, you’ll be happy to hear Mercedes has integrated most of the functions into a gigantic touchscreen. There’s still a separate row of buttons below the display, although even those appear to be of the touch-sensitive type. Perhaps the hazard lights button in the middle is still physical, but the others are likely touch-operated controls.

Needless to say, it’s the big screen dominating the center console that catches most of the attention. While it’s tricky to estimate its size, it’s probably a bit smaller than the 17-inch touchscreen you’ll find in the Tesla Model S. The edges of the display are pretty thick, so the actual useable screen is not as large you might think upon a quick glance.

The instrument cluster is also entirely digital, and looks to be roughly the same size as the 12.3-inch screen available in the current S-Class. Because of the generous use of cloth to mask the dashboard, we can’t see the rest of the dash, but most likely on top of the giant screen are the central air vents since there’s no place for them anywhere else. It will be interesting to see whether these vents will flank an analog clock as it’s the case with the W221 and W222.

As you may recall, it was back in May 2018 when Mercedes released some preliminary details about the cabin of its revamped S-Class. The company’s director of interior design, Hartmut Sinkwitz, hinted the W223 would draw inspiration from the Maybach Ultimate Luxury Concept, adding there’s going to be a high-tech configuration with large screens and intricate ambient lighting.

Rumored to come exclusively in long-wheelbase configuration, the Mercedes S-Class will enter production in 2020 at the new Factory 56 plant in Sindelfingen, Germany. The Maybach-branded version will eventually follow with a “next-level” suspension and it will most likely be the only V12 S-Class available.

2020 Mercedes S-Class Spotted Up Close Near The Arctic Circle