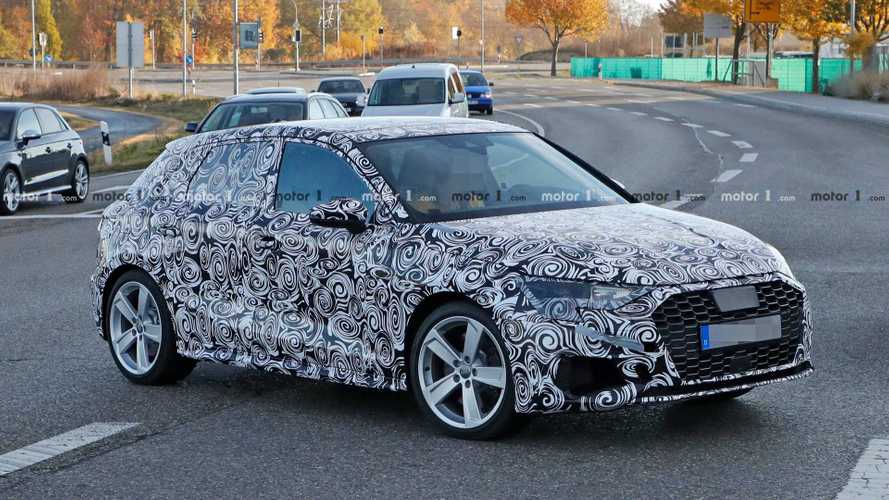 We may not see it revealed for at least another year, however.

The current Audi S3 is pretty darned good as far as cars go. Perhaps that’s why this camo-wrapped prototype doesn’t appear much different, even though we’re looking at the refreshed model. We haven’t seen this car out and about very much – in fact it’s only the second sighting since our first look in August, where we saw it with standard-issue A3 as well.

This is certainly a bit different in the world of spy photography. Usually, the base model is spotted first wearing heavy camo. As you can see from these latest shots, Audi seems to have skipped right to the waning days of secrecy with just a camo wrap and components that appear to be production ready. And unless Audi is pulling a fast one, the quad exhaust tips out the back point to this being the warmed-up S3 – a model which should debut after the new A3. Could the automaker have a surprise in store for us?

It’s not as if the camo wrap doesn’t do a good job of hiding details. We can see that the new S3’s overall shape is quite familiar, but there are some new headlights and taillights in the mix. Revisions to the front and rear fascias should also be part of the new package, and while the outside doesn’t appear to change much, we expect revisions to the MQB platform underneath will lead to a bit more room inside for people and tech upgrades.

As for power, we haven’t heard anything specific yet but there should be plug-in hybrids and full-on electric versions coming for the A3 line. The current S3 uses a turbocharged 2.0-liter engine to make 292 horsepower (218 kilowatts), so expect a carryover of that package at the very least. A hybrid system with that engine would certainly liven things up, however.

We’re also rather in the dark as to when the new A3/S3 will arrive. Considering this car looks production-spec, a reveal could be soon. Our best guess says Audi will unwrap the A3 early next year, with the S3 debuting later in 2019 or possibly early 2020.