VW up! GTI Gets 145 Horsepower Thanks To Tuner 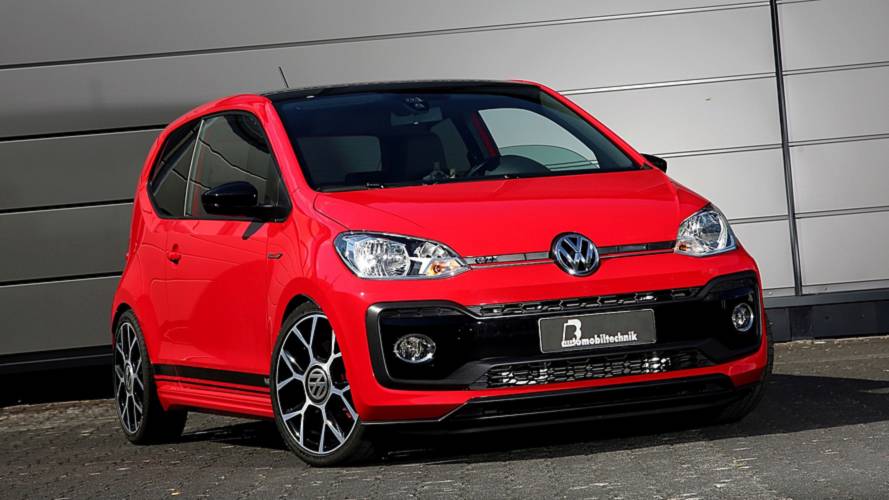 The smallest hot hatch in Volkswagen’s Grand Touring Injection portfolio, the Up! GTI, is surely no match for its larger brothers Polo GTI and Golf GTI, but is still a cute and quite a capable machine. Despite its tiny three-cylinder 1.0-liter engine, the Up! GTI reaches 62 miles per hour (100 kilometers per hour) in just 8.8 seconds. But what will happen if we add more power?

That’s probably the question the folks over at B&B Automobiltechnik have asked themselves when creating a tuning project for the vehicle from Wolfsburg. The German specialists have developed a two-stage engine program, which boosts the small car’s power output and improves its acceleration and top speed figures.

See how fast the Up! GTI is:

The Little Engine That Could: See The up! GTI Accelerate To 62 MPH
⠀

In level 1, the boost pressure is increased by approximately 0.2 bars, which results in increased output by 21 horsepower (16 kilowatts). Stage 2 brings an optimized intake and air inducts in combination with more boost pressure and the required engine map adaptation. This second level of engine tuning results in a total output of 145 hp (107 kW) and 192 pound-feet (260 Newton-meters) of torque – quite impressive figures for a car that weighs just 1,070 kilograms (2,358 pounds).

The engine improvements should make the Up! GTI significantly faster than in stock form. The 0-62 mph (0-100 kph) acceleration time is reduced to 7.9 seconds, while the top speed increases to over 130 mph (210 kph).

The keep the more powerful car calm on the road, B&B Automobiltechnik has also developed a sports suspension, which lowers it by about 30 millimeters. New adjustable coilovers should allow significantly higher cornering speeds and greater fun behind the wheel.

What makes the studio’s package even more appealing is the fact that it comes at a very reasonable price. Stage 1 engine tuning is priced at €998 (approximately $1,156 at the current exchange rates), while the more powerful stage costs €1,498 ($1,753).

VW up! with R-Line exterior package