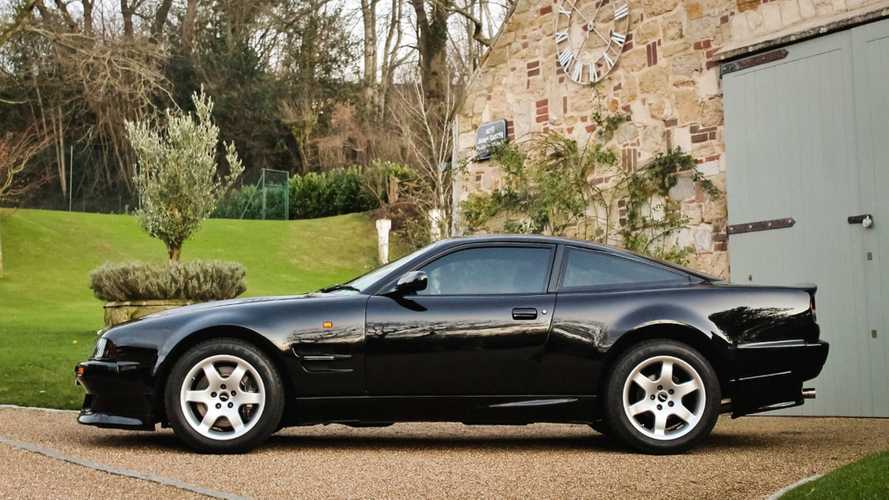 Rare 1997 V550 ordered new by rock legend is to go under hammer at Silverstone Auctions on February 24.

One of the most desirable Aston Martins of the past century is to be put under the hammer at the Silverstone Auctions Race Retro Classic Car Sale on February 24 and 25. The fact that this 1997 V8 Vantage V550 once belonged to rock and pop legend Sir Elton John makes it all the rarer.

The hand-built V8 Vantage was ordered new from the Newport Pagnell factory in 1997, and is expected to fetch over £250,000 (equivalent to about $347,500 at the current exchange rates). It may seem like a big Sacrifice to cough up that much Nikita, but this is no Candle in the Wind; it’s pure Rocket Man. It wouldn’t just be the Yellow Brick Road that you could bid goodbye, but also the rear tires when they’re churning out all 550 horsepower (410 kilowatts). It was Made in England, as well. Right, that’s enough of the puns. What about the car?

Wearing a coat of dense black paint paired with a black leather interior, the V8 Vantage can sprint from a standstill to 60 miles per hour (98 kilometers per hour) in 4.8 seconds and surpass 185 mph (290 kph) on a wave of torque. For a model of such girth, this is highly impressive. It is claimed to still hold that special new-car smell, and shows fewer than 9,000 miles (14,484 kilometers) on the odometer.

Adam Rutter, classic car specialist at Silverstone Auctions, said: "Sir Elton is a global superstar and is still making headlines around the world, so it’s a pleasure to offer for sale this Aston Martin that he ordered new back in 1997. As well as enjoying celebrity ownership, this stunning V8 Vantage has been maintained regardless of expense and has a mere 8,663 miles on the clock. That’s equivalent to being driven only about 400 miles a year."

It is thought only 240 standard V550s were ever made, making any example a must-have collector’s item – let alone one with such an iconic owner. This example’s exterior is in immaculate condition, with the deep front spoiler and flared wheelarches remaining scuff free. Vast expense has been lavished on chassis number #70174 with respected marque specialist Rikki Cann, which means it has remained in A1 condition. The original service books and invoices also accompany the car.

Forget about Stepping into Christmas – step into the cabin and perform a few Circles of Life. You certainly wouldn’t Still be Standing, except maybe at the gas pump. Sorry…

Adam added: "Our Race Retro auction is a rare opportunity to own one of the last coach-built Aston Martins. If that wasn’t enough, then throw in the fact it was ordered new by Sir Elton John, and you have a truly special car."

You can find out more about this V8 Vantage V550 and the Silverstone Auctions Race Retro Classic Car Sale, taking place at Stoneleigh Park in Warwickshire, on the official auction website. Don’t Let the Sun Go Down on such an opportunity. Enough.