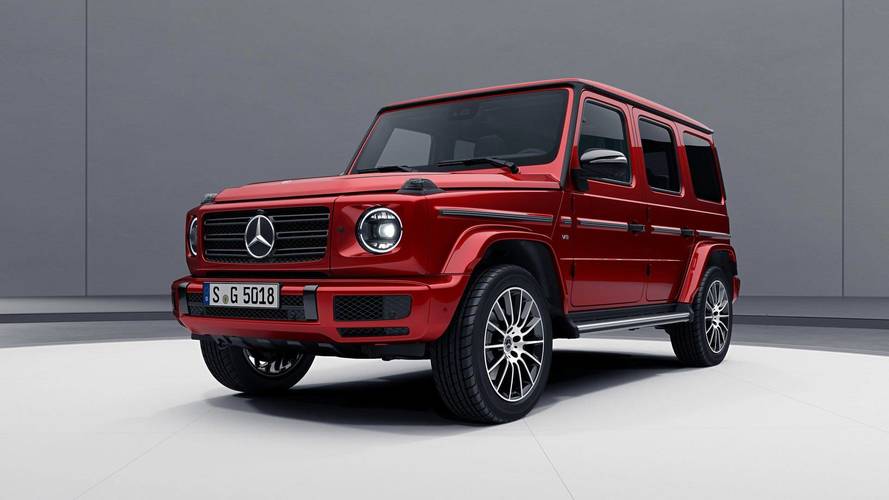 Oddly, this equipment isn't available on the SUV in black.

Mercedes as released copious photos of the 2019 G-Class, but until now the company has only photographed the SUV in a variety of dark colors. New shots of the optional Night Package let us see the new model in a brighter shade for the first time. It turns out the G-Class wears red quite well.

The Night Package fits the SUV with dark-tinted parts for the turn signals, taillights, and headlights. There's also tinted glass for the cabin windows. Obsidian Black trim decorates the grille's slats, small vertical sections of the bumpers, side mirror housings, and the surround for the spare tire carrier at the rear. The accents running up the A-pillars and around the roof have a matching look, too. These models ride on 20-inch multi-spoke wheels with dark details.

In Germany, the Night Package will only be available with the AMG Line. According to Mbpassion, the equipment won't be possible to get on a black G-Class, either. This seems like an odd decision because many buyers would probably want such a dark appearance for their new SUV.

The 2019 G-Class will go on sale in the United States in late 2018, and the company will announce more about pricing and options closer to launch. At first, only the G550 with the 4.0-liter biturbo V8 will be available, and it'll make 416 horsepower (310 kilowatts) and 450 pound-feet (610 Newton-meters). The only gearbox choice will be a nine-speed automatic, and sophisticated all-wheel-drive system will feature three, driver-controllable locking differentials. More powerful AMG variants will come later.

Drivers will also be able to select from two dashboard layouts. The standard setup will feature analog instruments and a 12.3-inch infotainment system. Customers will be able to upgrade to an optional two-screen layout with a pair of these large displays.