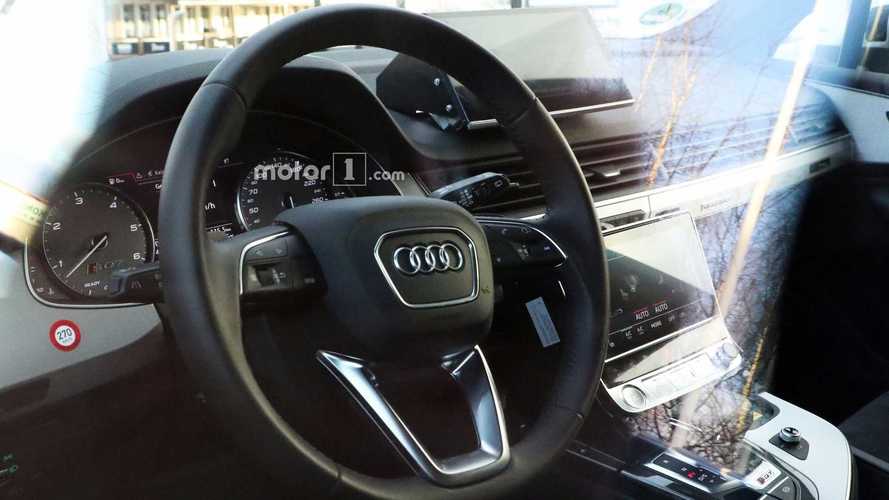 The top dog in Audi's growing SUV family reveals some of its secrets.

Much like BMW is adding 1 to the 7 Series fullsize sedan to bring back the 8 Series coupe, Audi is doing the same to its large Q7 SUV to create the first-ever Q8. Previewed a couple of times already, the imposing coupe-SUV was seen the other day flexing its Ingolstadt-developed muscles on the Nürburgring. While there’s nothing new to report about the exterior, some of the adjacent spy shots are showing the work-in-progress interior for the first time.

The cabin has been largely carried over from the Q7, specifically from the torquetastic SQ7 range topper, but there are some changes denoting we’re dealing with the new Q8. The most obvious novelty is the touchscreen mounted lower on the center console providing access to the HVAC controls. If the display seems familiar, that’s because the Q8 Concept as well as the Q8 Sport Concept both had a similar setup. It’s a clear sign the secondary touch panel will make the transition from the two showcars to the road-going model. One could speculate the all-new A8 flagship coming later this year will also have it.

Getting back to the prototype at hand, the upper touchscreen for the MMI infotainment system was simply screwed onto the top of the dashboard, but that was obviously a provisional setup. The final version of the Audi Q8 will likely have the screen neatly integrated in the dash as it was the case with the two aforementioned concepts.

In addition, those analog dials with the “SQ7” lettering will be replaced by the fancy Audi Virtual Cockpit, which chances are is going to come as standard equipment. Speaking of the all-digital instrument cluster, the overhauled A8 will employ the second generation of the technology, so it wouldn’t be too far-fetched to assume the Q8 will feature the new system as well.

Also sourced from the SQ7 is the steering wheel and the continuous vent design of the dashboard, but these will change on the production model, as will many of the other bits and bobs inside the cabin. As a matter of fact, the entire dashboard will be replaced and that secondary touchscreen we were talking about earlier will be built into the dash rather than sticking out as it does on this test vehicle.

Audi has made the promise to launch the Q8 in 2018 and will offer the model with the company’s high-end engines. Further down the line, a hotter SQ8 and/or a full-blown RS Q8 could join the lineup.