What our past selves thought the future would look like.

Built with lots of AMC Gremlin and Hornet parts, the 1971 Jeep Cowboy concept was an almost-ran rival to the decade’s incoming Toyota and Datsun compact pickups. AMC’s 3.8-liter and 4.2-liter inline-six engines would have given the Cowboy quite a bit more power and torque than similarly sized trucks, and its coupe-utility styling (like the Ford Ranchero and Chevy El Camino) would have suited the decade’s tastes well. Built to a price, the Cowboy’s separate bed and parts-bin construction helped reduce costs. Ultimately, however, the brand went a different direction, offering the CJ-8 Scrambler minitruck instead. 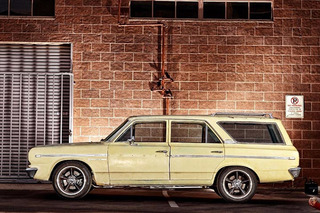 Sleeper Alert: This AMC Rambler Wagon Has a V8 Surprise
⠀

This Awesome AMC Javelin Is A Custom-Built 1,100-HP Dream Machine

The Chevrolet XT-2 looks like the consequence of a one-night stand between an F-body Camaro and an El Camino. Built to pace CART PPG IndyCar races, the XT-2 is powered by a 4.5-liter V6 similar to the one found in the Trans Am racing series, prepped to the tune of 360 horsepower (268 kilowatts). Its canopy-like windshield, vertical door handles, and flying-buttress bedsides look for all the world like a futuristic El Camino successor, but the funky pickup remained a one-off. 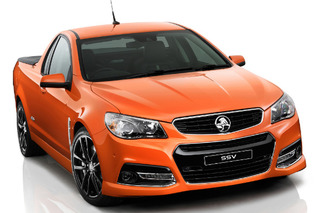 Based on a shortened version of the contemporary F-350’s dual-rear-wheel chassis, the 1994 Ford Power Stroke concept served as a high-profile pedestal upon which the company displayed its eponymous new turbodiesel engine. The concept’s direct-injected 7.3-liter V8 soon made its way into production-spec F-250 and F-350 pickups, and it still enjoys a sterling reputation for longevity and capability. The Power Stroke concept also previewed the styling of the 1997 Ford F-150, all curves and bubbles and ovoid accents.

Based on the recently introduced Dodge Ram 3500, the T-Rex boasted dual rear axles and six-wheel drive nearly two decades before the Mercedes-Benz G63 AMG 6x6 did it. A production-spec 8.0-liter V10 engine powered the truck down the road, courtesy of 497 horsepower and 593 pound-feet. A conventional transfer case sent 52 percent of the engine’s power rearward to a secondary transfer case, which doled out the twist equally between the two rear axles.

Six Is Better Than Four:

The 1996 Ford Adrenalin concept served as an amuse bouche, of sorts, for the 2001 Explorer Sport Trac production vehicle. With four full doors and a smallish, sub–F-150 stature, the Adrenalin also previewed the truck market’s migration toward passenger comfort rather than outright capability. Its connection to the Sport Trac is plainly obvious in the styling of the rear end, but unlike the production vehicle, the Adrenalin concept also offered a retractable rear window and folding rear bulkhead, expanding cargo space beyond the bed. Chevrolet’s Avalanche would offer a similar feature when it arrived for 2002.

The serpentine Dodge Dakota Sidewinder made its formal debut at the 1997 SEMA Show, slithering into the dreams of sport truck enthusiasts thanks to the Viper GTS-R’s 640-horsepower 8.0-liter V10 found under the hood. Mated to a four-speed automatic, Dodge claimed the V10 could sprint to 60 in 3.9 seconds, numbers that would shame a contemporary Lamborghini Diablo. The Sidewinder’s heavily modified Dakota bodywork also set hearts ablaze, with frenched headlights, a stepside bed, and chopped windshield cashing in on the retro craze early.

One of the oddballs on this list, the Honda Spocket was introduced at the 1999 Tokyo International Motor Show. Removable rear seats and a reconfigurable bulkhead turned the subcompact coupe into a pickup, with cargo access via a tailgate ramp. A through-the-road hybrid system, with a gas engine powering the front wheels and electric motors powering the rear, gave the Spocket all-wheel drive. It might have made for a fun little roadgoing rally car if it had been produced.

It’s hard to remember a time without the full-size Ram Power Wagon off-road pickup, but such a world existed 20 years ago. Keen to capitalize on the Dodge Ram’s popularity and the company’s history building off-road and military pickups, DaimlerChrysler built the Power Wagon concept in 1999, giving it slightly neoclassic styling, 35-inch tires, and a massive 7.2-liter turbodiesel inline-six. While the design of the concept remained a one-off, the company put the off-road ethos back into production with the 2005 Ram 2500 Power Wagon.

The GMC Terradyne’s almost-cabover proportions gave this truck impressive interior space for an extended cab, with cantilevered “sliding” doors easing entry and exit. Four-wheel steering, which would preview GM’s Quadrasteer system that came two years later, improved maneuverability in tight spaces, and a Duramax turbodiesel V8 produced in excess of 700 lb-ft of torque. A drawer-style bed extended from 6 feet to 8 feet, and a 110-volt outlet was hooked up to a 5,000-watt generator.

Squint a little and you’ll see the resemblance between the Nissan Alpha-T concept and the production 2004 Titan. Its swooping greenhouse, glowering headlights, and multiple cargo bed tie downs made the jump to Nissan’s first fullsize truck. Otherwise, the Alpha-T is pure showcar insanity. The massive tailgate swings down nearly to the ground on a cantilever, and the bed floor slides out for easier loading and unloading. Longitudinal moonroof panels (like those seen on the later Quest minivan and Maxima sedan) and orange leather kept the Alpha-T firmly mounted in early-2000s fashions.

Given this Nissan concept’s extravagant styling, color, and unusual bed stakes, we’re not sure if the “Nails” name refers to building materials or manicures. However, for all its unusual and decidedly un-trucky styling, the Nissan Nails is actually pretty robust, with dent- and scratch-resistant body panels, an easy-to-load low bed floor, and front-wheel drive. It might have been a perfect low-cost pickup for delivery drivers or skilled trade workers. 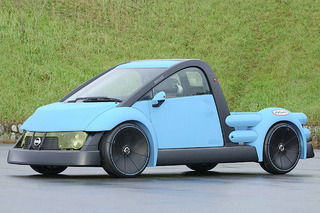 This Nissan Concept is the Coolest Truck that Nobody Would Buy

Today, compact pickups are a thing of the past, with even the smallest trucks occupying the same footprint as their full-size forebears from two decades ago. The Dodge M80 would have helped reestablish the compact truck’s place in the market, thanks to fantastic retro styling and simple mechanicals. A 3.7-liter V6 and five-speed manual gearbox joined a four-wheel-drive transfer case, borrowing heavily from the contemporary Dakota pickup.

With its namesake’s signature yellow paint, the Ford Mighty F-350 Tonka concept stood out – figuratively and literally – from the crowd at the 2002 North American International Auto Show. The Tonka previewed the next development of F-Series Super Duty trucks via its 6.0-liter Power Stroke turbodiesel V8, chrome-heavy front end, and striplike dual-rear-wheel fenders. Some of the Tonka’s other features were ripped right from a long-haul truck, including a floating suspension driver’s seat.

Watching Restoration Of This 60-Year-Old Tonka Trunk Is Mesmerizing

As pickups began to rival minivans as family transportation, Dodge attempted to meld the two back in 2006. The Rampage, which borrows its name from a unibody coupe-utility pickup from the 1980s, featured sliding doors, front-wheel drive, and Stow-n-Go seating, like a traditional Dodge minivan. However, its pickup-style body and 5.7-liter Hemi V8 made the Rampage far more muscular than the dad-bod Grand Caravan.

Somehow, the 2006 Ford Super Chief presaged what a Super Duty would look like more than a decade later. The Super Chief’s smooth styling, horizontal door handles, massive fender vents, and vertical headlights look very similar to what the world would see on the 2017 Super Duty. A supercharged V10 engine that runs on gasoline, E85, or hydrogen is firmly rooted in science fiction, however.

Like the Dodge Rampage, the Toyota A-BAT features unibody construction and a greater emphasis on passenger comfort than outright ruggedness. A four-cylinder Hybrid Synergy Drive powerplant and solar panels are features we’ve yet to see on a truck, and the A-BAT’s 4-foot bed and lack of a low-range transfer case underscore its lack of capability relative to other pickups. Its four-passenger interior was fresh and modern though, with onboard battery packs to charge devices and power campsite equipment.

The Ram brand’s innovative Mega Cab passenger cabin was never offered with an eight-foot bed, but the truckmaker rectified that issue with the hilariously massive 5500 Long Hauler concept. And because too much is never enough, Ram also sandwiched an auxiliary fuel tank between the cab and cargo box. The result was a total fuel capacity of 170 gallons, good for a highway range of more than 2,000 miles. The Long Hauler, while never produced, was intended to stoke the interests of folks who regularly spend their days out on the open road. Its long wheelbase and massive range would have made it a perfect medium-duty trailer master.

On The Road Again:

UFO Spotted Driving Down Highway Proves The Truth Is Out There

Before the 2020 Gladiator hit the market, Jeep teased the world with several different pickup concepts. Our favorite could be the Mighty FC, a Wrangler-based truck that aped the legendary Jeep Forward Control of the 1950s and 1960s. The Wrangler cabin was mounted over Mopar accessory front and rear portal axles, giving the Mighty FC plenty of ground clearance and a stout stance. We love it.

The 2014 Volkswagen Tristar concept was built to preview the then-new sixth-generation Transporter van, and it was powered by a 2.0-liter TDI diesel engine mated to a dual-clutch gearbox and 4Motion all-wheel drive. A 1.2-inch suspension lift and knobbly BFGoodrich All-Terrain T/A tires establish the van-truck’s mission as a rough-road master. Alas, the Tristar never came to be, and Americans were denied the Germanic Transporter too.

With a center-mounted driver’s seat and miniscule proportions, the 2017 Yamaha Cross Hub is a pretty interesting small pickup. Its 1+2+1 seating arrangement was actually surprisingly spacious given the concept’s 177-inch overall length, and the bed was long enough for one or two motocross bikes. This four-wheeled Yamaha concept wasn’t the first, and it certainly wasn’t earmarked for production, but it’s nevertheless a clever example of space efficiency and unique design.

The humble pickup truck has been one of America’s best-selling vehicles for decades now, and each passing year brings us new developments that improve both comfort and utility. Part and parcel to those improvements are the concept trucks that presaged them.

Just as with concept cars, some of the 20 trucks that appear on this list are barely disguised previews of production vehicles, some are wild designs that hide marketable new features, and some are utter flights of fancy. If you could have one of these cool pickup concepts in your garage, which would it be?

Relics From Another Time: