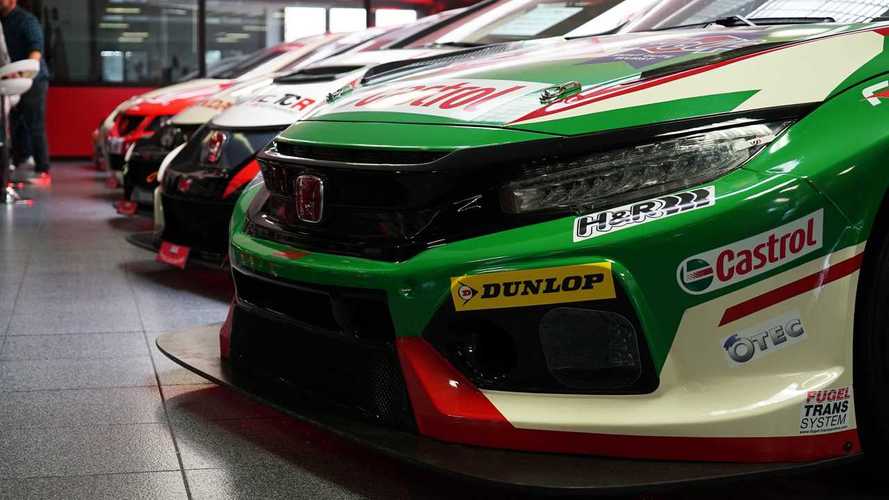 We took a tour of Honda’s racing factory in northern Italy.

As a brand often associated with reliable, practical cars, and family crossovers, it’s easy to forget that Honda traces its roots back to the race track. Honda Performance Development (HPD) serves as the epicenter for all things Honda and Acura racing. HPD’s mission is to interact with drivers at a young age, and ideally, support them in Honda racing products well into their careers. An integral part of this process is the Civic racing program, which includes the Type R TCR – a turn-key race car ready to compete in series across the globe.

Strangely enough, Honda doesn’t build Civic race cars at its California racing HQ. Nor does the company make them in Japan, Ohio, or even England where it makes the Type R street car. Rather, the race-spec Civics are assembled in a sleepy town roughly 30 minutes outside of Milan, Italy. It’s here that J.A.S. Motorsports – Honda’s long-time partner for racing initiatives – assembles the Civics by hand in an extremely intricate process. After seeing the TCR Civic race at Daytona, we toured the tiny Italian factory to see first-hand how a Civic becomes a $170,000 race car.

A Civic At Heart… But That’s About It

Before assembly at J.A.S, the Civic TCR racer starts life alongside its road-going cousin in the United Kingdom. This is the only step in the production process where the two cars share the same location. Honda assembles the car’s frame and adds a coat of primer, then sends a small allotment to Italy, where they start their journey of becoming race cars.

As you’d expect, the TCR racer is made up mostly of race-specific components, although it shares some parts with the street car. This includes the aforementioned frame, the engine block, exterior lighting, and several body panels. Beyond that, the folks at J.A.S drastically alter the Civic to race, in a process that typically takes about 12 days to complete. A J.A.S. representative says the factory has produced up to eight examples of the TCR in one month, but their preference is to build between three and six in that timeframe to keep quality control high. From the initial assembly phase to the final shakedown run, the TCR gets over 300 hours of attention from engineers before completion, customizing the car depending on customer needs.

Lining up the street car next to the race car shows how drastically different the TCR’s shape is, with its extra-wide composite bodykit and massive adjustable front splitter. The upgrades go way beyond aesthetics, though. J.A.S. takes delivery of the Civic Type R crate motor separate from the car’s frame and goes to work enhancing the four-cylinder for more power. In TCR spec, the 2.0-liter engine makes 340 horsepower, up from the street car’s 306. This power bump comes with custom engine mapping for 100 octane racing fuel, upgraded intercooler, and custom stainless steel exhaust.

That extra power goes to the front axle via a six-speed sequential paddle-shift gearbox, which replaces the Type R’s manual transmission. Other major tweaks include 18-inch O.Z. lightweight wheels, and custom coilover suspension with adjustable anti-roll bars. The brakes are also upgraded, with new six-piston front and two-piston rear calipers with steel discs at all four corners.

The TCR’s interior goes through a significant lightweighting process, negating most of the sound deadening found in the road car. There’s a huge roll cage, one composite racing seat, and a quick-release racing-spec steering wheel. The street car’s gauge cluster gets traded out for a multi-function display that rests right above the steering column. J.A.S. can also accommodate custom touches for the customer, like a water drinking system or special paintwork.

According to J.A.S., the most important steps come just after assembly is completed. During this phase, customers fly in from all over the world for the chance to test their customized race car on-track, sometimes just for a few laps. This final shakedown is perhaps the most pivotal part of the process, ensuring that everything is to the customer’s liking and properly calibrated per the series the car will compete in.

Upon leaving the factory, the TCR functions as a race car, but also a data mine for both HPD and J.A.S. Collectively, the two parties harvest the data from every race and, according to HPD, “may provide possible improvements to future production car designs.” This fact alone confirms what so many forget about Honda: racing might not be the brand’s headline talent, but it is deeply ingrained into the company’s DNA.