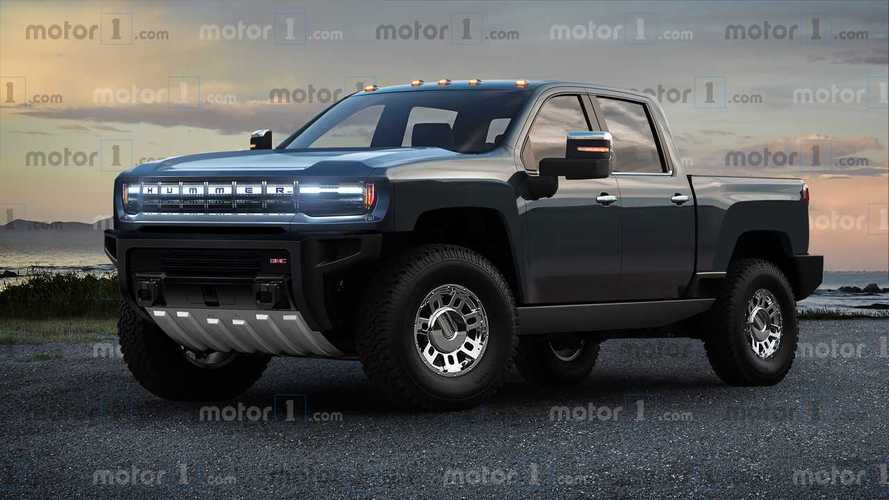 This is what we think GM's first electric pickup truck will look like, plus the rest of what we know and rumors we've heard.

Hummer revival rumors have been swirling since 2014. Seriously. But following a not-so-brief nine-year hiatus, the iconic SUV nameplate finally returns – this time in the form of a GMC-badged, fully electric truck. Unfortunately, we don't know all the details yet as the company is keeping some key facts under cover until the Hummer's official debut. But there are a few key points you should know.

We know that the GMC Hummer EV will have more than 1,000 horsepower (745 kilowatts) and a reported 11,500 pound-feet (15,590 Newton-meters) of axle torque. That means the truck should be able to hit 60 miles per hour in about 3.0 seconds. The new Hummer also promises to be on- and off-road-ready, as well as built here in the U.S. The EV will call GM's Detroit-Hamtramck assembly plant home.

If the namesake isn't self-explanatory, this is GM's revival attempt of the Hummer brand in an effort to cash in on that sweet, sweet nostalgia. Only this time the name Hummer succeeds GMC branding, and rather than a brawny V8 underhood, this version uses a battery pack(s) instead.

GMC promises a "truck." But whether that means a brawny SUV-type vehicle, a traditional pickup, or something in-between (please be the Hummer HX concept) remains unclear. A teaser video released by GMC at the end of April (below) seems to show a traditional quad-cab pickup with four doors and a short bed. It might also have a glass roof option, but we know it will have a removable roof option, as GM revealed this feature at a media EV event in early March 2020.

We also know it will be capable both on the road and off of it, like most GMC products. And with GMC ensuring a rugged AT4 option for every vehicle in its lineup, an even tougher Hummer is entirely possible.

Our only detailed glimpse at the new Hummer comes by way of the lone teaser image pictured above. GMC released that image ahead of the Super Bowl, and in it, we see a six-slat grille (like ones on the H2 and H3) with each letter of the word "HUMMER" emblazoned within it. The grille itself is illuminated, and blends with the squared LED headlights.

Lower down on the image there's a large vent opening, a "GMC" badge located top right, and a strong set of front fenders flares. We assume a skid plate is also hiding underneath those elements. There are also some unique lighting elements, both on the hood and roof, that are distinguishable within the image.

For the time being, we've rendered our own guess at what the front end of the Hummer EV and its body may look like. We've imagined something that's akin to a Hummer truck with GMC styling cues, wearing the face that's visible in the official teaser.

Sorry, Hummer faithful, this one won't have a V8. GMC's Hummer will be fully electric and offer as much as 1,000 horsepower and 11,500 pound-feet of axle torque (that number is a bit misleading, but that's what the company is quoting). Utilizing up to three electric motors with various drive modes, GMC says the Hummer EV should be able to hit 60 miles per hour (96 kilometers per hour) in just 3.0 seconds. That's considerably quicker than the original HumVee ever was, and it will even compete with many modern supercars.

Hummer EV Will Have A Targa Top, New Battery Tech

We have some information on the advanced battery tech supplying all this power. The GMC Hummer will get newly developed batteries called Ultimum, which for this application will feature an 800-volt pack with charging speeds up to 350 kilowatts. GMC still hasn't offered specifics on what that means for range or recharging time, but all indications are it should be at least competitive with other EV trucks.

GMC provided no clues as to how much the Hummer EV might cost. But let's speculate. The upcoming Rivian R1T pickup will cost less than $69,000. The Tesla Cybertruck will be a bit more affordable, asking near $40,000. And the current gas-powered GMC Sierra pickup costs about $30,000 to start but goes as high as $54,700 for the fancier Denali model.

A safe estimate would put the GMC Hummer EV at about $70,000. Considering GMC is the world's "only premium truck brand," expect a premium price tag. Denali and AT4 models (if they happen) would probably be a bit more expensive.

GMC first teased the Hummer during the 2020 Super Bowl, and a reveal date of May 20 was planned. However, the global Coronavirus pandemic prompted GMC to indefinitely delay the Hummer EV's debut. The automaker says development is unaffected, which means it should still be ready to go on sale in late 2021 as a 2022 model.