They Built Buicks In Switzerland? 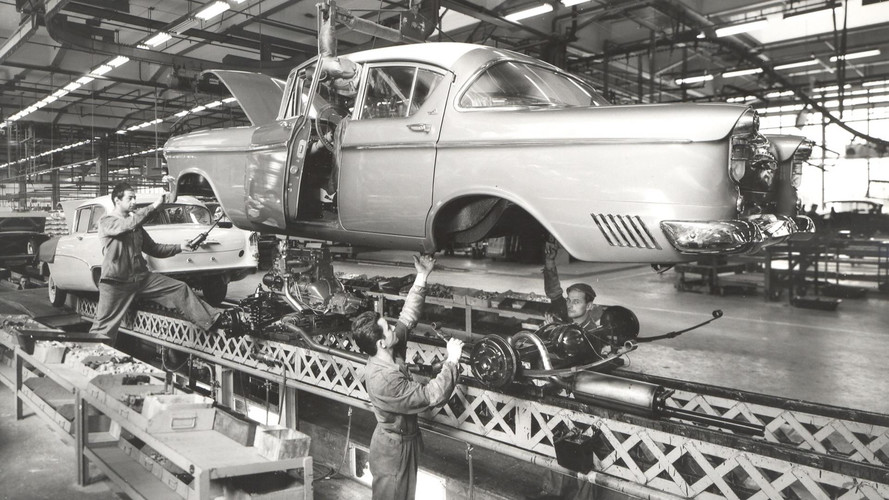 The little-told tale of how General Motors sold Swiss-made cars for 40 years.

General Motors ended all aspirations of being a volume player in Europe when it announced the sale of its Opel and Vauxhall divisions to Peugeot in March. In brighter times, GM operated production sites in several European countries including Belgium, France, Denmark, and even Switzerland, a nation better known for exporting guards to Vatican City than cars. It’s a story that few Americans remember, if they’ve ever heard it at all.

The GM factory in Bienne, Switzerland, was hailed as a win-win arrangement for both parties. On one hand, the Swiss economy was in bad shape in the early 1930s. Unemployment reached unprecedented levels in some parts of the nation, leading decision-makers to encourage companies to produce locally. On the other hand, Alfred P. Sloan’s book My Years with General Motors notes Vauxhall and Opel sales were greater in 1933 than sales of American-made cars abroad, so it made sense to invest in additional local production facilities. It’s in this context that a delegation which included Edward Riley, the general director of GM’s European division, flew to Switzerland in search of a place to build a new factory to help supply the Euro market.

The group turned a Geneva hotel into its temporary headquarters, and visited several potential sites scattered across the small, landlocked country. One night, Riley got a phone call from one of Bienne’s top officials. “Bienne needs your factory,” the man said in a broken English. “We have a few abandoned warehouses you can turn into a factory. If that won’t work, we’ll build a factory to your exact specifications at no cost to you,” he added, according to Opel’s archives department.

Bienne wasn’t on Riley’s radar up until that point, but the offer was too good to pass up. Riley and his team visited the site in the fall of 1934. They noted the buildings referred to in the phone conversation were ill-suited to auto manufacturing, but they liked the 325,000-square-foot parcel of land and its proximity to the local train station. The search was over: GM had found its Swiss home.

Funding the construction of a car factory was easier said than done for a city in dire financial straits. An article published in issue number 193 of Alt-Opel Club’s magazine states the local government needed to borrow about two million Swiss Francs, so it held a public referendum before committing such a large amount of taxpayer money. 5,000 citizens approved the project, and just 200 voted no.

General Motors Switzerland SA was founded on May 2, 1935. Construction advanced at a rapid pace, and the first car – a Buick Series 41 – rolled out of the Bienne factory on February 5, 1936. City officials kept their promise of funding the factory on their own. GM made small rent payments, and it benefitted from tax breaks during its first five years in Switzerland.

Some 969 cars were built in 1936. Chevrolet and Opel represented 321 and 318 units, respectively. The remaining volume was split between Buick, Oldsmobile, La Salle, and Vauxhall. Some bits and pieces were shipped over from the United States, including body panels and mechanical parts. Other components were sourced locally. Headlight lenses came from a company in Geneva, batteries came from the Vaud canton, glass came from a firm in Lausanne, and the clocks were Swiss-made, too – why wouldn’t a Swiss car have a Swiss clock?

World War II had a devastating effect on Europe, and the General’s Swiss arm wasn’t spared. Just 979 cars were built in 1940, including six Cadillacs. That figure dropped to 98 cars in 1941.

Not a single car was built in Bienne between 1942 and 1945, but that doesn’t mean the factory was idle. Chevrolet limousines assembled before the war were converted into pickup trucks by cutting out the sheet metal above the beltline. The Red Cross rented part of the factory, while the remaining workers helped support the war effort – Switzerland was neutral, and it was never attacked, but it mobilized up to 850,000 men and women at the height of the conflict. The upholstery department made bags for soldiers, the welding department put together ammunition cases, and some workers even repaired train cars.

Back in Detroit, GM’s top brass was worried about what the group’s overseas operations would look like after the war. Production started up slowly; 482 cars – mostly Vauxhalls and 12 Pontiacs – were built in 1946. Demand for private cars picked up at an impressive pace, however, and production grew every year until 1950. It was during that time period that the company began exporting Swiss-built cars to Austria, Italy, and Yugoslavia.

In 1947, GM bought the Bienne facility from the city and began restoring it. In 1949, it built tennis courts and a soccer field for its employees to enjoy. As production grew, the number of workers ballooned from a few hundred in the pre-war era to over a thousand.

The 1950s were the factory’s most diverse years. Bienne largely built Chevrolet, Vauxhall, and Opel models, but it also manufactured a few hundred Buick, Pontiac, and Oldsmobile cars each year. Most models were identical to their American-spec counterparts save for the parts sourced locally, but the Bienne operation did create a few market-specific cars.

GM invested $6 million into expanding the Bienne factory between 1955 and 1957, and production reached 12,484 units the following year.

Louis F. Fourie’s book On a Global Mission: The Automobiles of General Motors International points out Basel-based coachbuilder Reinbolt & Christé built convertibles based on Chevrolet and Buick chassis sourced from Bienne. In the late 1930s, the Swiss army needed an open-top four-door car that could seat six, and that was economical to run. Bienne chopped the roof off a Chevrolet sedan and dropped an Opel-sourced 2.5-liter straight-six engine between the fenders. The engine option was offered to private buyers up until 1953.

GM invested $6 million into expanding the Bienne factory between 1955 and 1957, and production reached 12,484 units the following year. Most cars remained on the Swiss market.

The selection of models built in Bienne became markedly less diverse during the 1960s. The factory stopped assembling Oldsmobile, Buick, and Pontiac models to concentrate on Chevrolet, Opel, and Vauxhall. Notably, the Chevy II, the Corvair, the Camaro, and the Chevelle were all built in Switzerland, albeit in small numbers. However, selling relatively big, fuel-thirsty cars in a market dominated by compact, more efficient machines was difficult, and GM decided to stop building Chevrolets in Bienne in 1968.

Focusing on Opel and Vauxhall paid off, at least in the short run. The factory’s best year was 1969, when it built 18,265 cars. But massive quality issues with British-built Vauxhall models damaged the company’s reputation in the late 1960s.

Switzerland signed a free-trade agreement with the European Economic Community (EEC) in 1972. The nation had to align its tariffs with other EEC members, including France and Germany. For GM, that was the beginning of the end of its Swiss operation. The low tariffs on imported parts were what made manufacturing cars locally possible. Without them, every car that came out of the Bienne factory became outlandishly expensive.

On August 15, 1975, an Opel Rekord Caravan drove off the assembly line in Bienne. It was the last of 329,864 GM cars built in Switzerland. The factory buildings were sold to various companies, including supermarket brand Coop, the Swiss postal service, and an Opel dealer in the area. GM used the office buildings as its Swiss headquarters until it moved to Glattpark on the outskirts of Zürich in 2004.