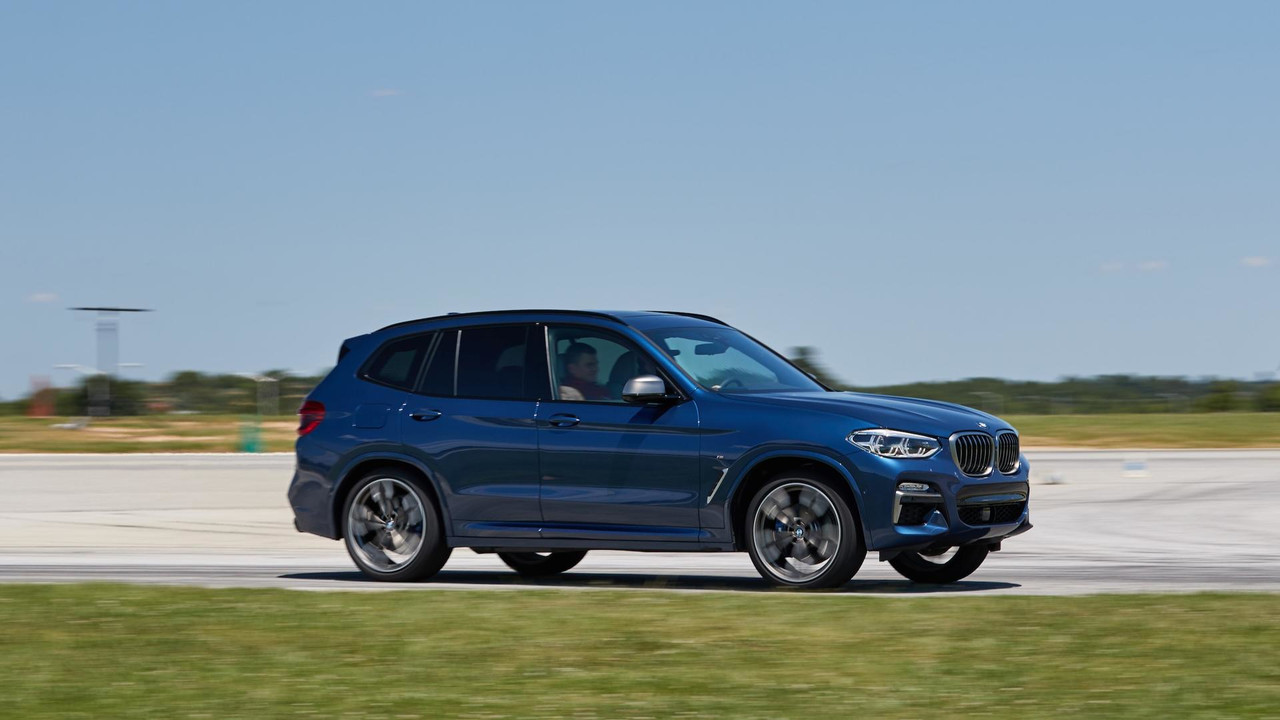 The first-ever M Performance version of the X3 makes a strong first impression.

Derek Leonard has worked as a driving instructor at the BMW Performance Center for seven years, so he’s pretty well acquainted with the test track. But he hasn’t had much time behind the wheel of the all-new 2018 BMW X3. In fact, he and his fellow instructors only got in the new M40i variant half an hour or so before I showed up after seeing the X3 introduced across the street at the Plant Spartanburg factory.

Nonetheless, Leonard cracks big smiles as he takes me and other journalists out for thrill rides around the track at a spirited pace. He revs the engine to make the exhaust crackle, hammers the throttle from a stop, and overall puts the SUV through its paces on the short, winding circuit. I wish I could get behind the wheel, but it’s still a good introduction to the dynamism that will be offered from the newest BMW crossover when the X3 M40i goes on sale this fall.

Riding on the CLAR modular platform shared with the 5 Series, the 2018 BMW X3 is larger and more spacious than its predecessor, but lighter and more aerodynamic. With the wheelbase increased by 2.2 inches, legroom increases in both rows of seats; BMW X3 project manager Arno Keller says there’s now more interior room than the first-generation BMW X5. Using aluminum for the front doors, hood, engine, and suspension helps make the new X3 around 121 pounds lighter than before (the base xDrive30i scales at 4,156 pounds).

It cuts through the wind more cleanly, too, thanks in part to the addition of active grille shutters and BMW’s Air Curtain fender cut-outs for the first time. The standard X3 has a 0.29 drag coefficient, with the M40i’s more aggressive bodywork dialing that up to 0.33. But both are lower than the outgoing X3’s 0.36 Cd, and Keller says, “We don’t have any competitors with a value like that.” That should help the all-important fuel-economy figures, for which estimates are not yet available.

The 3.0-liter turbocharged inline-six in the M40i produces a healthy 355 horsepower and 369 pound-feet of torque. That’s the same amount of power but an extra 23 pound-feet versus the X4 M40i; the two sporty crossovers may have the same suffix, but the X4 uses the older N-series 3.0-liter engine instead of the X3’s new B-series mill, and is not on the new CLAR platform.

When Leonard launches the X3 M40i from a stop, there’s a big pause while the turbo awakes then a flat, deliberate wave of torque. BMW’s 4.6-second 0-to-60-mph estimate seems perfectly attainable. The eight-speed automatic responds quickly and crisply to Leonard’s tugs on the paddle shifters, and the exhaust note – at least in Sport Plus mode – is appropriately rorty. Yes, it crackles and burbles on overrun, because engineers specifically tuned the inline-six to misfire one cylinder and make those sounds.

“To these customers, you want to have the sound experience,” Keller says of M40i buyers.

It sticks well through bends, too, with firmly controlled body motions and little roll as Leonard pitches the car around the test track. Compared to the base X3, the M40i gets extra front chassis bracing, more rear bias for the standard all-wheel-drive system, and retuned sports suspension with adaptive dampers. Nineteen-inch wheels are standard, but the cars tested here wear optional 21-inchers with Pirelli PZero rubber (18s are standard on the regular X3). The brake rotors are enlarged by 0.7 inch front and 0.5 inch in back, with the M division’s signature blue-painted calipers.

Step back and look at more practical touches, and the 2018 X3 makes plenty of big leaps forward. A power liftgate is standard for the first time, for instance, and the second-row seats now recline. It’s easy to drop the 40/20/40-split rear seats thanks to handles in the cargo area, and there’s a larger underfloor storage area – with a trunk floor supported by a small gas strut so you don’t have to hold the cover while putting stuff there.

Detailing and materials choices are lovely throughout, though of course the cars on display are highly optioned and dressed up. “We put a lot of love into this car looking for details,” Keller says, pointing to the quartet of “X” logos hidden on the door panels and the “X3” logo stamped into the car’s B-pillar. Other surprise-and-delight niceties include a “Light Carpet” that illuminates below the doors when you unlock the car at night, three-zone climate control, a larger panoramic sunroof, and a larger head-up display (from the 7 Series). A tow hook is also a factory option in the U.S. for the first time because, Keller says, “The customers requested it a lot.”

Of course, the xDrive30i and M40i are just the starting points for the X3 range. Our spy photographers have snapped what appears to be the first-ever X3 M on the Nürburgring; asked about adding that atop the M40i, Keller smiles and says only, “There’s always room.” Pushed more, he says that the new X3 will have more variants than before in general: “I think this car has a lot of possibilities for a lot of kinds of characters.”

Without getting behind the wheel, it’s impossible to say much about the way the X3 M40i drives, but riding in this car does bode well for the new performance model. It’s also a good first taste of the X3 in general. Improved in every way, when the 2018 BMW X3 goes on sale this fall, it should continue its reputation for delivering luxurious appointments and an engaging driving experience.