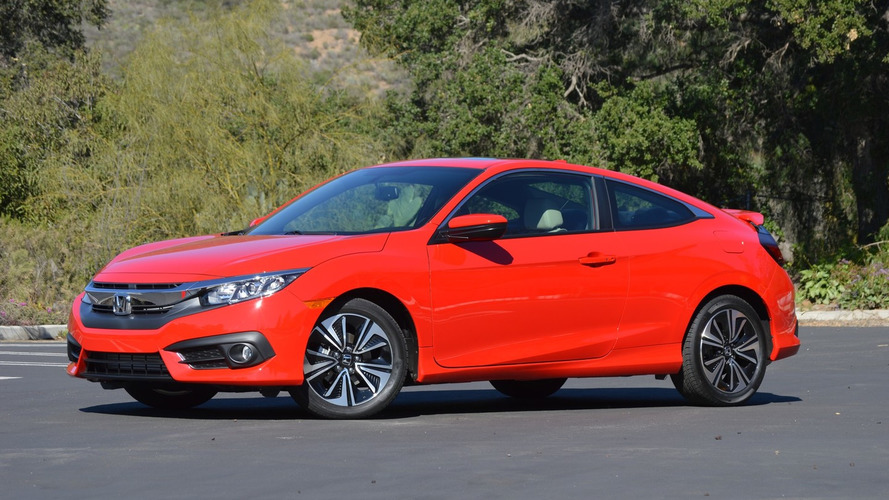 The compact coupe is a dying breed, but Honda's new two door is still pretty killer.

America’s entry-level compact coupe market is a wasteland right now. This is what I’ve come to realize, as I stare at Honda’s scatter plot chart to explain the positioning of the new, 2016 Honda Civic Coupe. There are only three points to track: the new Coupe, Kia’s Forte Koup [sic], and the not-long-for-this world Scion tC. Civic domination shouldn’t be all that challenging.

The full truth isn’t quite so straightforward. Koup and tC might be front-drive, two-door, four-cylinder, trunk-wielding compact, like Civic Coupe, but buyers in the “around twenty grand and I want it to be fun!” segment aren’t likely to be so formally constrained. Basic Mini Coopers and VW Beetles may have hatchbacks, sure, but they’re motive styling statements that could also move the needle for the Millennial buyer Honda is hot to attract. Lingering just a few thousand dollars upmarket, the cheapest versions of Mustang and Camaro have been know to earn twenty-something lease money, too.

So if the question is: Can the Civic Coupe win in it’s exact, strict segment? The answer is, emphatically, oh hell yes. When the question opens up to the larger world around this price point, the answer relies much more on the overall excellence of the new Honda product. The good news there is that the Coupe brand new and based on the excellent, critically endorsed tenth-generation Civic sedan. That means the same powertrain lineup: a naturally aspirated 2.0-liter four-cylinder engine making 158 horsepower and 138 pound-feet of torque or a turbocharged 1.5-liter four kicking out 174 hp and 162 lb-ft. For now, only the NA engine can be had with a six-speed manual transmission – a CVT is available on the 2.0 and the 1.5T, and likely to be the most-purchased piece of kit.

Both engines are satisfying to drive, though the added torque of the 1.5T is certainly noticeable.

Both engines are satisfying to drive, though the added torque of the 1.5T – without much in the way of turbo lag – is certainly noticeable. The Coupe is a bit lighter than its direct competitors, and though it doesn’t haul the mail like a true sports car, it does feel brisk on the hilly roads outside of San Diego.

I spent more time driving the 2.0 version on this trip, however, and I’m glad for it. Though it lacks that down-low turbo urge, it still responds with a pleasing directness when you wind it out over 3,000 rpm or more. I love the “Honda-ness” of the standard engine, even if the turbo is more enjoyable, more of the time. For a non-performance variant, the NA motor also sounds really nice at those lofty engine speeds, so working to keep the lesser-powered engine in its happy space ultimately lets me have a lot of fun.

That effort in search of pleasure is greatly aided by Honda’s excellent six-speed manual transmission, but as I mentioned, at launch that’s available equipment for the base model only. And that’s too bad. I think that even for a more willing, younger coupe buyer, the CVT transmission will be effectively invisible, while helping to deliver excellent fuel economy (31 City / 41 Highway / 35 Combined miles per gallon for the 1.5T, and 31/41/34 for the 2.0). But the variable ratio unit is hardly engaging and can sap the energy out of a good drive if you’re not willing to push. And push you might, if you find yourself in and around the same canyons I just traversed. The suspension isn’t rock hard, and you won’t confuse the directness of steering response for that Si you had years ago, but the car feels quite agile. The steering wheel delivers up a good amount of feedback, though, without feeling busy or overly vibratory. After I first drove the Civic sedan my opinion was that, at the very least, it was a very promising base from which to build the upcoming Si and Type R cars – that sentiment goes for the Coupe as well.

The tail of the Coupe is pert, having some five inches of length chopped out.

Even as a two door though, those buying this Honda are more likely to appreciate the excellent ride quality and great isolation from road noise, then the at-limited handling profile. Someone looking for a rakish bodystyle in an accomplished daily driver will love this machine. The Coupe is quiet and composed at highway speeds, and as able as a commuter device as any compact sedan on the market.

With even a cursory glance at the Civic Coupe you’ll see a striking resemblance to the Sedan… as long as you’re looking at the front of the car. The sheet metal from the front door forward is very close in both cars, with the same chrome nose, slim, distinctive headlights, and strong fender line. The tail of the Coupe is pert, as you’d expect, having some five inches of length chopped out. Honda reps beamingly pointed out that the rear lighting is insanely close the the concept version that was shown at the New York Auto Show last year – no mean feat for a production vehicle. And the result of sweating that detail is, I’d say, as impactful as the designers and engineers had hoped for. From the dead-rear view the arc of red looks both elegant and modern, and should prove to be one of the most easily recognizable nighttime light signatures on the road. A similar front-to-back story is told in the neat interior treatment, when comparing the two-door Civic to its four-door progenitor. As in the sedan, all six-feet and five-inches of me find room to move and a decent seating position, though headroom is much more accommodating in models without the optional sunroof. The design in my forward view could be easily mistaken for that of the sedan, too. There's an attractive, three-piece instrument panel, a bright and good looking infotainment screen, and plenty of soft materials at key touchpoints. (There’s still no volume control knob for the stereo, and an annoyingly laggy up/down button.) Coupe and Sedan are differentiated by some bits of trim in the front, but you’d have to be a student of the marque to care much.

Buying a coupe is a pretty personal thing to do, when you come down to it.

The backseats are usable for someone, I’m sure, but not for a big dude like me. Most people don’t shop for two-door cars if they need practical backseat space, of course, and there’s plenty of room there to throw your gym bag or an extra suitcase.

Honda has yet to announce pricing for the Civic Coupe, but expect that it will come very close to mirroring its sedan-bodied brother. Pricing from about $19,000 for the basic 2.0 LX up to about $27,000 for the full-fat 1.5T Touring is a good guess.

Whether or not that kind of dosh makes sense for a non-performance coupe, for you, depends a lot on your expectation of a sporty-looking model. The practical case is all there: Honda’s got a killer product, a tremendous reputation, and a loyal following to draw from. But buying a coupe is a pretty personal thing to do, when you come down to it. Just how cute you happen to think this car’s ass is – strange as that may sound – is really at the heart of the proposition. If not for that, you’d take your cash and buy a Civic sedan. But as of March, when the Civic Coupe first rolls into dealers, what you shouldn’t do is buy either of the members of the measly competitive set (at least not without a bunch of cash on their respective hoods). Compact coupes may be doing their best dinosaur-meets-ice-age impressions right now, but at least this Honda gets to play T-Rex.