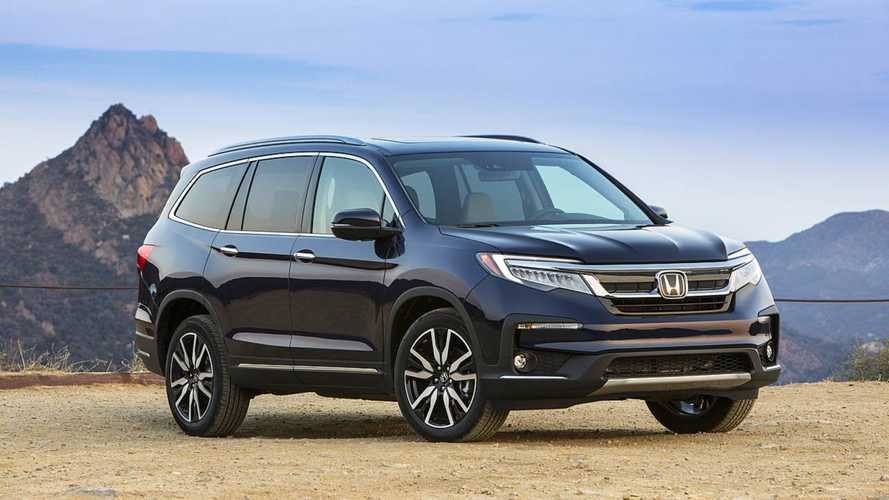 Three cheers for the return of the volume knob!

It’s a pretty rare occurrence when an automaker gets this excited about adding a volume control knob onto a vehicle’s dashboard. But when you’re a Honda engineer, and it’s time to give your popular eight-passenger SUV a fresh round of upgrades, little things like this tend to matter a whole lot. The 2019 Honda Pilot has received a subtle round of updates, both inside and out, that make it an even more accommodating travel companion, and an SUV capable of fending off strong rivals like the Volkswagen Atlas, Toyota Highlander, Kia Sorento, and Subaru Ascent.

While you might need to be a dedicated Honda fan to spot some of the visual changes, it doesn’t take long behind the wheel to appreciate the improvements Honda has introduced for this model year. Exterior upgrades consist of modest styling changes at the front and rear. The face of the Pilot includes reprofiled headlights with standard LED low-beam lighting, a front grille with a more prominent chrome bar that extends into the headlights, along with larger openings for the fog-lights. At the back, the taillights are updated and feature LED backup lights. Honda calls this an “aggressive” new look, but putting a spiked collar on a Pug would probably be more intimidating.

Inside, Pilot drivers are greeted by a new infotainment system that has been made simpler and more user-friendly, especially when it comes to menial tasks such as, say, adjusting the volume. The previous Pilot featured touch-screen controls for this basic audio task, and it was fairly awful in its operation. The eight-inch screen found in all trim levels, except for the base LX model, now has a volume knob, simpler menus, and integration with Apple CarPlay and Android Auto (finally!). The controls for heating and air conditioning are located just below the infotainment screen, and are simple to adjust for fan speed and temperature.

Honda didn’t make any wholesale changes to the powertrain, which is fine because the 280-horsepower 3.5-liter V6 provides solid fuel economy numbers and reasonably peppy acceleration. This engine won’t fool you into thinking you’re in a sports car, but it does have a nice audible edge when you keep the gas pedal planted.

In the range-topping Elite trim level model we drove in Southern California, the estimated fuel economy average was 19 mpg in city driving and 26 mpg on the highway. This compares well with rival three-row SUVs. Pilot’s equipped with front-wheel drive only get an economy boost of exactly one mpg, in both city and highway driving.

Our tester was a fully-loaded Elite model, which basically includes everything you can throw onto this Honda sport-utility. Luxury touches include leather seating, second-row captain’s chairs, a Blu-Ray DVD rear entertainment system, three-zone automatic climate control, wireless smartphone charging, onboard Wi-Fi, paddle shifters, and one-touch second row folding seats. That last feature is invaluable when it comes to gaining quick access to the third-row seats, which are surprisingly comfortable even for adults. Even with the third-row seats in place, there’s still a spacious 16.5 cubic feet of cargo space behind them.

Even with the third-row seats in place, there’s still a spacious 16.5 cubic feet of cargo space behind them.

One thing missing back there is a USB outlet, which might cause a family riot once smartphone and tablet battery levels reach critical. To alleviate potential squabbles, Honda offers an in-cabin speaker system that allows the driver to communicate with passengers throughout the vehicle. This is handy when other occupants are using the entertainment system’s headphones – it pauses the audio when the driver is speaking – but it’s kind of overkill when simply trying to chat. Turning up the volume level results in a tinny-sounding, highly digitized voice. Come to think of it, a menacing Darth Vader-like audio option could ensure the kids truly pay attention. To paraphrase Lord Vader, that would be impressive. Most impressive.

Pilots in Touring and Elite trim are fitted with a nine-speed automatic transmission, versus a six-speed automatic that’s the default choice in the LX, EX, and EX-L trim levels. The best thing we can say about this gearbox is how it faded into the background. During a scheduled pit-stop for coffee, a Honda engineer asked our impression of the drive, particularly the response from the transmission. We struggled to find much to say – a good thing, since auto journalists tend to be particularly verbose when something is really wrong.

On the road, the Pilot is refined and calming in how it eats up miles. With the heated and ventilated front seats turned up to maximum cool, the Pilot delivers a nicely controlled ride that makes this SUV feel smaller than it is. Too bad the steering doesn’t feel like it wants in on the action.

There are several available drive modes in the traction control management system: Sand, Mud, and Snow. But toggling among them only changes the available traction and how power is delivered to each wheel (which range from 18-inches in diameter, upward to 20-inches on Touring and Elite models).

The i-VTM4 all-wheel-drive system is sure-footed and comes with torque vectoring, to send power exactly where it’s needed most. This made for some rapid cornering at city speeds, minus any embarrassing wheel spin and chirping tires. You don’t want to look like a driving maniac when leaving the PTA meeting or Trader Joe’s parking lot, after all.

When pushing the Pilot along some winding two-lane roads, it was as if the SUV was asking us “really, are you sure about this?”

Yet the handling lacks the sharpness and agility found in some rivals, particularly the Mazda CX-9. When pushing the Pilot along some winding two-lane roads, it was as if the SUV was asking us “really, are you sure about this?”

Driven sedately – which is likely how all Pilots will, ahem, be piloted – this Honda proves to be a more willing dance partner. It’s also an increasingly safe one, thanks to the standard fitment of Honda Sensing, a suite of safety features that includes adaptive cruise control, lane-keep assist, forward collision warning with automatic emergency braking, and road departure mitigation. Also standard on all trim levels is a multi-angle rearview camera, along with automatic high beams.

Despite the emphasis on safety and comfort, Honda wanted us to explore the all-terrain prowess of the Pilot. This meant taking laps on a specially designed dirt and sand course, created to highlight the rugged suspension, different modes in the traction control management system, and the Pilot’s 7.3 inches of overall ground clearance.

In practice, it was fun to do, and shows the Pilot isn’t simply a high-riding minivan with a hint of tough-guy attitude. In reality, even Honda’s chief engineer and development leader for the Pilot, Lara Harrington, candidly stated: “We’re not fooling ourselves, we know a lot of people in this segment aren’t going off-roading.” We guess that, for some car shoppers, it’s comforting knowing the muddiest parking lot at the local pumpkin patch doesn’t stand a chance against their SUV.

In terms of price, our range-topping Elite test vehicle came to a total of $49,015, including all options and $995 destination fee. That’s a big jump from the entry-level LX trim, which carries a more budget-friendly starting price of $32,445.

Right in the middle is the EX-L, which, according to Honda, has been the most popular trim level and carries an entry price of $42,655, when equipped with all-wheel drive, navigation, and the rear entertainment system.

While this round of 2019 model year improvements won’t revolutionize the world of family-friendly three-row SUVs, Honda knows staying relevant in the wildly-popular SUV market means constantly tweaking and improving small details. From its relaxing ride and spacious cabin, to that long-overdue volume knob, the 2019 Pilot proves little things carry a lot of weight.