One fifth of the hand-built DB5 Goldfinger production has been completed.

No Time To Die, the 25th title in the James Bond movie franchise, has been delayed a couple of times due to the coronavirus pandemic. It’s now scheduled to hit theaters on April 2, 2021, so it will be a long wait considering it was originally supposed to reach the big screen in November 2019.

Thankfully, Aston Martin is providing some juicy 007 content to ease the wait by unveiling the first five (out of a total of 25) DB5 Goldfinger continuation cars. Hand-built and equipped with a plethora of gadgets, these new-old DB5s are faithful reproductions of the movie car, which has been featured in a total of seven movies so far. The aforementioned No Time To Die will be the eighth film of the long-running franchise to feature the gorgeous coupe.

Originally announced in August 2018 before entering production in May 2019, the DB5 Continuation cars cost £2.75 million ($3.6M) a pop and are chock-full of toys. The fake dual machine guns at the front are our favorite, but the triple revolving license plates front and rear are a close second. Aston Martin has also fitted the 007-spec DB5s with a smoke screen delivery system at the back where there’s also a faux system that dispenses oil.

According to the British marque, the first five cars will be delivered in the coming weeks to customers from Europe, United States, and the Middle East. All 25 planned for production are finished in Silver Birch as a nod to the original Goldfinger car from 1964. The list of goodies also includes front and rear battering rams and an upgraded interior with an actuator button in the gear knob and a fake radar screen. 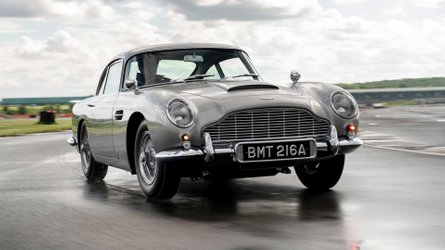 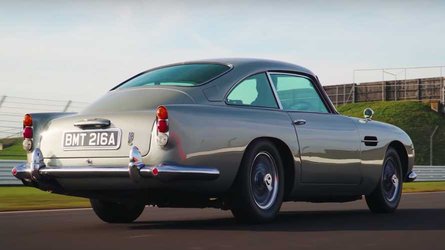 There’s even a telephone mounted in the driver’s door along with a tray underneath the seat to conceal a weapon. To get an idea of how faithful these continuation cars are, they’re created by Aston Martin with the same company that makes the James Bond movies – EON Productions – and also with Chris Corbould, special effects supervisor for the franchise.