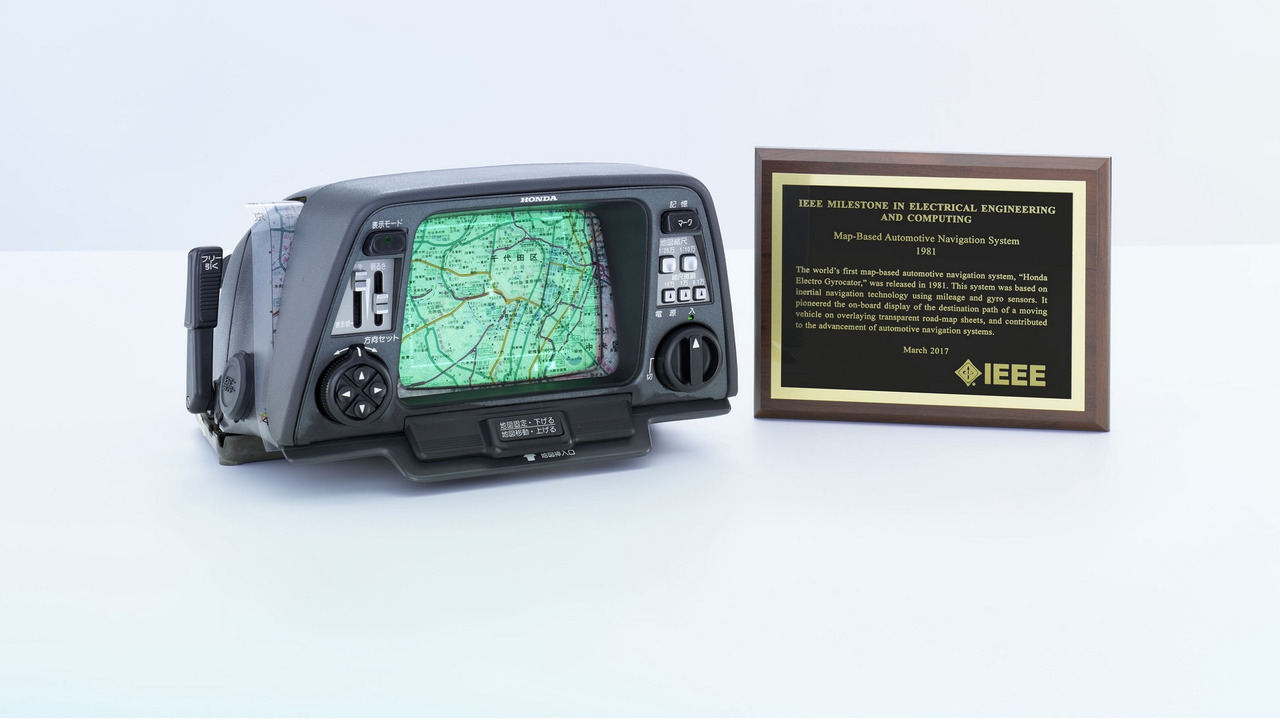 36 years later, the world's first map-based car navigation system is being honored as an IEEE Milestone.

The Institute of Electrical and Electronics Engineers has decided to award Honda with an IEEE Milestone for its Electro Gyrocator, which is largely accepted as being the first commercially available map-based car navigation system. Launched back in 1981, the awesomely named equipment developed in collaboration with Alpine and Stanley Electric was not a GPS since it did not rely on satellites to determine the position.

Instead, it took the shape of an inertial navigation system that used a helium gas gyroscope capable of detecting the direction the car was moving, while a bespoke servo gear attached to the transmission’s housing was in charge of figuring out the distance covered by the vehicle. With the information obtained from the direction and driving distance sensors, the equipment was able to calculate the approximate position of the vehicle.

Needless to say, Electro Gyrocator was not able to provide turn-by-turn directions, but it was still a nifty tool to use and more efficient than conventional maps. Speaking of which, the transparent maps had to be tailor-made to the navigation system and were inserted in a slot and then displayed onto a six-inch cathode-ray tube monochrome illuminated screen. The CRT display provided adjustments for brightness, contrast, position, display scale, and position. The optional kit came bundled with a marking pen to allow the users make the necessary indicators, including the starting point.

The Electro Gyrocator tipped the scales at a hefty 9 kilograms (about 20 pounds) and was only offered on the second-generation Accord starting with August 1981 as a dealer option. It was hugely expensive as the equipment’s price represented almost 25 percent of the car’s value. Unsurprisingly, it was discontinued shortly thereafter.

The origins of Honda’s Electro Gyrocator are thoroughly detailed at the source link below.

A commemoration ceremony was held today at the global headquarters of Honda in Aoyama, Tokyo at 11:00 am and the milestone plaque was presented by IEEE President Karen Bartleson.

The U.S.-based IEEE, The Institute of Electrical and Electronics Engineers, is the world’s largest non-profit organization of technical professionals in the areas of electrical, electronics, information and communications. With over 420,000 members in more than 190 countries, IEEE is the trusted voice on a wide variety of areas ranging from aerospace systems, computers and telecommunications to biomedical engineering, electric power and consumer electronics. With the IEEE Milestones program, IEEE honors historic achievements of groundbreaking innovations in the areas of electrical, electronics, information and communications technologies, which are at least 25 years old and have made a significant contribution to the advancement of society and industry. Since the start of the program in 1983, IEEE has honored 174 milestones*2 in the world before February 2017.

Honda became the first*1 company in the auto industry to be honored by this program, which recognizes that the development of the Honda Electro Gyrocator triggered the global popularization of map-based automotive navigation systems and contributed to the establishment of a global standard for the navigation system.

<About the Honda Electro Gyrocator>
The Honda Electro Gyrocator, commercialized in 1981, was the world’s first map-based automotive navigation system. Honda adopted a direction sensor which was developed as a result of the world’s first*1 practical application of gas-rate gyro sensor for automobiles. The gas-rate gyro sensor detects the direction the vehicle is moving. The combination of this direction sensor, driving distance sensor, microcomputer and other technologies enabled it to detect direction and the distance of the movement, which were used to calculate the current position of the vehicle. By indicating the current location, direction and driving trajectory of the vehicle on a cathode-ray tube (CRT) display where the user placed the map film, it was made easier for the driver to select which path to take.