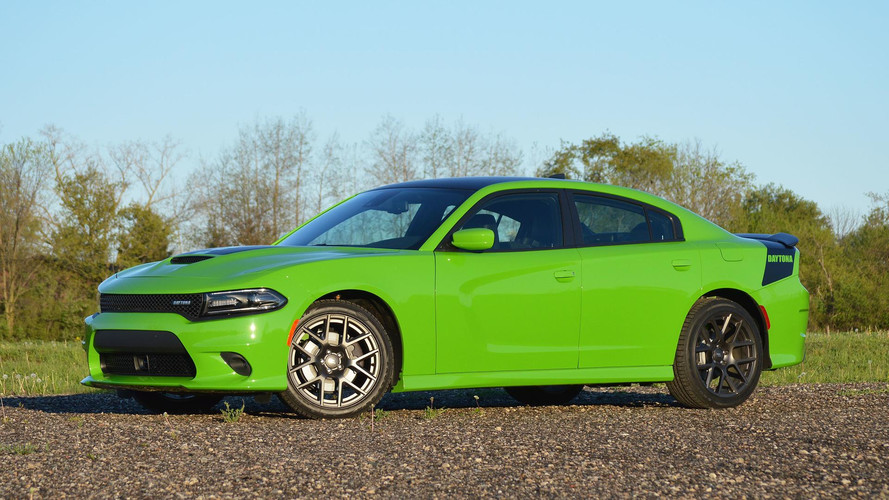 Large four-door sedans are a dying breed. Those with big power and a bad attitude are rarer still.

Big sedans have fallen well out of fashion. With more and more buyers opting for some kind of utility vehicle these days, sales numbers for standard four-door cars continue to drop. So, if you’re going to buck the trend towards SUVs, you’re probably going to need to bring something rather special to your sedan package.

One look at this Green Go Dodge Charger Daytona, big-wheeled and be-stickered in exceptional fashion, and you’ll see that it defies the sedan norm. A special edition, Hemi-motivated Charger is surely not for everyone, but if you think it might be for you, there’s really little else that rises to the level of competition.

Old-school size. The Charger offers a healthy 40 inches or so of rear-seat legroom, making this a performance sedan for the whole family. Compare the three-seat rear quarters to any sedans that may compete with the Charger, and you’ll find the Dodge to be a fair bit roomier.

Nothing else compares. It’s tough to find a real competitive set for the Charger Daytona today, and even the cars that kinda-sorta match up, don’t match up very well. The Ford Taurus SHO is ancient, down on power (365 horsepower vs. 370 hp), and more cramped for passengers. The Chevy SS costs more for its 35 extra horsepower, but even if you’re willing to trade off, it’s dead after this year. After those to American competitors you have to stretch to cars like the Genesis G80 or even the Alfa Romeo Giulia: neither particularly great matchups.

Hell of a deal. Getting close to 400 hp for under $50,000, in a sedan, is unprecedented in the market right now. Anecdotally, I’ll add that the Dodge dealers in my neck of the woods are typically ready to throw a little money in, too, to sweeten the pot. (Watch for Jim Gorzelany’s Best New Car Deals posts every month... FCA products regularly feature in that piece.) There’s a reasonable chance that you could find a Charger with a little money on the hood.

Hemi! The 5.7-liter may be the “little” Hemi in the V8 lineup these days, but it’s still a pretty cool motor. The 370 hp and 395 pound-feet push this big sedan around with authority, while the eight-speed auto ensures that casual cruising is still on the menu most of the time. It sounds good when you give it the spurs, too. And yet...

It’ll surprise nobody that I want the bigger motor. You can get the Charger Daytona package with this 5.7-liter, 370-horsepower Hemi V8, but honestly, why bother? I see the extra five grand spent on the 6.4-liter, 6.4-liter “392” Hemi as one of the better bargains going right now. What, are you trying to save gas?

Trim and tape at its finest. The Daytona package may harken back to Dodge’s NASCAR roots, but at the end of the day this is edition is special for appearance more than performance mods. Yes, the hood scoop is functional. But what you’re really getting are hood and trunk decals, a Daytona badge on the grille (and on the seatbacks), and an unsubtle spoiler out back. Meanwhile, the Charger R/T Scat Pack has what I really want – the big Hemi – without the graphics, for five grand less.

Plastic blacker than the Earl of Hell’s waistcoat. The view forward from the driver’s seat is filled, edge-to-edge, with rubberized black plastic. Short of the bright infotainment screen (which is great), this is a somber cabin that’s going to smell lightly chemical when it off-gasses in the summer sun. At least the dash plastics are soft to the touch; many of the elements in the lower half are hard, easily scratched stuff that simply won’t age very well.

Detached driving. There’s a reason why I harp on getting the best possible engine in your Charger: the other dynamic areas are kind of a letdown. A 4,400-pound curb weight and numb steering make the Daytona a drag in the corners, even if there’s enough tire under me to generate some grip. I have a little bit of fun throwing this big sedan around on a good road, but only until the hilarity of bodyroll-into-power-oversteer loses its charm.