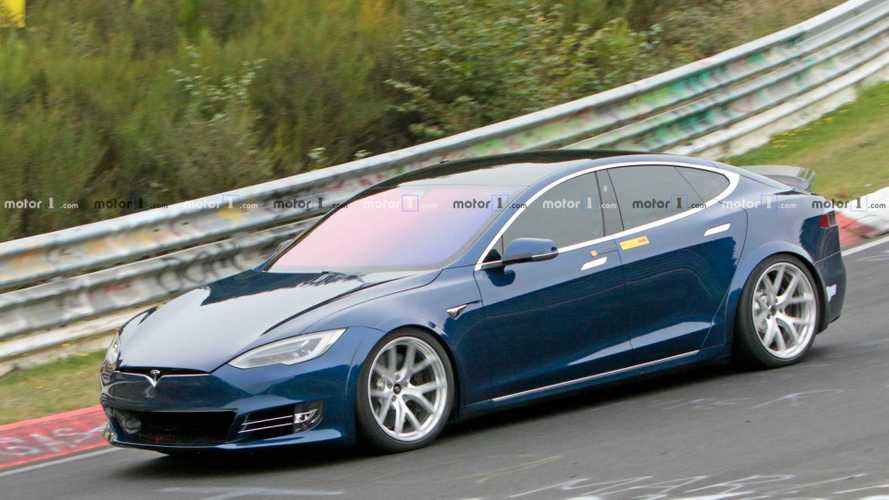 Tesla is already besting the Porsche Taycan’s 7:42 time around Germany’s famed Nürburgring. Unofficially, that is. The news comes courtesy of Auto Motor Und Sport. The German automotive publication reports that the American electric sedan is beating its Porsche-badged rival around the track by a full 20 seconds. This jives with what we’ve heard from our spy photographer at the Ring, who reported a hand-clocked time of 7:23 around the dynamic track by the Tesla sedan.

Well, at least they used to. According to our spy photographer, this blue Model S Plaid prototype (the first one we've seen that isn't red) wears a set of prototype Goodyear Eagle F1 SuperSport RS tires.

Furthermore, the drivers of these cars aren’t any average Joes. Our spy photographer tells us a trio of expert shoes are currently piloting the high-powered and extra-grippy Model S prototypes: racers Thomas Mutsch, Andreas Simonsen, and Carl Rydquist.

Rumor has it that Tesla plans to attempt a record run around the 'Ring tomorrow evening, with a second attempt possibly occurring on Saturday. Whenever the run is done, it sounds likely the Model S on hand will best the Taycan’s Nürburgring lap time, however, it appears Tesla will manage this with a car that’s unlike anything sold by the company today.

Kudos to Tesla for taking the time to make a record-breaking Model S. However, until the company formally sells a Model S with the Plaid prototype’s powertrain and ultra-sticky rubber, then it simply appears to us that Elon Musk and Tesla are playing checkers while Oliver Blume and Porsche are playing chess. At least when it comes to lapping the Nürburgring.