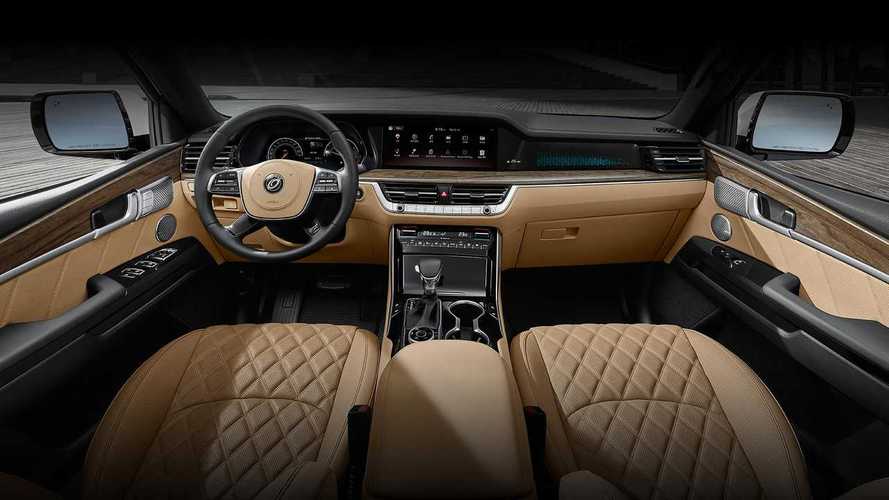 There are high-quality materials and cutting-edge technology inside this body-on-frame SUV.

After a recent teaser, the interior of the 2020 Kia Mohave has a full debut on the brand's Korean market consumer site. For its class and presumed price segment, the surroundings look luxurious in there.

The Mohave offers a 12.3-inch digital instrument cluster, and the infotainment system on top of the center stack is the same size. A wireless charging pad is at the base of the stack, too.

Kia gives the Mohave owners luxurious surroundings by using two-tone black and beige color scheme throughout the cabin, including the dashboard and door panels. Strips of wood also add to the high-end appearance. The first two rows of seating are available with heating and ventilation. Second-row occupants can also use their own separate HVAC controls. The second and third rows fold away at the touch of a button.

The Mohave has a body-on-frame chassis and should be able to handle some off-roading. A dial on the center console switches among six driving modes: Comfort, Eco, Sport, Sand, Mud, and Snow. A low-range four-wheel-drive mode is available from another button.

The only engine option in South Korea is a 3.0-liter V6 turbodiesel. It produces 256 horsepower (191 kilowatts) and 413 pound-feet (560 Newton-meters) of torque and runs through an eight-speed automatic gearbox.

In South Korea, prices for the new Mohave start at 47,000,000 won, which is equivalent to $39,232 at current exchanges rates. While the SUV seems nice enough to stand up to competitors in the United States, there's no indication that Kia intends to bring the new Mohave to America. As a seven-seater, it would likely cannibalize sales from the Telluride, so there's not much of a business case for importing the Mohave.