Reuss tore the nose off that ZR1.

Mark Reuss, General Motors head of global product development, caused a half-hour delay at the beginning of the 2018 Detroit Grand Prix on June 3. In a new statement, the high-ranking exec apologizes for the incident:

"I want to thank you all for your well wishes today. I am ok. I have driven this course many many many times. I have paced this race in the wet, cold, hot, and calm. On Z06’s, Grand Sports, and other things. It is never a casual thing for me, but an honor to be asked. Today I let down my friends, my family, Indycar, our city and my company. Sorry does not describe it. I want to thank our engineers for providing me the safety I know is the best in the world." 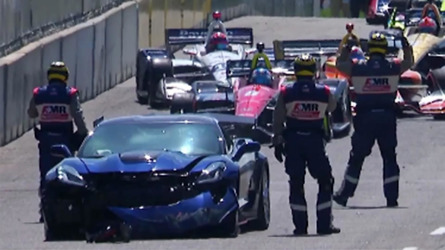 Reuss was driving a new Chevrolet Corvette ZR1 during the parade lap of the race when he lost control of the 755-horsepower (563-kilowatt) coupe. Reuss was exiting Turn 2 of the Belle Isle track when the rear end stepped out after going over a small hill. The car spun, and the front end collided with the wall. The 'Vette sustained serious damage, including tearing off the front fascia and leaving debris on the circuit. Neither Reuss nor the passenger were injured.

Immediately after the crash, Reuss sat in the car for several moments. We suspect he was experiencing a mix of confusion over what just happened and embarrassment of making such a public driving error. The Detroit Grand Prix occurs within sight of GM's corporate headquarters at the Renaissance Center, and the automaker's employees often attend the race.

In case you missed it, the video below caught some great views of of the action.