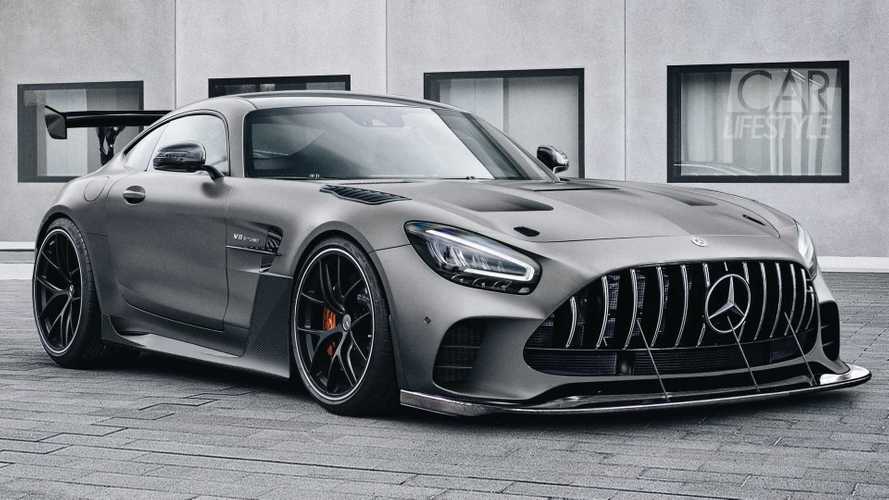 As wild as AMGs come.

All the camouflage in the world can’t mask the aggressive bodywork of Mercedes’ resurrected Black Series. Coming in 2020 as the flagship version of the two-door GT lineup, the most powerful production model from Affalterbach – excluding the One hypercar – has been seen stretching out while still carrying loads of disguise from front to rear. Want to get an idea of what’s hiding underneath the camo? Our friends at carlifestyle have digitally removed the makeup to see into the future of the wild coupe.

From the front splitter, hood vents, rear diffuser, and the two-tier wing – everything is supersized. The extremely low ground clearance denotes the Black Series’ track-oriented nature, but without losing the road-legal status as opposed to the AMG GT-based GT3 and GT4 race cars that are both restricted to the circuit.

Hiding underneath the menacing hood is a twin-turbo 4.0-liter V8, but not the same engine you’ll find in a slew of AMG products. It’s a newly developed eight-cylinder mill that carries over the cylinder heads and block from the M178 V8, but AMG’s boss says it’s not a “typical AMG V8,” nor does it have an electrified component. It is widely believed the new Black Series will have at least 700 horsepower and that might be enough to help the ultimate GT take the crown away from the Lamborghini Aventador SVJ as far as the record for the fastest production car at the Nürburgring.

Considering its predecessor, the SLS Black Series, lost 70 kilograms (154 pounds) compared to the regular SLS, we won’t be too surprised if the hardcore GT will also go through a strict diet to shave off fat to squeeze more performance. Other hardware upgrades will include a newly developed suspension and further improved aero, while lessons learned during the One’s development will be put to good use in the new Black Series.

Expect low production numbers and a high price tag once the AMG GT Black Series will receive its premiere at some point in 2020.

AMG Is Hard At Work: